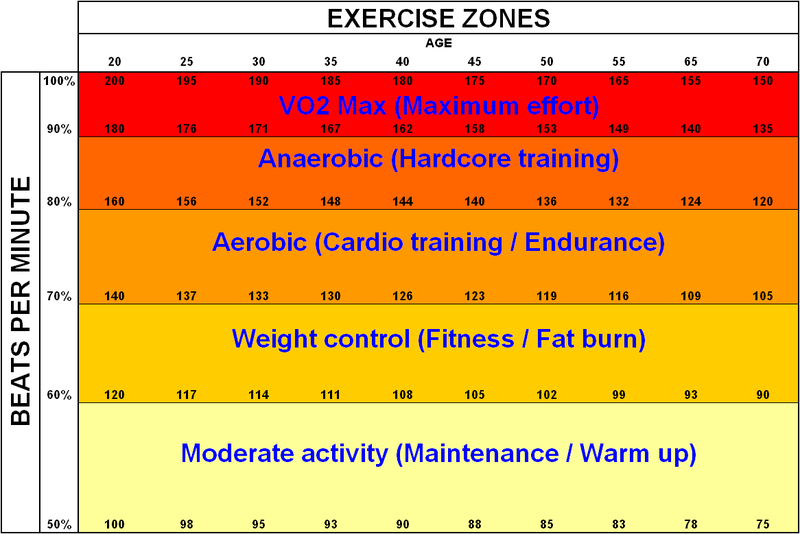 In the aerobic range, your body starts to require more oxygen (for metabolism) so you start to breathe harder. I like to think of this as the point where you transition from normal resting breathing patterns to a point where you need to start focusing on more controlled breathing (I may be wrong about this though). If you stop after working out into your aerobic zone, it will actually take hours for your body to cool down completely (I'm more sure that this point is more accurate). You can see this effect by your heart rate being elevated above normal well after your workout.

Before I talk about anaerobic I want to make one thing clear first, when you transition into the anaerobic range your body doesn't just magically turn off its oxygen-based metabolism and switch over to oxygen-deprived metabolism.

The anaerobic range is just the range where your body is working at a sufficient intensity where it can no longer break down lactate fast enough; so it starts accumulating in your bloodstream. If you had a lab, you could test your blood as you work out to see this effect but that isn't very convenient so I use another technique to gauge.

The way I gauge it is, hop on a treadmill and slowly increase the speed and continually monitor your heart rate. When you're in the aerobic range (and you're warmed up) you'll start to settle into a 'zone' where it feels like you can just keep on going and going and going (because you can). This is because your body is efficiently using its energy stores. As you increase the speed slowly, you'll eventually hit a speed where the running feels like it's getting hard. Like you'll eventually start to wear down and have to focus your willpower to keep going.

I don't really see much point in working out in the lower zones unless you're away from your regular workout environment and want to get in some maintenance. If your goal is to increase endurance for a specific sport (like a marathon) targeting the aerobic zone is probably a good idea. If you're trying to lose weight and you're already fit enough to be comfortable with pushing well into your anaerobic zone (which it sounds like you are), then anaerobic workouts will probably be more effective for you. For the reasons see this or more specifically, the Wikipedia article on EPOC (Excess Post-Exercise Oxygen Consumption.

5
Does working a diverse set of muscles increase metabolism?
4
Which are examples of "higher intensity cardio"?
4
How does my resting heart rate influence my target heart rate?
2
What are the exercises that increases Stamina and Endurance of the body?

3
How long should I be able to stay in HR zone 5?
2
What is the optimal training time for a combined weight training and cardio workout?
9
How do I know if I'm training too hard?
3
How much exercise is "just enough"?
2
What is my target training heart-rate?
5
How long would the training plan from this answer take to get to the level wanted in the question?
6
When should I use incline and speed intervals versus incline and speed ramps?
1
Training zones and training plans
3
What exactly do fitness guides mean when they give a relative V̇O₂max?