Recommended workout duration vs working out with a partner

I've read about / been told / agree with the fact that my workout should not be exceeding around 1 hour, however most of my workouts approach the 90 mins - 2 hour mark because I work out with a partner.

When done solo, I can finish all of my workouts in under an hour 15.

What does the 1 hour recommendation actually cover? Is that one hour of total weightlifting time, one hour of weight lifting inclusive of the minimum rest between sets, or just one hour total regardless of time spent waiting for my partner to finish his sets, waiting for equipment to be vacant, etc?

If the final point is valid, does that mean that me and my friend should work out how to finish both of our workouts in under 75 minutes or so, maybe by using separate equipment?

So the big hubbub surrounding bodybuilding and one hour is the hormone cortisol. This is going to be a bit long-winded, but bear with me.

What's cortisol and why is it important?

Well, first we need to know a little bit about how muscle tissues work in an anaerobic state. (An anaerobic state is where you're working so hard your body can't supply oxygen quickly enough to the muscles: weight lifting at moderate to high reps, high intensity intervals, that sort of thing.)

Contrary to an anaerobic state, an aerobic state is when the muscles are able to use cellular respiration (aerobic glycoloysis) to fuel themselves. In this state, the body is able to supply both oxygen and sugar (glycogen) to the muscle fibers quickly enough, so that the cells don't need to use stored energy to do work.

The "stored energy" part is important. When your muscles are operating anaerobically, they have to use their stored energy source (called ATP) to get the work done.

Now that brings us to bodybuilding. There are two parts of the muscle we care about: the sarcoplasm and the myofibril. Here's a good illustration: 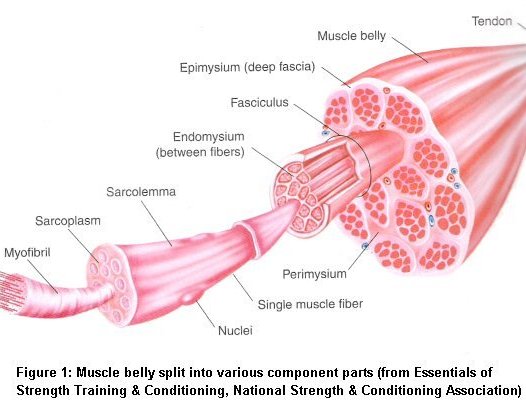 When you're bodybuilding, you are training your body to store more ATP in the sarcoplasm.

Now on to the cortisol. After a certain point in training, your muscle cells are under such stress that they communicate to the brain that there isn't any way to create enough sugar to contract (there's a good diagram of the synapse/muscle fiber structure in the lecture linked above). The brain responds by releasing cortisol from the adrenal gland. This neurotransmitter responds to the cell by telling it that if it needs to, it can start using catabolism for fuel. In this case that means the cells themselves are going to start getting munched up for energy. We don't want this if we're bodybuilding, obviously.

At this point, we reach a huge cacophony of "bro-science" that links various research to cortisol in misconstrued fashions. It becomes really tough to wade through the truth behind the spin (especially when an article is immediately followed by a supplement advertisement).

The idea is (though I haven't been able to find the exact medical paper) that after 75 minutes or so of training, the body starts releasing cortisol. The reason we can't rely on this number is that there are no qualifications on what's considered training, nor the training volume, nor considerations about person's conditioning, nor their conditioned tolerance to cortisol. I'd like to point out that a cursory google search for "cortisol tolerance" should turn up some resources explaining that the body becomes more tolerant to cortisol with training.

Anyway, take this for example: a trainee does one set, waits 30 minutes, does their second set, then waits another 45 minutes before doing their third and final set. Does the body suddenly say, "whoa, whoa, whoa, hold on -- we need to start catabolizing muscle fibers before you can move this weight," and then releases cortisol? We just learned that cortisol (in relation to training) is a response by the body to react to lack of stored ATP in the muscle fiber. The average trainee certainly wouldn't be out of stored ATP after that amount of volume.

Personally, I find the "one hour" notion to be far too subjective to be valuable and would much rather rely on something like training volume. But here's an easy test: if you're losing your gains, it means you're catabolizing faster than you can build. If you're still making progress, don't worry about it.

So is it worth it to ditch your workout partner in favor of keeping your session times down?

I'd say absolutely not. Having a spotter increases your ability to progressively overload because you can get more reps out (especially on chest day). Plus the the psychological benefits of having a failsafe will really help you focus on the exercise rather than stress out (which releases cortisol!). Keep the partner in my opinion.

Not the answer you're looking for? Browse other questions tagged weightlifting workout or ask your own question.

1
Is it possible to workout too long?
28
My legs still ache 3-4 days after legs day
18
Why does cardio/aerobic exercise lead to muscle loss?
17
For the same number of repetitions, does it build more muscle to do fewer sets?
7
Bodybuilding - Myofibrillar and Sarcoplasmic hypertrophy - Building muscles
8
What's the relationship between gaining muscle mass and strength? How do I increase in strength without increasing in mass?
1
Never skip leg day?

13
Troubleshooting "Body By Science" workout
2
Training load on a diet (am I doing too much?)
1
Exercise ball as a complement
1
Is this enough?
6
What should I do if I can just barely complete the lift sets?
6
Can doing the same kind of exercise workout daily provide any good improvements?
4
Just finished 12-week shortcut to size. What's next?
3
Working out with a headache
1
Questions about working out
2
Are warm-up sets redundant with other mobility warm-ups? How to shave time off of lengthy workouts?