I'm training for two years, trying to develop muscles (for astethics, being big and not for strength training).

I read that in order to do that I should work more on my sarcoplasmic hypertrophy. As I'm building a workout plan built on the periodilazion method I want to understand a basic concept.

Until today I believed that in order to develop muscles and being big I should train with as much as weight as possible even for 1-5 reps.

Today I read that in order to develop or work on my sarcoplasmic hypertrophy I should train with low intensity and high volume that is low weights, and more reps (8-12) and more sets (3-5). Am i right ?

I would like to understand what's the best periodilization method division I should use in order to bulk up that is work as much as I can on my sarcoplasmic hypertrophy.

The good news is that there is more than one way to achieve your goals. That means that you can have two answers that vary within a certain degree and they will both be right. In short, there is no "best". The related question that @Informaficker linked to in his comment applies to this conversation.

It's also important to understand that many successful bodybuilders cross train with other sports. Two examples would be Frank Zane and Arnold Schwarzenegger. Frank was primarily a power lifter, and Arnold was primarily a bodybuilder. Yet they both trained together, and they trained in each other's sport. Frank Zane was a beast of a short man, and at his small frame could outlift Arnold. Arnold however, was much bigger in every dimension. There were differences in what they emphasized and how much time they devoted to the other sport. Frank was a better power lifter and Arnold was a better body builder. They were both very strong and very successful.

The reason I mentioned this, is because I find it useful to think about a year in training with the goals you want to accomplish per quarter. In my example, I am primarily a power lifter, but my first quarter of the year was spent doing what I call "base building". It's essentially bodybuilding without being hung up on shape and proportions. In other words, just getting bigger. This quarter, I'm focusing on losing fat while preserving the strength and muscle I've accumulated so far. Next quarter will be increasing strength and preparing for my next competition. And the cycle will continue similar to that for a while.

The program I used for this was called "Big-15", which is how Paul Carter organized his Dogg Crap training over time. The basic structure of the program was like this:

I felt good the whole time. I didn't ever feel buried by the volume, and the light days helped keep my joints happy by getting a lot of blood flowing through the area. This training did wonderful things for my upper body, increasing my chest and arms with my gut staying about the same size. At the end of 6 weeks, you use higher weights for your new 10 or 12 rep max. This worked very well. It's not traditional power lifting training, but I lived in a nice steady 80% or '3' world (referring to my other answer).

It's not the only way to train, but there are reasons why it worked. The related question linked to at the beginning has several charts that show how the body adapts to the type of training you do.

The rep ranges also influence the weight you can use. There are several Rep Max calculations available out there, and each has their own strengths and weaknesses. While using them to try and calculate a real 1 Rep Max (1RM) is sketchy, using them to calculate a 5 rep max or a 10 rep max is fairly useful. The bottom line is that when you compare a 5 rep max against a 1 rep max, it is a certain percentage of that (+/- a couple percent).

If your program calls for multiple sets in that 8-15 rep range, you'll need to take up to 5% off the max to account for the accumulative fatigue. So if a 10 rep max is 77%, but you need to do 5 sets, use 72% of your max. It sounds like a lot of math, but after a while you can feel the weight and know if it's right for the amount of work you need to do. The long story made shorter is that the reps in the program dictate how heavy you can lift.

In order to keep improving, you need increase the work that you are doing. That can be in the form of more weight, more reps, more speed on the bar, etc. The bottom line is that what you did to get to where you are isn't going to be enough to keep increasing size/strength.

Additionally, the body adapts in cycles. You go through a training stress, and the body is fatigued and has to work to compensate for it. It responds by rebuildng itself better than it was. At least in an ideal world. Below is another chart to consider: 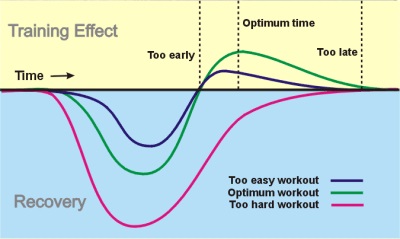 Basically training too light doesn't give an optimal supercompensation to your training, and training too hard is worse. You actually detrain after pushing yourself too hard. This is why I recommend rating your workouts. An 80% day (average day) is decent. A -10% day would be at the bottom of the supercompensation curve. Nothing to get worried about, but definitely don't do anything extra. A +10% day is enevitable after that. The trick is to not get carried away on those +10% days.

If you string enough of those 80% days together, and resist the temptation to go nuts on +10% days, you'll stay in that optimal training curve.

Even though this is not your stated goal, you can benefit from more of a strength training approach for up to a quarter a year just as I can benefit from the bodybuilding training. Strength emphasis looks something like this:

These programs are as varied as the bodybuilding ones. The idea is to build up strength, so you can work heavier with the bodybuilding work and get even bigger. That's essentially what Frank Zane and Arnold Schwarzenegger did. The bulk of their training was spent focusing on what they considered most important, but they cross trained to get the benefits of each.

What Myofibrilar and Sarcoplasmic Hypertrophy Are

Myofibrilar hypertrophy is an increase in the protein pairs that actually contract. These guys are what make you stronger and lift more weight.

Completely and blindly focusing on one over the other limits the amount of gains you can make in either power lifting or bodybuilding. It requires a lot of energy to bench press 300+ pounds once, just as it does to bench 225 pounds a dozen times.

Set your goals and do the type of work necessary to achieve them. Push yourself, but keep an eye on residual fatigue. A good program will push you, and then provide some relative rest to let it breath. A loading phase (or accumulation phase) is about building volume. Volume work can affect the cumulative fatigue levels which is why they are limited in time. Switching then to more intensity based work with much less volume helps manage the fatigue and take advantage of the supercompensation coming. After that, you'll need a period of relative rest.

It's not easy sometimes resisting the urge to destroy the weights. But I learned that lesson rather painfully last year. I finally got to a milestone squat, and in my naivete used a Russian squat program to hit the next milestone up. The problem is I programmed too heavy and my ego caused me to not be able to finish that program. The program works if you know how to use it correctly--which I didn't. I got buried under the volume and the end result was that I was weaker after the program than before. Because of that foolishness, my competition squat was lower than my milestone squat. It took a long time to dig myself out of that hole.

The program you selected will work if you do it as written, and you don't put your ego into it. Think about what weights you can handle any day of the week, your 80% weights as it were. Use those to get started. If after running one full cycle of that periodization program you want to tweak it, you'll know where to make the tradeoffs.

Not the answer you're looking for? Browse other questions tagged weightlifting workout-routines muscle-recovery exercise-frequency plateau or ask your own question.

63
What are the trade-offs of weight versus repetition?
18
Why does cardio/aerobic exercise lead to muscle loss?
12
Recommended workout duration vs working out with a partner
3
How to create a workout routine based on the goal physique?