When I toe-off my feet splay outwards

I am a fairly proficient forefoot runner (10K in 41:30) but I am really niggled about my form. When I toe-off my feet are not in-line with my knee. Is this something that can be corrected?

Here is a recent race photograph of me: 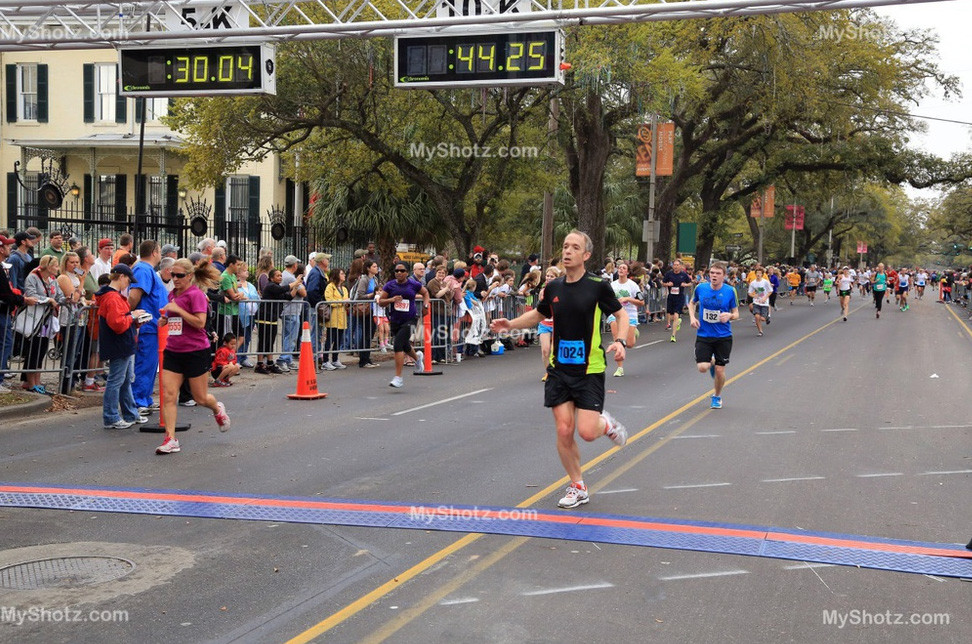 Im assuming your knees also move inwards when you squat. This is the same basic mechanism.

Why do feet splay outwards, and knees go inwards?

The main hip flexor is the iliopsoas muscle, located deep within the hip. It flexes your thigh toward your chest. Or, as in running, moves your knees forward after toeing off. When this muscle is to weak other accessory hip flexors activate to allow you to perform this function. One of the main ones in this respect is the tensor fasciae late (TFL). This is the muscle inconveniently located on the sides of the hips, making it an inefficient hip flexor.

TFL is actually a prime leg abductor (it moves the leg laterally). What happens when it contracts during running is that your knees move slightly inwards during the forward motion (perhaps also during the push-off, as is the case when squatting). This causes a lateral rotation of the tibia; the shins are rotated outwards. Since the feet are aligned with the tibia, the outward rotation of the tibia also makes your feet splay outwards.

What does this mean for you?

In order to correct the imbalance and faulty rotation that occurs at the hip, your best bet is to strengthen the iliopsoas.

How can this be done?

One basic exercise is this: sit on the edge of a chair with your hip and knees bent roughly 90°. Arch your lower back (this is important for all exercises involving this muscle since it attaches there, and thus provides a stable base for its contraction). Then raise one leg at a time as high as you can. This is the closest you will get to isolating the iliopsoas.

Do contractions, or static exercises in that position. Eventually add weights to your ankles, or put them on your knees.

I am a professional sprinter, and at the end of my medical studies, and I can tell you that this muscle is of great importance in running. It has vastly improved my acceleration (which is not that exciting information for you), but also my leg push-off recovery (which should be very exciting news). This has allowed me to increase my top speed even further by allowing my knees to lift higher, the stride to be longer and faster. It has also eliminated my problem from when I started practicing athletics, which is that my knees went inwards during squatting.

Edit: I just read in one of your comments that your feet point outward even when standing still, so I will add a small comment to my answer.

The iliopsoas would help correct this problem while running, but since it is not active when standing still, this suggests some other cause. It is true, what some have said here, that every person has his individual body type, but they can also change (such as getting better posture bu changing the relative strengths of flexors and extensors).

There are two more exercises/muscle groups that could help you: medial rotators and semitendinosus/semimembranosus muscles.

1) Medial rotators are the muscles that rotate your thigh inwards in the hip socket. By strengthening these muscles you can increase the tension they create to maintain the legs, and thus the feet, at a slightly more inward angle.

2) Semitendinosus and semimembranosus are two of the main knee flexors, besides biceps femoris. These three muscles originate from the same place at the hip, but their distal attachments differ, and as such their actions also. Biceps femoris attaches to the lateral part of your tibia (shin). When it contracts, it bends the knee while causing lateral rotation of the tibia over the knee joint. Basically, the feet splay outward. However, the other two muscles attach on the inside part of the tibia, and as such causes it to rotate inwards while running. Your problem could stem from the fact that your biceps femoris is stronger than the semi-muscles, which makes your feet assume the natural position of pointing outwards.

Exercising these three muscles/muscle groups is the only way to correct your problem physiologically and biomechanically. Either try them one at a time, or all at once; incorporate them into your regular strength routine and you might see some progress.

My feet do the same thing but far more than yours do. I've also run a bit farther than most people (albeit very slowly) and it's not a problem.

Gary Moller (a NZ sports advisor and naturopath) advises some exercises to correct this. I tried them for a while and saw little effect - this may have just been me.

There's a lot said about gait but very little science - what little there is disputed. If you have no symptoms of a problem then I would conclude you're fine. However, if that's not the case then I would consult a kinesiologist to get some specific exercises.

There is a running store near me, Runners Lane which does a Gait Analysis. They basically watch your form on a treadmill for a few minutes. Then depending on your gait and foot size, they choose a shoe and "orthopedic" sole that helps to promote proper gait. I'm not sure how researched this is or how much it works for others, but it has since improved my gait, though I didn't have as lateral form as you.

I find that I can really improve my form by consciously thinking about my positioning and watching my feet from time to time. However, I've never ran more than a 10k and at that distance or greater you may be too tired to pay attention to form.

If you are a serious runner this is a big deal. Don't let others tell you that it is what it is. You are adding extra tension and wear on your hamstrings and groin.

From past experience the splay is due to tight hips, gait issues, or a muscle imbalance. Often I would see the "splay" get worse as a runner tired.

I would suggest a few things

You know that if you were just 3% more efficient you would be at a 40min 10k.

Not the answer you're looking for? Browse other questions tagged running or ask your own question.

13
Is it bad that my feet turn outward when I run?

12
How To: Avoid damaging my knee when training for and running a marathon
4
What to do against a burning sensation in my feet during long runs?
6
Flat feet running
13
Is it bad that my feet turn outward when I run?
1
Pain at back of knee when running
10
When running with toe-first technique, should heels touch the ground?
1
Feet turned out while running
2
cycle or swim without injury while training hard for a race
6
What current race distance and time should I use for creating a workout plan?
1
Do curved treadmills help with proper running form?