Recently I discovered the cable pull through as a safe way to train the posterior chain: 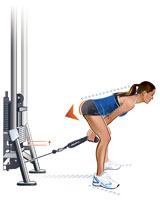 Now I asked me again whats about resistance band pull throughs. Since the forces are different in the cable version vs. resistance band version (constant force vs. increasing force) one might guess that the muscle activation and thus the training effect is different. On might also ask if one needs to use a modified technique for the resistance bands or if one should add another exercise to get the same effect with the resistance bands as with the cables. Perhaps there is a general answer to those questions without referring to a specific exercise (you can substitute many cable or dumbbell exercises in principle with resistance bands).

So I want to know the following specifically to this exercise and in general:

By asking google I already found this passage from bodylastics which doesn't need to be very objective since it's a resistance band manufacturer:

Ideally, you would compliment your resistance band exercise program with weights in order to address eccentric muscle contraction training that is missed with resistance bands.

Not the answer you're looking for? Browse other questions tagged bodybuilding resistance or ask your own question.

16
Is increasing resistance the only possibility to build more muscle mass?
9
Fitness training with varicose veins
2
Good resistance bands for the office?
1
Reviewing my training program exercises for building muscle
4
Resistance training and avoiding chronic injury: are squat/deadlift/bench safe?
1
Tensions of the strength curve
3
Constant load exercise?
1
Which is the role of biceps in a pull-up/chin-up?