Bodyweight exercise for the 'v'-muscle in the lower abdomen

What exercise can I do for developing the lowest abdominal muscles (colloquially named the V-muscles)?

I need something that's bodyweight and I am aware that I'd need to lose some weight until someone can see them.

The 'v' shaped section at the lower abdominals is commonly called the 'Adonis belt' or 'Apollo's belt' depending on who you speak with, however a common (although obsolete) anatomical term for this feature is the 'iliac furrow'.

Unfortunately, the ability to show off an Apollo's belt is very genetic. Rather than being a muscle, its a combination of the location of your hips and certain ligaments in the lower abdomen. The common attribute to a lot of people who show an Adonis belt is low bodyfat, good core development and engaging in sports that involve rotational aspects at the waist - such as martial artists, swimmers, surfers and the like.

The primary ligament that gives the 'v' look is the inguinal ligament that forms part of the femoral triangle which is what gives the 'v' look. The second major anatomical feature that help give this look is a prominent 'iliac crest', being the large bony outcrop of the hips which is generally fixed in size and shape. What both of these anatomical features have in common are their connections to the external obliques, with portions of the obliques joining with the hip at iliac crest and while "the aponeurosis of the external oblique muscle forms the inguinal ligament". As such, you can help stimulate growth in this area by targeting your obliques, however while ligaments can grow, unlike muscles this takes a significant amount of time.

As for which exercises, any bodyweight exercises that adequately stress your obliques should work - examples include the hanging side crunch, windscreen wipers or side planks. Other activities that I've seen suggested are martial arts training with a bag, both traditional boxing or a martial art with kicks will work as both require significant rotation force generated from the waist.

As JohnP points out the transverse abdominus also connects with the iliac crest and inguinal ligament in a similar fashion to the obliques. These are a deep abdominal muscle beneath both the internal and external obliques, and are difficult to target properly. The best way to target these is the abdominal vacuum. 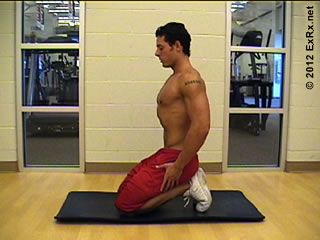 Not the answer you're looking for? Browse other questions tagged abdominals bodyweight-exercises or ask your own question.