I've been strength training 4 days a week for about 8 months. My goal is to increase mass. The usual recommendation for this is to do three sets of 8-12 repetitions for most exercises, and that's what I'm doing. I try to pick a weight so that I reach failure within 8-12 repetitions for each of the three sets, and if I can do 12-10 on each set, I increase the weight. I made great progress in both strength and mass when I was starting out, but lately I seem to be plateauing: on each workout I can only struggle out 0-2 more reps per set than the workout before, and it takes me several workouts to increase weights now.

My question is if continuing like this will efficiently build muscle mass, even though I seem to make very modest strength gains, or do I need to change my workout? (It of course sounds obvious that you need to get stronger in order to encourage the body to build muscle, but maybe it is enough for muscle growth to continually challenge the muscles, and not necessarily get much stronger?)

Some possibilities for change I am considering: changing my routine (I've been doing the same exercises for many months now, mostly isolation exercises); do sets of 6-8 repetitions instead so that I can increase in strength.

Always be changing up your routine at least every couple months. Muscles tend to adapt to the training that you give it, so you must do what's called 'muscle confusion' by using different exercises in different ways. This can mean changing from flat bench press to incline bench press, increasing/decreasing rep range or number of sets, or even trying things like super sets or drop sets.

You've probably been experiencing some really great progress partially due to what we call 'noob gains'. When people first start working out, they'll be able to gain strength and mass at a much higher rate than after a couple months or years. Going forward, your progress may be slower than what you're used to, but keep at it - you're still improving as long as you're trying to increase strength. And when you hit plateau's, just switch things up. The key is to be increasing strength - lifting heavy (with good form, of course) is a sure way to pack on the muscle.

EDIT: I noticed you mentioned you've been concentrating on isolation - don't do this. If you really want to increase mass, you should be doing compound workouts. Here are some exercise suggestions:

The answer is that yes, you can gain muscle without gaining significant strength. While there is some correlation due to leverage, size is a physiological phenomenon whereas strength is more neurological and depends on the efficiency with which your nervous system coordinates the firing of motor units. The keys to growing muscle regardless of what your strength might be are:

Mechanical load - you must increase load from workout to workout, on average, to achieve hypertrophy Chronic progression - you should consistently apply a similar load and not change too frequently or your body will be forced to deal with mechanical and neurological adaptation rather than physiological Strategic deconditioning - per Bryan Haycock "At this point, it is necessary to either increase the load (Progressive load), or decrease the degree of conditioning to the load (Strategic Deconditioning). The muscle is sensitive not only to the absolute load, but also to the change in load (up or down). Therefore, you can get a hypertrophic effect from increasing the load from a previous load, even if the absolute load is not maximum, assuming conditioning (resistance to exercise induced micro-damage) is not to extensive. There is a limit to the number of increments you can add to increase the load. You simply reach your maximum voluntary strength eventually. This is why Strategic Deconditioning is required for continued growth once growth has stopped (all things remaining equal)."

To summarize, you don't want to change workouts too frequently but eventually you'll have to, and load is king so a training methodology where you can consistently increase load is going to work the best. That means perhaps starting at higher reps, lighter load and progressing to fewer reps, heavy load and then starting over again in what is known as "stair stepping" or "pyramid", i.e. for bench I do 200, 220, 240, 260, then fall back and do 205, 225, 245, 265, etc. to progress.

I know some people want the science so if you really do go out and read the journals, here's a boat load of references Bryan Haycock gave me in an interview many years ago (he developed Hypertrophy Specific Training/HST which is a method based specifically on the science behind hypertrophy or muscle building)

As @Nick mentioned, there are a couple of changes to suggest. Switch up your workout, with a focus on compound lifts. Stick with a tried and true workout if you don't feel comfortable making your own. I suggest Starting Strength or Stronglifts 5x5.

I would also suggest lowering your reps to 5. Five seems achieve the maximum effect for training (From the starting strength wiki). 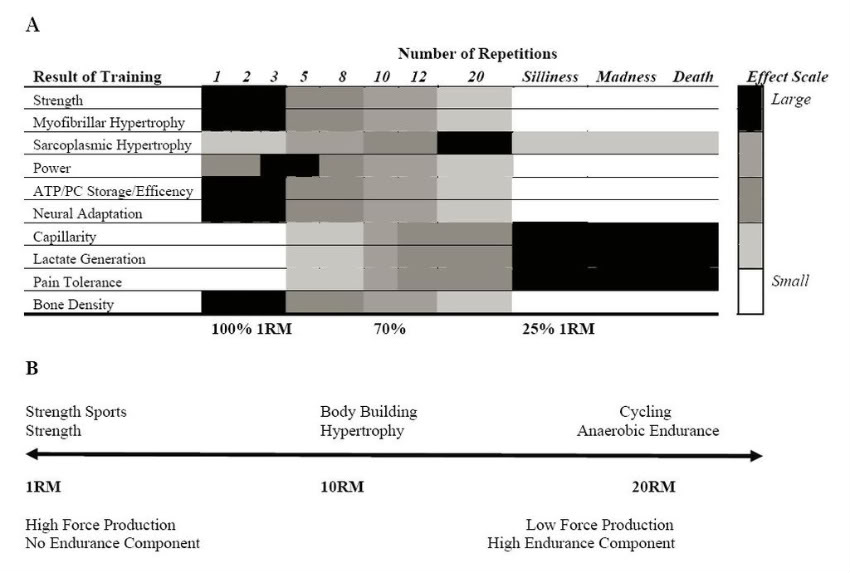 8
Is it effective to do 2 sets for size and 2 sets for strength?
2
Running out of energy before feeling muscle stress
0
Does loading and unloading weight help build muscle, lose fat and develop strength?
2
Is 6 strength workouts a week always a bad idea?
2
Nutrition Planning Help for Lean Muscle and Strength
3
What is most important for strength: frequency or volume?
4
Slow training versus Explosive training