I train Olympic weightlifting (clean&jerk, snatch) as an amateur. For competitions and to be able to do the exercises properly, I need to be able to stretch my arms while they are overhead holding the bar in such a way that my arms do not look bent. Currently some people tell me my arms look a little bent when they are supposed to be straight. I feel my arms are as straight as they get with my current level of flexibility.

What is the best way to stretch my biceps muscles (which I assume are preventing me from straightening my arms)?

I do not want to stretch my biceps tendons instead of the muscle by selecting the wrong stretching exercise.

I always refer to yoga anytime I need to find a good stretching move. Please check the move below:

Position: Seated, legs out straight. You yogis can criss-cross-apple sauce if you want to :) . Place palms down, fingers backward about a foot off the hip. You can play with how it feels to pull the palms off the floor and stretch the fingers long.

Motion: Keep the arms straight and lean backward toward the floor. To maximize the stretch you really have to straighten the arms. If bending the arms can’t be avoided, move the hands further from the hips to increase the stretch.

Stretch Tip: The best way to get deep into this stretch is to sit on a mat while keeping your hands on a hard surface. If you find your backside slipping out from under you, brace your feet against a wall. 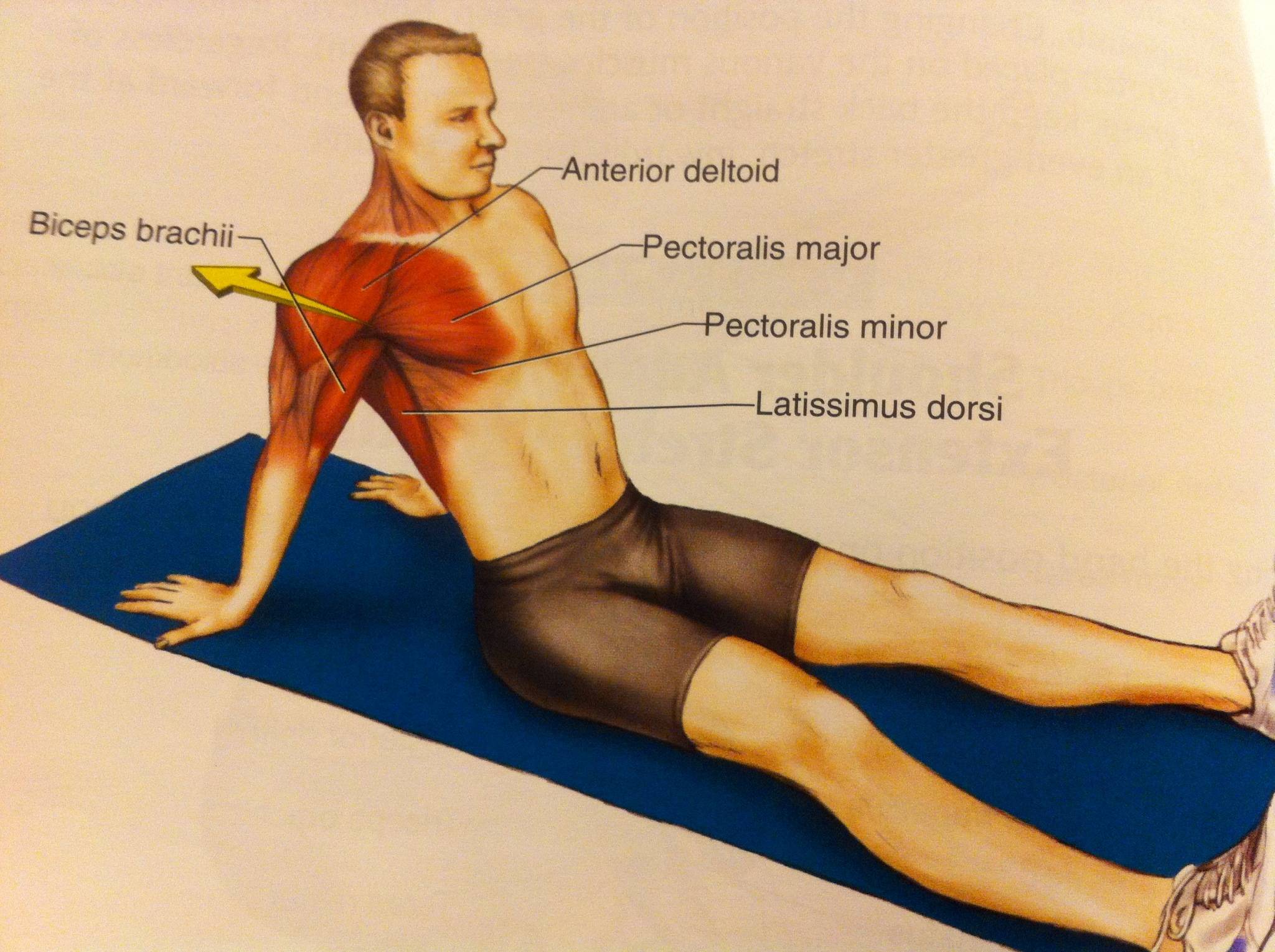 I'll preface my answer by saying I'm not a weightlifting coach, and if you don't have one I highly recommend finding one while you work out your form issues. That said, as someone who trains for strength, there's some pointed questions I have to ask.

I understand hang/power snatches are very different animals from true Snatch (with full squat). However, the issues I've run into with hang snatches that are similar to the issues you seem to be dealing with have to do with shoulder flexibility or triceps weakness that had to be corrected. If your shoulder is tight and you can't get the bar where it needs to be, you almost have to bend your elbows to compensate for the balance problems that causes.

An exercise that can help with both issues is a behind the neck snatch grip press, or sometimes known as a Klokov press. You may have to start with just a PVC pipe while getting used to the motion--same as some coaches would start you off with as you learn the motion (such as Mike Burgener).

Another exercise that can help with both issues would be a snatch balance. It's similar to the Klokov press, but is much more explosive.

An article by Dan Pope about Mike Burgener's warmup routine looks like another good resource. For Olympic weightlifting advice, both Mike Burgener and Glen Pendlay are some of my go to resources. You'll also see that the article references the same Klokov video I linked to above.

There is one more video I wish I could link to, but due to copyright issues I can only tell you how to get it. There's a book called 365 Strong by Brandon Lilly that you can purchase at the Juggernaut Training store. Brandon Lilly is a power lifter and strong man, but in the book is a link to a video you can download and watch on how to "Mobilize like a Weightlifter". The instructors are part of the Juggernaut team, but there's some good stretches that deal with both the shoulder and the arm flexibility at the same time. The one that I'm thinking of that sounds like it would apply best for you is described below:

That particular stretch helps stretch out the lats, delts, and biceps. There are other good mobility tips in that video, but this one should help a good amount.

Not the answer you're looking for? Browse other questions tagged weightlifting stretching biceps or ask your own question.

10
Joint impact of ATG Squats
6
Exercises/training techniques to improve back posture during deadlifts, cleans, etc
1
Right biceps is bigger than left biceps!
0
Chalice Squat Variation - Safe and Effective?
11
Why does Dmitry Klokov stagger his feet?
6
Program Feedback
3
What would be drawbacks (apart from pain) and benefits to go to gym with sore muscles?
1
Is there a Fullbody Training which can be done in 5 Minutes or less?
3
Power Clean Form Check (and technique questions)
2
Snatch: Mind Cues to Improve Hip Contact and Prevent Bar Swinging Forwards