While people are very quick to jump on the adage that "abs are built in the kitchen", there are some people for whom additional help is required.

Its generally acknowledged that a healthy, low-body fat percentage is an important for showing off abs, however while you can lower your levels of body fat, you can equally increase your muscle mass.

While spot reducing as been shown to be a myth, surely altering the localised ratio of muscle to fat will show some improvement. Consider, if you had fixed volume of fat around your arm, if your biceps and triceps grew, while this volume remained the same, the thickness of the fat around the arm should surely drop, improving the visibility of the muscles. Surely, it would be the same for your abs.

Additionally, while the core make be worked during other activities, such as squats and deadlifts, the extent to which the abs will be to support these activities. Again, while deadlift engage the biceps when holding the bar, I doubt people would recommend deadlifts to improve bicep size or shape.

Lastly, Dr. Stuart McGill has come out with strong evidence that crunches (or activities that involve lumbar flexion) are strongly associated with poor lower back health. However, the advice that situps and crunches (weighted crunches even) builds abs is still passed on.

As such, the question is this:

Assuming one already had their diet in order with a reasonably low body-fat percentage, what exercises and with what set and rep ranges, should one do to safely improve the size and strength of the muscles in the abdominal region, focusing specifically on the abs and obliques?

Wood choppers - with an emphasis on obliques this exercise is a great core-worker. Obliques core shoulders are all hit with this twisting pull/push motion. I actually enjoy this exercise and it is quite taxing on the core. I usually try and do 30 reps per side. In my initial progression I went too fast, loaded 50lbs threw out my shoulder. I would recommend a lighter weight maybe 20-25lbs on the cable initially. As you feel your core developing add weight. I didn't really progress in reps, I think 30 per side x 2 is good enough for this, especially if you follow up with one of the other exercises listed.

Weighted crunch Machine - I am able to crank out about 100 of these in sets of 20-30 with 100lbs of resistance, and this has made my abs.

one-arm pressing exercises or twisting exercises both force you to brace your core, which makes your core an important part of this exercise.

If all trunk-flexing exercises are out, I think you need to ask McGill what's left. He seems to recommend a modified lumbar-spine-neutral crunch called the "curl-up" alongside the bird-dog and side plank:

[McGill suggests] a core exercise program should emphasize all of the major muscles that girdle the spine, including but not concentrating on the abs. Side plank (lie on your side and raise your upper body) and the “bird dog” (in which, from all fours, you raise an alternate arm and leg) exercise the important muscles embedded along the back and sides of the core. As for the abdominals, no sit-ups, McGill said; they place devastating loads on the disks. An approved crunch begins with you lying down, one knee bent, and hands positioned beneath your lower back for support. “Do not hollow your stomach or press your back against the floor,” McGill says. Gently lift your head and shoulders, hold briefly and relax back down. These three exercises, done regularly, McGill said, can provide well-rounded, thorough core stability. And they avoid the pitfalls of the all-abs core routine. “I see too many people,” McGill told me with a sigh, “who have six-pack abs and a ruined back.”

McGill's recommendation isn't designed for your purposes of hypertrophy, but that seems to be because he intentionally disagrees with your goals.

In terms of programming these exercises, McGill's recommendations tend toward the extremely easy:

In general, we recommend that these isometric holds be held no longer than 7-8 seconds given recent evidence from near infrared spectroscopy indicating rapid loss of available oxygen in the torso muscles contracting at these levels--short relaxation of the muscle restores oxygen. The evidence supports building endurance with increased repetitions rather than holding time.

It appears low back exercises have the most beneficial effect when performed daily.

I don't see why a lack of oxygen is considered dangerous or unproductive. I also don't think you're going to see much hypertrophy from sub-10-second holds of these exercises.

I don't really think that McGill is correct in tossing all trunk-flexing exercises, and therefore I would ask whether you think weighted sit-ups, L-sits, and leg raises are verboten. More intensive ab training (which includes McGill-forbidden lumbar flexion) seems fine to me if paired with intensive lumbar strengthening work like the always-beloved squats and deadlifts.

As for "defined abs" just lose enough bodyfat to "see" your abs so in that case... NO EXERCISE by itelf gives you defined abs you just need to lose fat with diet and exercise (cardio and intervals)

Here is an image which describe how to focus different parts of your abdomen. 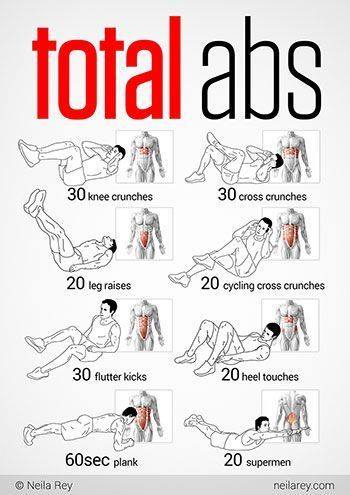 0
Tips and tricks for abs
1
Exercise Ball - build huge abs?
18
How can I get more "toned"?
14
Running and six pack abs
6
Exercise for six pack abs
3
How commonplace are routines like phul/phat/gcdlz among pro bodybuilders/fitness models?
2
Abs are built in the kitchen, but what about obliques and lower abs?
0
How can I increase ab depth and size?

14
Muscle building exercises without looking like the Hulk, think toned and defined
12
Are crunches an effective exercise for building the abs?
0
How can I increase ab depth and size?
1
Can I add in some core exercises to SL 5x5 and what do you suggest if so?
10
Critique of my prep for a bikini competition
1
Is it good for training upper and lower abs in alternative days?
0
Adding a 4th day, how to alter my current routine?
0
Dislocated left shoulder, which core exercises are safe?