How to win in an arm wrestling?

Is there any trick to win in an arm wrestling or any training or exercises we can practice to excel in it?

Regardless of what the sources say, winning in armwrestling is mostly based on, at least from the perspective of the biomechanics of your arm, your wrist, hand, forearm, biceps, and chest strength. Supporting muscles are the shoulders, lats, and even triceps.

The key aspect to winning can (and usually is) be observed as a combination of skill and strength. In professional comp. most armwrestlers try to get an edge on their opponent based on varying grip positions and fast-twitch muscle fibers to get a leverage/torque advantage over their opponent: 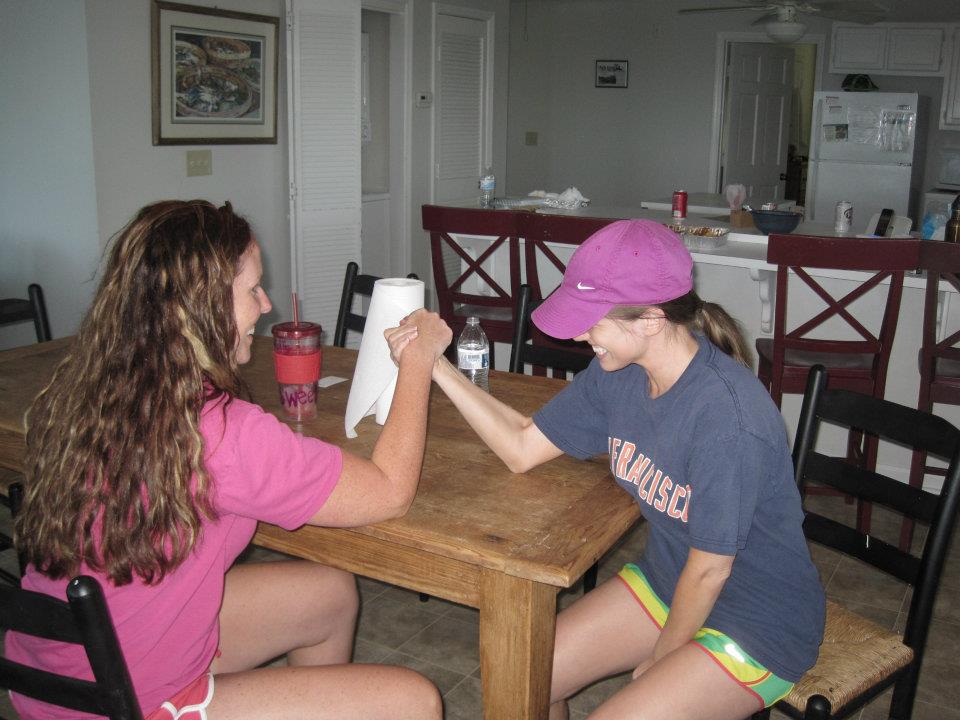 Variations that can make or break good positioning can be: stance of your feet, angle of the difference between two arms(e.g. picture above clearly shows the woman on the right in a disadvantage), and body positioning(i.e. how close your arm is to your body can affect your lat's pulling ability).

While strength is key, speed seems to rule out as, if you've seen pro matches, the winner is usually faster, but may not exactly be stronger(e.g. applying torque a split-second faster, moving the arm out of comfort, and placing the opponent in a very delicate position is usually how most win).

All in all, a good indication of strength is not done with armwrestling. As one person loads stronger than another can lose to them at armwrestling, armwrestling is not a very accurate measure of upper-body strength(especially with so many varying factors).

There is an article on LiveStrong relating to arm wrestling.

As I have been asked to summarise it (in case the link goes dead):

Lock your elbow tight against your body after gripping your opponent. Your biceps and triceps stabilise your arm in this position.

When your opponent's hand is past centre (i.e. you are winning) rotate your body so it's positioned slightly outside your wrestling arm. This allows you to utilise your shoulder muscles, especially the posterior deltoid, to push down on your competitor's hand. Your (upper) back muscles contract and add force to your shoulder muscles, stabilising them as you rotate your body.

In addition, this is where your chest comes in (pectoral muscles). Tightening your abs will bring stability - hence why deep-lying core muscles are important and why I suggested something like plank exercises.

In pro armwrestling, it's a combination of speed AND strength, combined with technique.

In non-professional armwrestling, such as where both opponents don't quickly try to turn an upper-hand and throw the other over, it's definitely based more on strength and power since neither may know any techniques in the first place. Given the flux of continuous arm power and torque distribution from such various positions and angles of two arms, plus the application of force at that one specific time (including biomechanics, such as arm length, hand size, and the elbow's base to the end of the arms and shoulders, as the elbow is the pivot of the force), two amateurs may very well struggle to pin another's arm, even IF one is more powerful than the other. Usually, a significant strength difference is required to pin the other's arm due to these factors. For example, almost any adult can probably pin a little kid without much difficulty -- but try pinning someone who is close to your strength or a little above it -- chances are you'll tie each other, or whoever throws the towel in might be the loser.

The reason this is true is also because, strength and power output aside, the length of your arms, size of your hands, and placement of your shoulders could give you a disadvantage in the mechanical motion of applying force against the other person, regardless of strength overall. In this case you will need to be significantly more powerful to drive their arm down -- probably close to twofold.

Here are some advantages/disadvantages from a Physics standing point:

1.Long arms require greater torque to rotate and pin down. Even if your opponent is weaker, if they have longer arms it will take more torque as a counter-force in relation to their power output to get their arm down -- the opposite with shorter arms. A lot of or a lack of strength is the only way around this.

2.If your opponent has much larger hands, it immediately gives you a disadvantage -- especially if their hands are stronger too. Why? Because the hands are the points of contact. All force you drive against each other is exerted through the hands. With hands at a disadvantage your whole point of exertion is challenged. If the strength difference in the hands and size is minimal, this shouldn't make too much of a difference -- but note that bigger, stronger hands can make it very challenging.

3
10 days to a 5K run
6
How can I reduce trembling during training?
7
Training exercises to increase speed and strength
7
How can I best modify starting strength to fit with a team practice schedule and cardiovascular conditioning?
5
Training Methods for Climbing a Suspended Rope
5
How should I train to increase my push-up maximum from 20 to two sets of 100?
2
How can I train legs when I have hip dysplasia?
5
How often and how long should yoga be practiced for optimal health benefit?
2
How can you strengthen lower back at home?