My eight-year old daughter is playing soccer. She's not terrible but she is just slow compared to all the other girls. Any ideas on exercises or drills that can help her run faster? Never been much of an athlete myself so I have limited knowledge in this area.

She's probably just not as developed neurologically as some of the other kids. Drills for quick foot work is what she'll need to work on the most. She'll need to practice with lots of repetition on a daily basis to show marked improvement if other girls her age seem to be preforming above her skill set right now.

If you have a wall she can kick the soccer ball against over and over, she'll be able to get a lot of practice in that way. You can play with her sort of like racket ball, with a soccer ball. That's probably the easiest way to get her interested in working on it.

Of course any old school foot ball drills would be the number one way to improve footwork. Ball and Chain, Karaoke, high knees, but kicks, skipping, and bounding. They're tough to explain in words, but they're pretty standard drills that you shouldn't have trouble finding video of on line.

To increase running speed, you'll want to target the "posterior chain", which includes hamstrings, glutes, lower back and abdominal muscles.

Since this question pertains to your daughter, I will avoid any weightlighting exercises since weight training at such a young age is controversial and is generally not advised.

Instead I will try to focus on body-weight exercises. I would use a mix-and-match the following exercises:

Hit the hill, but make it fast and short, and you get the maximum amount of training effect with the minimum amount of injury risk. "The best way to recruit fast-twitch muscle fibers is to run at max intensity," says Hudson. "The best way to build leg strength is hill running. So we run all-out up a steep hill. But we keep it to 10 seconds to avoid producing lactate and becoming fatigued." Running no more than 10-second repeats also reduces injury risk by limiting your fast-running time. And hills by their nature lessen the risk of injury because the slope shortens the distance you have to "fall" or land, reducing impact. "Studies of sprinting uphill show that the muscles are in constant 'overload' and the nervous system is firing hard," says Hudson. "It's the same speed benefit as track sprints, but safer."

This is just personal experience, over the past few months I started doing a large number of squats three times a week.

I play soccer all year round.

I have an increase in take-off speed, I can run at higher speeds later in a game and I also feel my thighs aren't as sore during recovery.

Disclaimer: You will need to figure out personally what a reasonable number of squats your child should be doing or if this is suitable for someone her age.

Some kids' motor skills develop at rates different than the other kids their age. This is a somewhat tricky area since in order to develop them, she needs to engage in some repetitious activity, and young children are often not fond of repetitious activity that isn't their idea.

The earlier answer that mentioned kicking a soccer ball against a wall and making a game out of it is a pretty good idea. Other things that will help are (oddly enough) things like playing hop-skotch, skipping, and jumping rope. Anything that requires balance shifts, direction changes, and exact foot/hand placement will work, as long as it's fun for her.

Keep in mind that if it's not fun she won't want to do it enough for it to help her motor skills. And keep in mind that some children simply develop those skills slower than others. I was unable to jump rope until I was like 10. But I went on to play JV basketball, take 5th in the State Wrestling Tournament, 8th in the 100m dash, and 5th in the 400m dash in high school.

I used to play basketball. We had to work a lot on having explosive starts and fast sprints. We did "suicides" to accomplish this. The image below illustrates how it is done in the basketball field. Of course, you can do similar exercises at home by running on the pavement or in the lokal park.

This exercise will not contribute to endurance, and its sole purpose is to enhance explosive, short sprints. 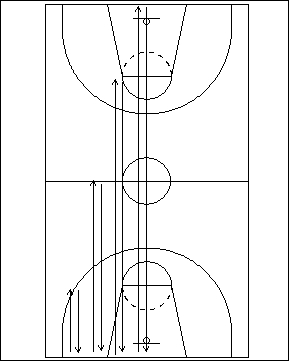 Ever seen movies where the character gets a new body, and needs time to get used to it? That's what growing up is like, and if you don't have enough practice "using" your body, you will handle it incorrectly.

Best advice: find a similar skill level for her to play with, until she develops the skills Natalie talks about. If you can't, then yeah, any level of practice will help develop those skills.

Research documents that in soccer and other "invasion games" like basketball, lacrosse, field hockey, etc. almost all players stare at the player in possession 54 out of every 60 seconds and see teammates, opponents and open spaces for less than 6 seconds. As a result most players are so slow to decide they need to run that they are almost always late and appear slower.

The responses in this post are based on the father's comment that his daughter appears slow. And while the right running exercises that don't bore a child and/or cause overuse injuries are fine, they may do nothing at all to improve her playing speed.

Scan rate and anticipation are easily taught in a simple sequence. The first exercises are eye movement exercises to improve eye muscle strenght and eye teaming. (left/right, up/down and eye rotation in circle exercises). The second exercises are periodic eye scanning exercises using visual and/or audible cues. The third exercises are 3 verus 3 player games where an audio cue is used to instruct all players to scan for opponents, teammates and spaces and as they do they yell out who is where and by color. Colors in this exercise need to wear very high intensity colored shirts because players react faster and passes to teammates in bright colors are more accurate. Colors that should be used for teaching and learning are 00FF00 neon green, FFFF00 bright yellow, FF00FF bright pink, 00FFFF bright light blue and FF3300 bright orange.

Research documents that watching SSG (small sided game) videos also improves speed of anticipation in "invasion sports". In soccer the best videos for girls are watching videos of the Women's Futsal and Futbol Sala World Championships. The game is 5 versus 5 in a very small area and is very fast which forces players to focus and learn. Have player pick one team and each time a player on that team receives the ball hit the || to stop the video. They look and decide what happens next. Repeat start and go through video until it ends. Repeat with same video until player starts to see what will happen next. Both the 2011 Women's Futsal World Cup and 2010 Womens Futbol Sala World Championships can be found on YouTube.

Learning to read patterns in game play, teammate's body language, opponent's body language and to assess opponents strengths and weaknesses can all benefit players ability to scan the field and anticipate. Also picking up tips on what happens most often in game helps. For example most right footed, right handed and right eye dominant players will almost always turn to their right to try to get away from opponents.

The father's observation his daughter appears slow in games may simply be not having learned to read the game, anticipate and to make decisions. Also many girls know what they should do but don't because their parents or coach yell when they make a mistake. Few parents can focus and do their job when interrupted . . . few choldren can focus and learn well when well intentioned adults constantly interrupt them.

There have been a number of suggestions on how to improve running speed in this post. I might add a couple hints

Please excuse the wordy reply but all too often players are slow because the decision to actually do something comes too late.

Maybe she can simply outrun the defenders in one of the last attacks. It's possible to score key goals that way. She must still be willing to perform well at the end, it's difficult after being slower for 80 minutes (or if the other players aren't exhausted at all). Maybe you can still motivate her?

3) once a week run short hill sprints. Sprints should be 10 seconds up the hill followed by a jog down and then followed by a 3 minute rest. Start at 4 or 5 and add one a week until you are up to 10 or so.

It was briefly touched on in another answer, but it really comes down to fundamentals. Too often we think we can just throw a kid into a sport and expect a certain level of performance when the reality is they'll still be developing neuromuscular movement patterns.

The number one thing you could do for your kid is focus on fundamental movement patterns. Marching, skipping and bounding are going to do more for your child than anything else in this developmental stage. If they can't march well, whether that be laterally or linearly, then we can't expect them to run well either.

And stay away from fast footwork. Agility drills are notorious for making soccer players move their feet fast but not their bodies.

At 8 I would not worry about it. She hasn't even hit her growth spurt yet. If she is still slower than others by 11, then worry about it. Many parents had their kids doing all sorts of speed training at 4-8 and by the time the kid is 12, are out of sports due to injury.

Not the answer you're looking for? Browse other questions tagged running exercise-technique or ask your own question.

5
Does exercises other than running help in improving the distance or speed of running?

12
Is this heart rate too high for a beginner runner?
2
Will EPO increase my running ability?
3
How should I proceed with my runnings?
3
Improve running style
2
How far is a good length of running for children?
4
How and why should I use walking breaks for running long distances?
5
Running - Speed vs Distance
4
How can I improve my ability to do speedwork?
2
Improve my running