Is sleep necessary for recovery?

In terms of recovery, is there a difference between lying in bed watching TV / reading and actually sleeping?

Yes, there is a difference.

For example, in the this lecture, sleep scientist Jessica Payne from University of Notre Dame talks about the importance of sleep in the context of fitness (not only fitness).

Sleep is different from just inactivity, see for example the wikipedia article on the topic. In contrast to rest, during sleep the body grows and repairs itself and the brain builds new neural connection much more than when you are awake, which are key to improve physical fitness.

On a personal level, I have started to track sleep as well as workouts and to me it is clear how it impacts how hard I can/should practise and how likely I am to catch a cold. I.e. if I know I will sleep little (travel etc) -> plan to do high intensity training another day.

As an example, here is my sleep data for the last 28 days is included. After the night with very little sleep (a long flight), I only focused on very light training (walk/yoga). 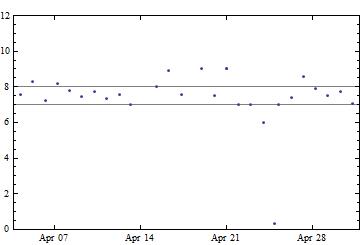 "Tim Ferriss discusses how there needs to be more of a reason than tissue regeneration for sleep. According to Sapolsky (2004), many scientists and doctors believe we need sleep so the brain can replenish its energy supplies. The brain weighs only about three percent of our total body weight, yet it consumes 25 percent of the total body energy expenditure! Deep wave sleep is when energy restoration occurs (stages three and four REM)."

"It’s very important that you don’t watch television or do things right before bed that stimulate the sympathetic nervous system (SNS). Once in a while, you might stay up for a late game, but you will have no shot at entering deep wave sleep while the SNS is cranking. I always have my athletes stretch, meditate, go for a light walk, or listen to some soothing music before bed. These types of activities help to activate the parasympathetic nervous system (PNS). In order for recovery to take place, you must be in PNS dominant mode."

"If you or your athletes are depriving themselves of sleep, a decrease in stress hormones doesn’t occur. Instead, they increase. To make matters worse, a lack of sleep will cause both growth hormones and sex hormones to decrease."

"As sleep is divided into stages, the roles of sleep likely depend upon the stage in question. Non-rapid eye movement (NREM) sleep appears to play a role in the restoration of the nervous system and energy conservation. Rapid eye movement (REM) sleep seems to be important in local brain regeneration and modulating emotions. REM sleep appears to prepare animals for waking behavior; animals awakened from NREM sleep demonstrate impaired sensorimotor function in comparison to those awakened from REM sleep (Horner et al. 1997)."

"Four days of sleep extension to ten hours per night reduced daytime sleepiness (Carskadon and Dement 1982), which might be expected to hinder performance. Kamdar and colleagues (2004) also found this as well as faster reaction times and improved moods after sleep extension."

"Sleep deprivation has been shown to impair the immune and endocrine systems (Reilly and Edwards 2007), which are crucial to recovery from exercise. Acute sleep deprivation has been shown to lower testosterone and aggression in men (Cote et al. 2012), which could reduce motivation in training and blunt adaptations due to the stimulatory effect of testosterone on muscle protein synthesis. Disrupted sleep has been associated with reductions in resting heart rate and core temperature (Vaara et al. 2009), aerobic capacity, and aerobic enzyme activity (Vondra et al. 2001)."

Also look up Chad Aichs. He has written a lot on sleep and lifting.

Perhaps the second article closes the best, "Sleep is something that we should all strive to improve if we value our health and performance."

If you are reading, or watching tv your body isn't completely switched off. This is resting, which is beneficial, but in no way can or should it replace sleep

Yes sleep is necessary for the recovery,but if your lying in bed and watching tv and reading book is not the actual rest you are taking.If you have to recover yourself fast then you must take the proper sleep and rest that your body wants.Watching TV and reading book is not the proper rest of the body in this situation your body is lying on the bed but your mind is not at the stage of rest.So for both the rest of mind and body you must have to take the actual sleep.

5
Optimized sleep schedule and how important is it ?
3
What is the difference between rest and sleep? Can inactivity replace sleep?

3
Sleeping while not lying down
1
Is it better to keep a fixed bed time or waking up time?
3
What is the difference between rest and sleep? Can inactivity replace sleep?
2
Does the amount of calories burned during sleep differ from your basal metabolic rate?
8
Do we need contiguous sleep for gains?
3
Recovery Run vs Rest Day
2
If using bike or jog commutes as active recovery, how much can I push and still count as active recovery?