What are some free weight exercises to isolate hamstrings?

We have tons of squat variations to work the quadriceps and glutes, but I've never seen a free weight exercise to really work the hamstrings. It seems like hamstring isolation is only possible on a leg curl machine. Machines don't work the stabilizer muscles, so a free weight variation would be more complete.

What about doing a Good Morning. 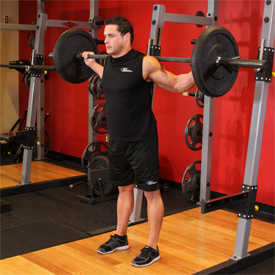 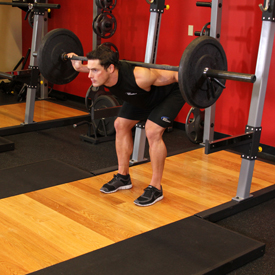 If you use form like in the first link, you'll want to be standing on a raised surface so you can take the motion as low as possible without the plates hitting the floor.

It's optimal if you have a deadlift platform, because it allows you to take the barbell from the rack and go straight into your exercise. However, if you're not lucky enough to have access to one, you'll need to find something else to step up onto. However, it can be difficult and a little bit dangerous to step up from the floor onto a platform when carrying a barbell, so be careful!

And, some advice on getting started with stiff-legged deadlifts:

OP: the hamstring doesn't just bend the knee. That's the function at the knee insertion. However, the hamstring ALSO acts as a hip extensor along with the glute maximus. Hence why RDL/Straight-Leg Deadlifts, Good mornings, etc involving a hip hinge with straight-ish legs works to isolate them well.

The reason a squat uses the hamstrings is because in addition to knee extension (which is primarily quadriceps), there is also hip extension (as you stand up you straighten your hips) which is where the hamstring/glute musculature work together.

That being said, squats are a weak hamstring exercise because the hamstring is still contracted at the knee while simultaneously extending the hip, so instead of lengthening/contracting, it sort of moves "up and down" the back of the thigh as it shortens at one insertion and simultaneously lengthens at the other.

The glute/ham raise performed on a GHD MACHINE (as opposed to the floor) where you actually bend over at the hips at the bottom of the movement, is one of the only exercises I am aware of that causes the hamstring to lengthen/contract at both insertion points together, as opposed to only isolating one joint, or, like the squat, involving simultaneous contraction at one joint and lengthening at another. As such, you could consider it the "king" of hamstring exercises.

A free weight isolation exercise is an oxymoron, I suggest if you want to isolate then use the leg curl machine - that will give you the isolation you desire. 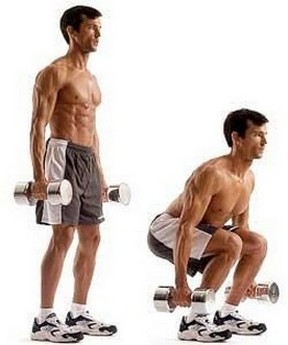 No need to look any further than Squats.....many consider this exercise the King of all exercises. Since your muscles don't work in isolation, you shouldn't train them in isolation. Dumbbell, barbell, body weight and 100 other variations...keep it simple and focus on technique. Free weights always provide more overall benefit than machines ever will.

All existing answers provide good hamstrings exercises, but none of them really isolate the hamstrings. (It is rather difficult to get both "free weights" and "isolation" in one exercise as @Moz pointed out)

If "isolation" is more important, just go with the leg curl machine. If you don't want to use machines, you can use cables to get a good compromise between free weights and isolation. 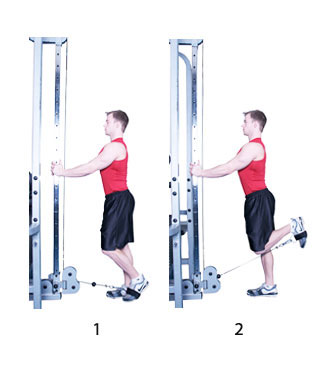 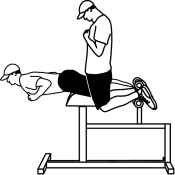 Put one foot on the floor, lift the other in front, keep your body tight and move your hips up. The level of intensity increases as you put your foot higher. Requires no fancy equipement.

It's not precisely free weights, but if you have or use bands then you can attach one from your ankle to a stable spot near the floor and perform a "curling" motion. You'll need to be careful to make sure that you're stable throughout the exercise.

If you truly want isolation though, then I don't know of anything outside of a leg curl machine. As Moz said, it's hard to get isolation strictly with free weights. Even something as simple as a bicep curl is going to be using your back and shoulders. If you start using a curl bench then is that really much different from using a machine? I mean, if you used a bench for your hamstrings that looked and acted exactly like a leg curl machine but with weights, is it really still "free weights" at that point? The only difference at that point is the angle of the resistance.

Not the answer you're looking for? Browse other questions tagged bodybuilding legs hamstring or ask your own question.

4
What are some good leg stretches?
13
Why do compound exercises build more mass than isolation exercises?
9
Compound, total body exercises minimising quad and ham development
2
Help with 3/Week PushPull routine
10
Critique of my prep for a bikini competition
1
Leg curl (hamstrings) machine - legs wide or narrow? Or both?
0
Back issues with single-leg deadlifts
1
Is it normal, after 3 years of weight training, to find the 28kg dumbbells heavier than 16kg when I grab them on the rack?
3
Looking for a replacement excercise for hamstring curl/glute ham raise
0
During squat (front & back), is it mechanically possible to work the glutes more than the quads? How?