Effect of band around arms when bench pressing

I worked out with some guys at my gym last night that introduced me to wearing a band just above the elbows (on the humerus) Below is a picture that partially resembles how I wore the band.

Imagine the band is slid down just passed the elbows on the humerus, and that is how I was wearing the band as I benched. We had the bench at the smallest incline setting possible.

They told me wearing the band would keep the shoulders healthy.

I have never heard of this. I actually felt that there was MORE stress on my shoulders with the band, because I could not go as wide as I wanted (I usually bench very wide).

If this does infact preserve the shoulders as they say, then how?

Or a refuting argument I would be happy to hear as well. 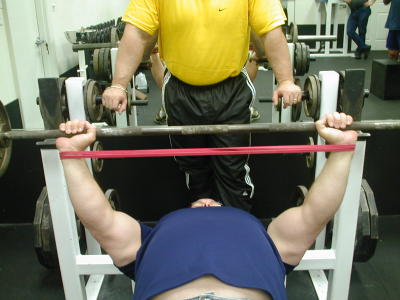 This strategy looks like an emulation of the effect of a slingshot, a device which mainly sees use with people benching heavier weights (300+). I have not used this device, but I've spoken with users and they recommended it, mainly for dealing with shoulder injuries. When a shoulder injury occurs, especially for people benching these sorts of weights, it becomes difficult to do heavy reps as part of a workout, and the shoulder injury can become the limiting factor rather than the person's strength. According to the about section of the linked website, the slingshot (and presumably the band)

work by stretching with you as you lower the weight to your chest, then when you are at the bottom of the lift, the Sling Shot gives you a little extra spring that allows you to get the weight moving again and complete the lift.

One of the users I spoke with benches 450+, and he said he doubted the product at first, but then stated that it allowed him to work through a shoulder injury which had limited him to reps at 225. Assuming that this band strategy is as effective as the slingshot, I would say that it makes sense for use when dealing with heavy reps, especially when recently injured, but in other scenarios may unnecessarily change parts of the motion.

Not the answer you're looking for? Browse other questions tagged health form shoulders health-risk bench-press or ask your own question.

17
Bench Pressing vs. Push-ups
5
What are the pros and cons of board bench pressing?
6
When I bench press, why do my hips sometimes cramp up?
6
Recurring muscle pull in Upper-back/Neck when doing overhead press/bench press - form advice
4
How to create the leg drive and keep shoulder blades together while bench pressing?
1
hamstring pull when bench pressing
2
Bench pressing when your feet are not touching the ground: dangerous? Risks?