I'm doing SL5x5 and, for my without tonight, I swapped the normal Pendlay rows with the incline row machine. I was quite shocked at the weight difference. Normally, I'd be rowing around 115 but with the machine I could only manage about 70 (for the same sets/reps). But I wasn't just arbitrarily playing with the program, I decided to try the machine because I felt I had been cheating on the bb rows by using my lower back and glutes. To try to determine if I had been cheating, I wanted to see how my bb row compared to a roughly equivalent isolation exercise. My logic being that the machine should use every muscle that should be used in bb rows and limit me to only those. Therefore, if I wasn't cheating and all the same muscles are used, then the weight should be about the same. Such a large difference between my bb row and machine row would seem to indicate that one of the following is true:

An incline row machine similar to what I'm using and referring to: 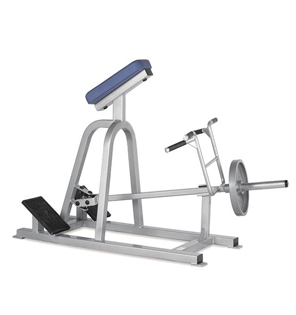 I wouldn't sweat the difference in weights you can do on one versus the other, there can be a lot of good reasons for that. The angles, range of motion, and muscle involvement all shift.

On heavy barbell rows, despite your best efforts, your chest will drop a bit to meet the bar. On the lever machine, you can't get away with that. On a pure row, the weight is going to come up near-perfect vertically, versus on the lever machine it will track on whatever angle the lever is bolted into place. That last aspect alone, the angle your pulling, makes a big difference.

StrongLifts 5x5 (I think) was adapted from the Bill Starr's famous 5x5 dating back to 1976. I know that's where Madcow 5x5 came from, and I assume the lifts for StrongLifts were chosen in a similar fashion.

Either way, the original 5x5 (Bill Starr's) actually called for the power clean. Barbell rows were only substituted later because you can self-learn a barbell row but for cleans most people need training.

I think it's safe to look at barbell rows, cleans, and lever rows as the "upper back pulling" part of a strength training program.

I moved away from barbell rows personally because of the load on my lower back, which is already pretty high from the constant other-lower-back-demanding barbell loads. Once I got to around 225lb 5RM, I flipped to squat cleans and weighted pullups and never looked back.

Barbell rows have put a lot of beef on people's backs, and deserve to be the primary upper back compound lift early on. But a lot of people move away from them for good reason, especially if you do a lot of squat/deads/cleans.

29
Stronglifts - Why is my bench press/row progress lagging behind?
5
Just found a hemorrhoid. Should I lift this friday?
2
Auxiliary exercise to help my inverted rows to progress
5
Is it better to do Barbell Squats with a lower weight or Smith Machine higher weight?
2
Struggling with barbell row and overhead press - StrongLift
6
Program Feedback
3
Don't feel anything with Pendlay barbell rows. Should I switch to Yates rows?
2
Do pendlay rows require the same adjustments as bench presses to avoid shoulder impingement?
5
Stamina Decreasing for Some Exercises But Increasing for Others