Some questions about the deadlift

I have been deadlifting for about a month or so. Just today, I did 6 sets of deadlifts, with the last set at 60kg (132.27lbs) at 5 reps. There is a video recording of me on this last set here.

Upon viewing the video, I noticed that there is a slight rounding in my upper back. In particular, I was told that this rounding was caused by my shoulders being slightly internally rotated during the movement, and not keeping my chest up.

Question 1: Is this a serious cause for concern?

Given that the deadlift is such a complex movement, I often have trouble keeping track of all the things to do. One issue in particular that bothers me is the following:

Question 2: How do I really "power up" with my quads from the bottom?

It seems to me that my quads only really kick into action a little bit off the floor. Perhaps the start position of my butt (at the beginning of the video) is too low? I am tall and have rather long limbs.

Finally, any comments on my deadlift form from the video would be appreciated.

The upper back rounding isn't a big deal. Basically if you're lifting a lot, they're going to round out. It's the same for the lower back too, honestly, once you get up near your max. It's not an excuse for bad form, but if you look at competitive power lifters you'll notice that they're right on the cusp of good/bad form.

Check his form below. If he chopped the weight by 20%, I'm sure he'd have a text book perfect lift, but that's just not what happens at max. Given that it wasn't your 1RM (or even 3RM), you probably want to make sure you're doing rows or other upper back lifts to make strengthen up, although the deadlift will do that for you too.

I know this is antithetical to the "ZOMG KEEP YOUR BACK FLAT!!!" gym world, and you don't want people thinking it's okay to round out, but again look around at competitive lifters and see for yourself what's happening. There's a range between "flat-as-a-pancake" and "spinal injury inbound curvature". 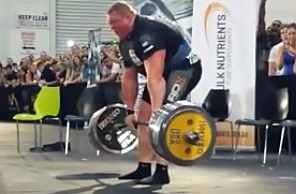 Regarding your quads, I answered a question a while back regarding muscle recruitment in the deadlift. Stealing from it a bit, the study I referenced said:

The [quads] had a peak of activity during the first 20° of the ascent phase due to its role in knee extension and indirectly hip extension (in that the movement is a closed kinetic chain exercise).

This graph shows the ascent to descent, so lockout at the top is in the middle. It shoes quad activation. So once you're off the ground, it shifts from the quads more into the glutes and hamstrings.

I think your form is fine to be honest. You can always noodle it tighter, but you're okay. I'd get rid of those shoes if they're not flat (no running shoes!), and focus on your abs and hip rotators. In my mind before every deadlift:

Your back should be neutral. Not overly arched any which way. Neutral. Your abs do the bracing as much as your back (or at least pretty darn close). As you start going up in the weights, your form will change and you'll have new challenges.

Overall, you have better form than I see in a lot of people starting out, specifically your lower back remaining in a neutral position during the entire lift.

Question 2: My first idea would be to actually pull from the floor. The mats you're using appear to add about an inch or two of space between the plates and the ground, which correspondingly shortens the overall range of motion. However, the conventional deadlift is a hamstring dominant exercise, so adding 'power' to your quads may be a matter of consciously trying to fire them in the movement. If you are looking for more quad dominance in your deadlift, you can try using the sumo deadlift which places more emphasis on your quads, but also requires substantially more hip mobility to do properly (and tends to require more finesse with resetting the bar between reps).

Again, overall, your form is really good for the stage that you're at. One thing that I noticed that you didn't already mention was your bar path. It seems a bit less than straight. You don't appear to be pulling the bar into your legs until after you clear your knees. Pulling the bar into your legs will help keep your lats engaged and upper back tight. Try thinking about bending the bar around your legs as you pull the bar up. This will help you engage your lats (as said before) and allow for a straighter bar path which make the lift more efficient overall.

9
How can the conventional deadlift be harder at the top than the bottom?

7
Is the deadlift necessary for an intermediate bodybuilder?
7
Beginning the deadlift exercise
7
Barbell Deadlift vs. Clean Deadlift
4
Why is the single leg deadlift stiff-legged?
2
Deadlift and Rack Lifts
5
Deadlift form and individual morphometry
4
What is the difference between a Deadlift and a Romanian Deadlift?
0
Is it my grip or is it the bar?
10
At the top of the deadlift (i.e., when you have picked up the barbell), are you supposed to roll your shoulders back?
3
How can we make sure we are engaging the lats in the conventional deadlift?