Does your weight have "momentum"

I'm obviously NOT talking about physics here - obviously your body has mass and therefore momentum.

What I mean is:

I've been tracking my weight over the last 18 months or so, and I know a fair bit about the amount of exercise I've done and my non-meal eating habits (whether I'm snacking more or less than usual)

When I start exercising hard, it takes 3-4 weeks to get a noticeable shift in my weight, and then my weight will continue to drop even after I've dropped back to my "normal" amount of exercising.

It's acts much like my weight is a physical object, that I'm physically moving on the graph, and my behaviour is a force acting on that object with a certain amount of friction/gravity present so that if I do less exercise I reach a stable point and if I stop altogether, I gain weight.

But (I perceive that) the effect is very noticeable.

I could mutter the words "hormones" and "homeostasis" and wave my hands vigorously, but I'd be making it all up.

I like the analogy, and I'll try to explain using it.

If I understand you correctly, let's say your weight is a bowling ball, and your behaviour (diet, exercise habits, sleeping patterns) is the person throwing the ball.

You have this idea that when the bowler has released the ball, its momentum will keep the ball going. In this analogy, we can let the bowling pins be your ideal weight.

Your weight is in fact immediately affected by your diet, so if you change your diet drastically one day, your weight will also take a very sudden turn.

On a bowling lane, this would be the equivalent of the lane AND ball being made of velcro, and the ball being so light that it stops as soon as the bowler releases it. In order to get it rolling again, he has to keep adding force.

This is all sounding very hand-wavy at this point, but my point is that if you're in the middle of a very extensive diet, and you suddenly have a heavy cheat day, this idea of "momentum" isn't going to make your body consume less of the calories in whatever you eat.

Weight loss is a direct result of calories consumed vs. calories spent, over pretty much any time period larger than a day. (Periods shorter than a day is usually subject to other minor influences, and it very hard to track reliably.)

So in the end, as soon as you

you will have to deal with the consequences.

But that's not necessarily a catastrophic failure. Most people who diet do have cheat days, but we tend to account for this by seeing that "even though I have a caloric surplus today (i.e. I gained weight today), I have a net caloric deficit this week (i.e. I lost weight this week) even though I had a cheat day".

I think this is where your idea of weight change momentum comes into mind, and as I said, I like the analogy. It just lacked the key factor of friction.

The analogy could be made even better if this "momentum" was the idea of a person's discipline. If you're very good at structuring your diet and exercise, having a cheat day doesn't ruin anything, because the next day, you'll be back to your diet and exercise, and your weight change will continue the way you planned it. So staying disciplined is what keeps the weight changing.

EDIT: After a pretty rewarding chat, I think what you're experiencing is a deload, which fits pretty well with the idea of momentum.

A deload is where we take a bit of a break from training, whereby we either train very lightly, or not at all, in order to give our bodies complete restitution. It's pretty much like a vacation, because it allows for some time off in order to come back stronger and feeling better.

We use deloads specifically to destroy plateaus, because having an indefinite linear progression is physically impossible. Taking a step back and really letting your muscles and CNS get back to 100% helps prevent stagnation.

And best of all, when you come back to the gym, you'll find that not much strength has been lost. Within maybe a week or two, you'll be back where you left off, but with more energy to spare. That might be why it seems like you're carrying momentum from before your break.

Although the article I linked presents a deload typically as a one-week thing, I've had the same effect from taking as much as two months off, although I wouldn't make it that long unless I had to (work, vacation, other circumstances).

I do concur with Alec's answer but I wanted to give a different perspective.

There are 4 cycles you go through when you train: 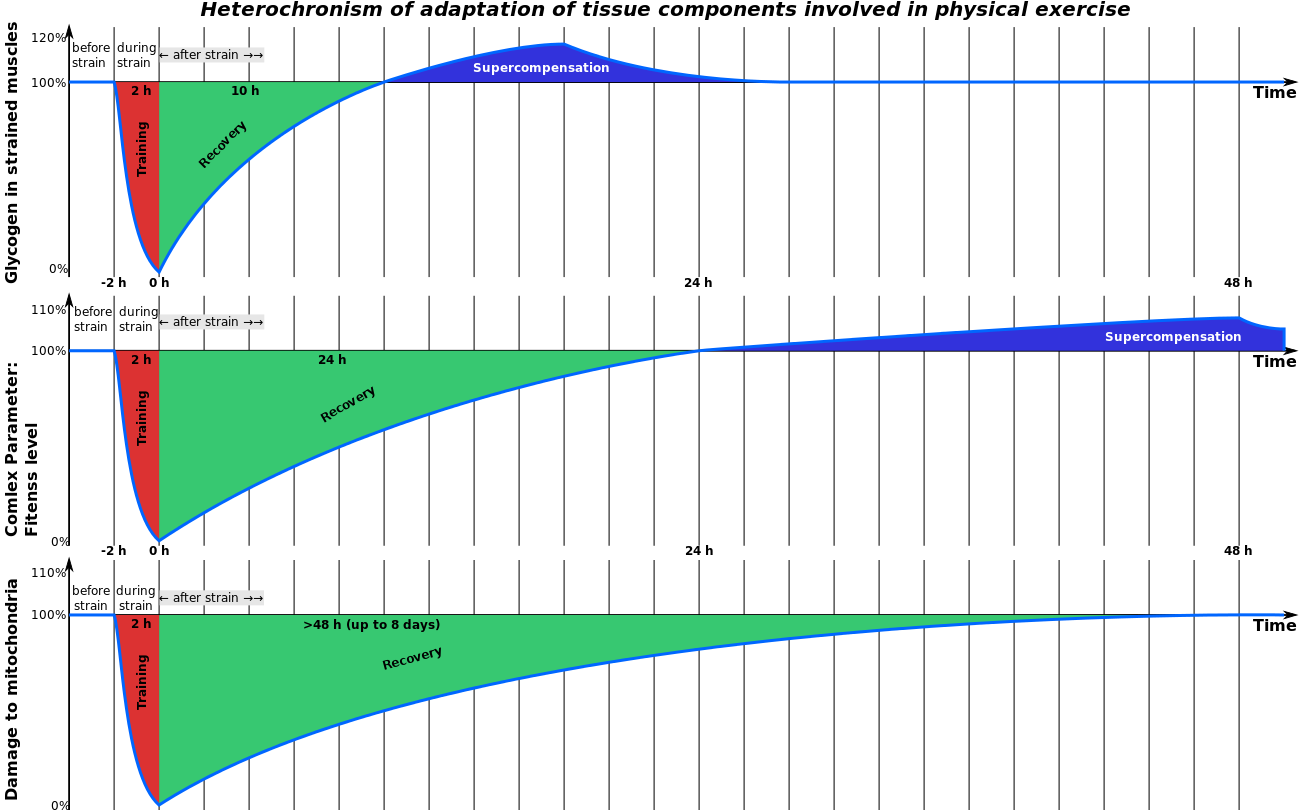 Mitochondria take up to 8 days to recover and have no super-compensation period. So long period of training with no deload can cause the damage to mitochondria to build up to a level where you cannot progress without letting them recover (up to 8 days, depending on individual and diet).

While recovering during this period you are still building muscle which means your body still needs the same fuel you would have been eating while exercising.

If you eat at sustaining calories (maintaining weight); then deload workouts and reduce calories at the same time to your new, lower TDEE then you will lose some weight as your body is still expending more energy to recover.

Not the answer you're looking for? Browse other questions tagged weight-loss exercise diet or ask your own question.

3
Sample Regimen for losing body fat and retaining lean mass
1
Weightloss seems stagnant despite much efforts
1
Does exercising late at night kill your "afterburn"
0
Will someone help me construct a weight loss plan?
8
How can I improve my diet and exercise routine?
3
Ideal weight pursuing
3
How much of a surplus is reasonable? (Help for a new weight-lifter)
0
Losing body fat, carbs, diet and everything