How do you train for multiple aptitudes?

I've seen this infograph that explains what load, reps, sets etc. you will need to do for each goal or aptitude: 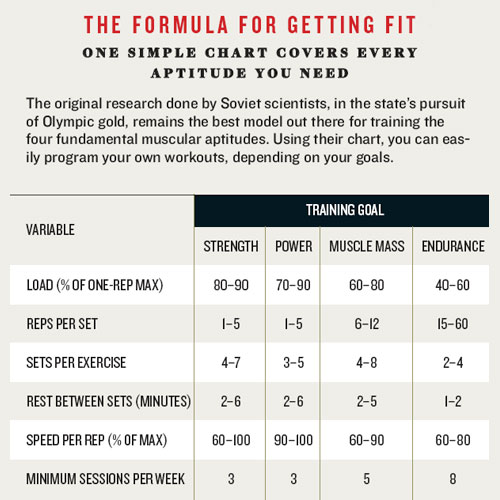 But what would you do if your final goal was two of them? Say you wanted to get a lot of strength as well as endurance for example. How would you proceed?

Would you follow the graphs recommendations for one day or week on one goal and then the next week is for the other goal? Would you average out the variables? Would you spend several months on one and then the other?

What would you do?

So first what you need to know is that chart, while a good general guideline, isn't the complete picture. You can achieve the same hypertrophy for instance while never lifting under 90%, provided you equate volume. Similarly, you can become very strong while spending most of your time under 70%.

Second, to answer your question, all adaptations are not competing with each other and in fact some, like strength & hypertrophy, or strength & power, even tend to feed off each other where increased muscle mass will lead to a better strength potential, and a higher strength makes it easier to deploy that strength fast, developing more power. This is the essence of systems like Louie Simmons' version of the Conjugate System, popularized for powerlifting in Westside, where the lifters mix 3 types of training: repetition effort (hypertrophy oriented, long sets with low loads), dynamic effort (power oriented, several short sets with light loads and bands), and maximal effort (strength oriented, several short sets with maximal/circamaximal loads).

Other adaptations like strength & endurance are a bit trickier to mix, because they don't tend to be very synergetic (although additional strength can help with endurance, by making the load feel lighter, and additional endurance can help with strength, by allowing you to train longer and more often). In that case the main approach to this kind of hybrid training, advised by some excellent athletes like Alex Viada (one of the rare persons who can brag about a 600+lbs deadlift and several marathons & triathlons under his belt) is to consolidate your stressors. Meaning you should train one quality at a time: this can be done at the weekly level (high rep low load and endurance stuff on Monday, low rep high load and high intensity stuff on Friday) or at the training block level (in a block periodization fashion, where you would focus on endurance and do minimal strength training focused on maintenance for several weeks, then switch around, leading up to a peaking block and a competition).

Not the answer you're looking for? Browse other questions tagged training goals or ask your own question.

6
Do people who lift weights twice per week need less protein than people who lift three times per week?
8
How to train for triathlons during business travel
19
Can I be serious about getting into great shape if I have an office job?
4
Types of endurance and ways of training them
2
How to train general stamina (e.g. 12 minutes running)
2
How can I train legs when I have hip dysplasia?
5
How often and how long should yoga be practiced for optimal health benefit?
1
Stick with progressing rep ranges or switch to small weight increments?
2
Can you train yourself to respond well to training?
2
When do repetitions stop being heavy?