Is it possible to recruit all the motor units available?

If I have exactly 2lbs of muscle on my bicep and I do a weight lifting exercise that involves only the bicep, is there a limit of how much weight I can lift for 1 rep if the muscle mass remains exactly the same between workouts.

In other words, is it possible to recruit all the motor units (or all the muscle) for a given muscle mass? If so, I would need more muscle to lift heavier, if not, I should still be able to lift heavier with the same 2 lbs of muscle.

This is sort of a complicated question from a physiological point of view.

Muscle is made of myocytes (muscle cells), which are made of a few things of interest in relation to your question.

Let's look at a diagram: 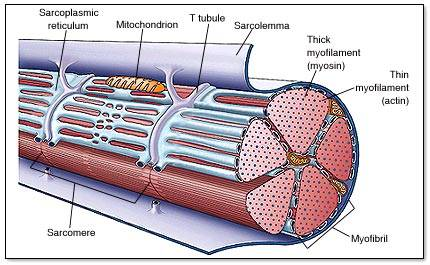 The myofibril (called out above) are the packs of fibers in the muscle, which are responsible for contraction of the tissue. They're composed of many sarcomeres linked together. Sarcomeres are sort of like -- for lack of a better analogy -- stacks of velcro that can pull themselves together. Thousands of little motor proteins called myosin are attached together and run along filaments inside these sarcomeres, each one acting sort of like this: http://fitr.to/myosin.

Below is the classic diagram of a sarcomere. Don't get too caught up in the terminology here, but you can see the myosin heads are all married together and skip along the actin filaments, contracting the sarcomere, and thus contracting the myofibril: 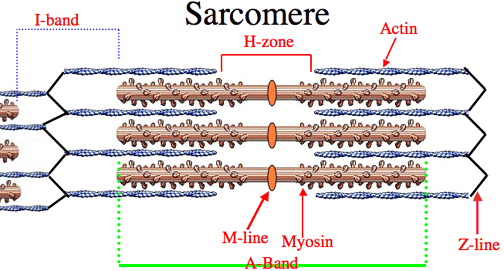 Their movement is mediated by cleaving ATP, which is manufactured by the sarcoplasmic reticulum.

Now that we understand that process, let's take a look at myocytes themselves, so we can understand the pathway that generates muscle contraction. Here's what a myocyte looks like: 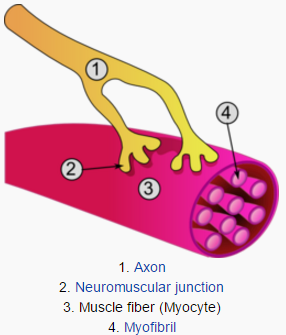 The whole pathway, greatly simplified, is:

When you attempt to weight train, your feedback mechanisms (tactile, visual, and proprioceptive) may detect that nothing is happening, which maybe means you'll further invigorate the muscle with a stronger signal and more ATP is generated, more myosin are recruited, and more tension is generated.

Well, depending on how you train, the myocytes may develop to be more densely composed of myofibril, or they may develop with a beefier sarcoplasmic reticulum (which is the part of the cell that generates ATP), or some where in the middle.

If myofibril development is favored, much higher tension can be achieved in the muscle cell, because there is more fiber and more myosin to run along it. This would be desirable if one were training for a higher 1RM.

On the other hand, if sarcoplasmic reticulum is favored in cellular development, the muscle would have fewer fibers, but under anaerobic conditions it could endure longer. This means there would be more strength endurance -- perhaps in this case it would be desirable if one were training for a 6, 8, or 12 RM (or some variation of that time under tension).

So to answer your question, how the muscle is trained will determine the myofibril and sarcoplasmic development of the muscle, and ultimately the effectiveness of a muscle under certain stimuli. If the muscle group is forced to remain at a certain weight, the type of training done will dictate how good it becomes at an action, and thus the density of their respective cellular structure. As diet permits, minor anabolic and catabolic metabolism will allow this transformation to occur as the result of training.

Take olympic weightlifters for example: they maintain a certain weight class and train in 1RM modalities. They develop extraordinary myofibril muscle. On the other end of the spectrum are bodybuilders, who train for effective sarcoplasmic reticulum in their muscle. The appearance of the muscle is different, as is the density. An elite 180 lb bodybuilder would look quite different than an elite 180 lb olympic weightlifter of equal height.

These are two "end-of-chain" variables, yet there may be others in the pathway that need consideration, such as how good the neurons become at signaling the cells for contraction, or how well the brain is trained to recruit the muscle. Part of weight training is reducing the number of feedback loop iterations that sort of "nickel and dime" that pathway. For example, in the space of milliseconds, the system may behave like so: am I applying enough effort? no I am not -- must apply more effort. how about now? not yet, more effort. You could see how this and other neuromuscular scenarios may deplete anaerobic resources and reduce effectiveness.

Not the answer you're looking for? Browse other questions tagged strength strength-training strength-gain or ask your own question.

63
What are the trade-offs of weight versus repetition?

8
Is it effective to do 2 sets for size and 2 sets for strength?
3
does being able to lift more weight mean more strength?
6
What are you views on progress between rep range vs. fixed reps?
3
Does muscle strength (rather than muscle mass) also depend on food consumption?
1
How much stronger can you get as you get fatter?
3
Got in shape, lost fat & gained muscle, but I'm weaker now. Why?
2
Is it possible to increase muscle weight (maybe muscle density) without increasing muscle size. Or at least minimize muscle size increase
6
Does “Greasing the groove” work and if so why?
2
Scientifically speaking, how are strength and endurance not the same thing?
9
Do the effects of Morning Neuromuscular Deficit make morning training inferior to afternoon training?