What is the best crawl that helps to broaden your shoulders?

Is is possible to tell that theres a crawl, according to the specific movements, better than the others for this aim?

I have broken down the main strokes into their activated muscle groups. Note, you will have to do a lot (and I mean a lot) of swimming to see a big increase in your shoulders. It would be more efficient to follow a bodybuilding/powerlifting programme.

Breaststroke - Pectoral and Latissimus dorsi muscles are used to sweep the arms inwards against the water. - Glutes and Quadriceps muscles power the breaststroke kick. 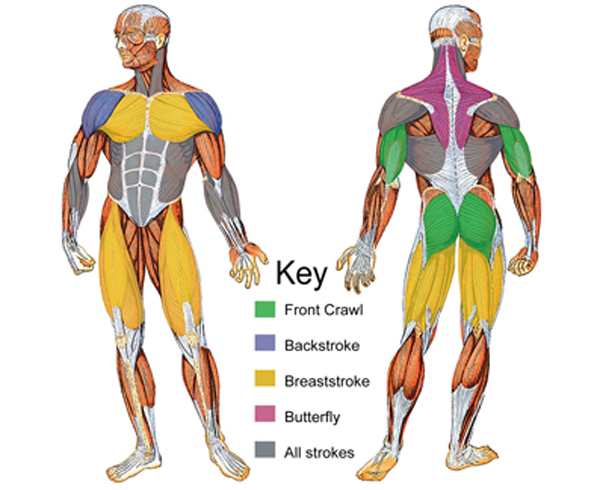 The shoulder muscles that contribue to the broad shape are primarily the deltoid muscles. This is the muscle that forms the bulk of the shoulder muscle mass, with three heads (Anterior, medial and posterior) that inserts on the humerus.

This muscle is primarily involved with shoulder abduction, or moving the upper arm out away from the body. So for swimming, all the traditional racing strokes (front/Australian crawl, backstroke, breaststroke and butterfy) will work the shoulders.

There are some differences, and things to consider however.

As JJosaur points out, however, while swimming will give you fairly defined shoulders, it's not going to layer slabs of muscle over the shoulder area. Part of the reason that swimmers appear to have such huge shoulders is because of the large lats and extreme taper into the waist. Additionally, given the emphasis on the front/middle delts, many swimmers appear to be slump shouldered because the front portion of the muscle overpowers the rear and pulls the shoulders forward. If you do a lot of swimming, you should supplement with dry land training as well.

Not the answer you're looking for? Browse other questions tagged muscle muscle-mass swimming shoulders or ask your own question.

4
How to compensate swimming overload in the gym?
1
Can swimming significantly help to improve vertical jump?
2
Is Upright Row a good alternative to Overhead Press for people with rounded shoulders?
3
Increase range of movement in Shoulders
3
slouched shoulders get better when i open my hands
1
How should the shoulder blades move when swimming breast stroke?
2
What's the most efficient way to walk and swim?
4
Calf cramp by swimming
2
What are the risks and chances of hanging with loose shoulders?