What are the best ways to deal with headphone cords while exercising?

I'm looking to buy a new set of headphones; I don't care much about audio quality, so I use the same pair of headphones for running and normal use, and prefer the kind of earbuds that slip over the ear (even for normal use).

In considering which kind of headphones to buy this time around, I realized that, although I don't mind headphone cords in normal usage, I find them extremely frustrating during running and weight-lifting. So, while browsing Amazon's headphones section, I thought there would be at least some overlap between the Sports & Exercise and Wireless feature categories; turns out there isn't. After doing some digging, there do seem to be bulky wireless headphones marketed for exercise, but most of their reviews make such headphones seem pretty terrible.

Since getting rid of the cords doesn't seem feasible at this point, what are the best ways to deal with headphone cords while exercising?

I'm a long time jogger and just hated corded headphones, plus having to constantly replace them because the cable would wear near the plug.

All the reviews of wireless headphones were less than convincing, as you've seen.

I did however take the plunge and bought a Motorola S9. I returned it immediately because it was counterfeit. Then I got a real one. 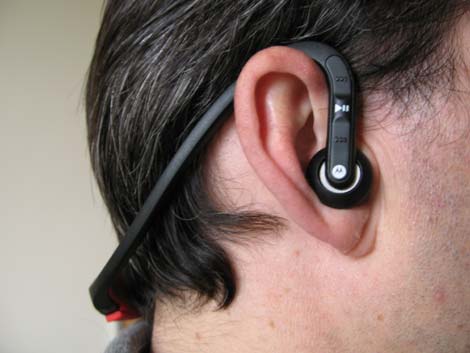 As far as stability and comfort, I couldn't fault it, but maybe I just had the right shaped head. The problem was losing reception when jogging near a interference source, like overhead wires. Nonetheless, I it rarely affected me where I jogged so the only time I'd go back to wired headphones was when I'd forgot to charge the Motorolas. The Motorolas completely eliminated that enormous frustration I had with wires and buds falling out.

Caveat: I only listen to audiobooks, not music, so can't comment on their sound reproduction.

Just recently I bought a friend some Plantronics Backbeat GOs, telling her to give me them back if she didn't like them, knowing wireless is really a hit and miss affair. 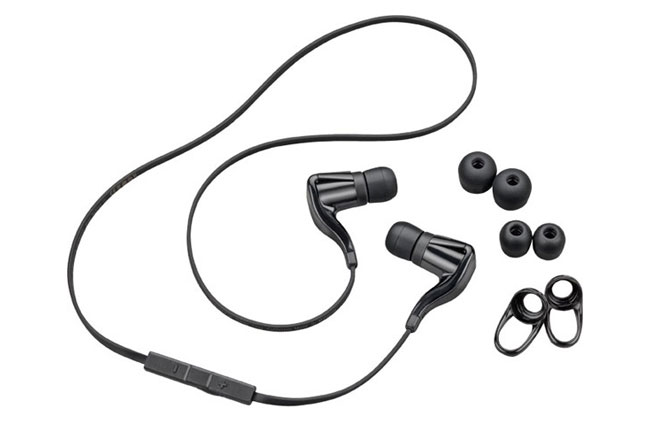 She gave them back.

I don't use the Plantronics GOs for jogging, they simply are not secure enough to handle the bouncing. Another massive design fault of them is the rubber connecting cord between the buds--high friction rubber catches on the back of your neck when turning your head and can pull the buds out. That could have been so easily eliminated with smooth plastic. Sometimes I wonder if any companies actually use their products. Having the cord across the front instead of the back helps this a lot, but now gets in the way of activities more.

These two devices together would make the perfect device. Maybe the later version of the Motorola, the S10, is much better, but the reviews still seem poor.

A problem with headphones is, because of hygiene, I never found a place that would let me return them if they were no good. One may have better luck in the States, but you may have to just take the gamble, try them, because it seems like people either love them or hate them. Wireless headphones have a long way to come, but are definitely feasible at the moment.

Mine is the simple earphones, the ones which you put inside the ear hole. My problem with that was during running the earphones are falling off my ears.

So what i came up with is to have the cord tied around my each ear haha, and now it doesn't fall off! It might look weird/odd though but it suits me as I have hair covering it anyways. It does save me from buying new ones or even buying a headset which definitely will not fall off. I also put the cord inside my shirt to prevent it from swaying back and forth on a run.

I had a a similar problem. I have a terrible time keeping earbuds in my ear while running/exercising. I tried using an attachment on the earbuds that come with iPods, which allow you to hook them on your ears, but the perspiration would make one or the other stop working before my run ended. I now use the Sennheiser MX85 Sport Series II Twist to Fit Earbuds. They have a design that stays in your ear and they are immune (at least for me) from the perspiration. They also come with a clip for your collar that helps keep the cord from getting in the way. I have used them on fairly long runs (12-15 miles) without hurting my ears and in the gym.

I've got a pair of these Philips ActionFit Sports earhook headphones.

They're in-ear, they go over-ear and are adjustable for snug fit, and they're washable. I've had them about a year and they've been great.

I run with a waist pouch. I have the pouch behind me, and I run the headphone cables down the back of my neck, under my shirt and into the pouch. It works really well, I'm never bothered by my headphones.

Dont get wireless head phones. Just get some head phones that have a plastic part that hooks around your ear. Then the cords can be heavy and even flop around or get pulled on while being under your shirt without falling off. These dont need to be expensive, so check out Marshalls or TJ Max.

Not the answer you're looking for? Browse other questions tagged exercise running weightlifting or ask your own question.