Most articles nowadays seem to favor High Intensity Interval Training (HIIT) compared to Steady State Cardio (SS), for various reasons like faster fat loss and getting higher levels of cardio fitness in the same time period. Not only that, but exercise retention among individuals has been much better due to shorter durations of HIIT workouts, which is a good thing.

There are even articles which claim that HIIT might improve aerobic capacity and quality of life in people with heart diseases (compared to steady aerobic cardio). Articles which warn against excessive endurance excercise (Potential Adverse Cardiovascular Effects From Excessive Endurance Exercise, Exercise training reduces resting heart rate via downregulation of HCN4) mostly deal with marathon runners and cyclists - although it's not clear whether it's the endurance part that should be emphasized.

On the other hand, some articles note that there is a difference in heart adaptation between HIIT and SS cardio: on one hand there is a Concentric Hypertrophy of the Heart in HIIT (due to anaerobic stresses), vs the Eccentric Hypertrophy of the Heart for SS, which increases the stretch reflex (less energy used per beat). According to Wikipedia, concentric hypertrophy is the less appealing type of hypertrophy, because it increases wall thickness without increasing the chamber radius, which can "impair filling and lead to diastolic dysfunction".

(Update) Again, regarding endurance, there is an article which describes an "U-shape" distribution of mortality as a function of exercise pace, quantity, and frequency, i.e. a potentially reduced benefits of endurance cardio if taken too far:

Jogging up to 2.5 h per week at a slow or average pace and a frequency of ≤3 times per week was associated with the lowest mortality. Those who jogged >4 h per week, at a fast pace, and >3 times per week appeared to lose many of the longevity benefits noted with less strenuous doses of jogging

In this study, the dose of running that was most favorable for reducing mortality was jogging 1 to 2.4 h per week, with no more than 3 running days per week, at a slow or average pace. 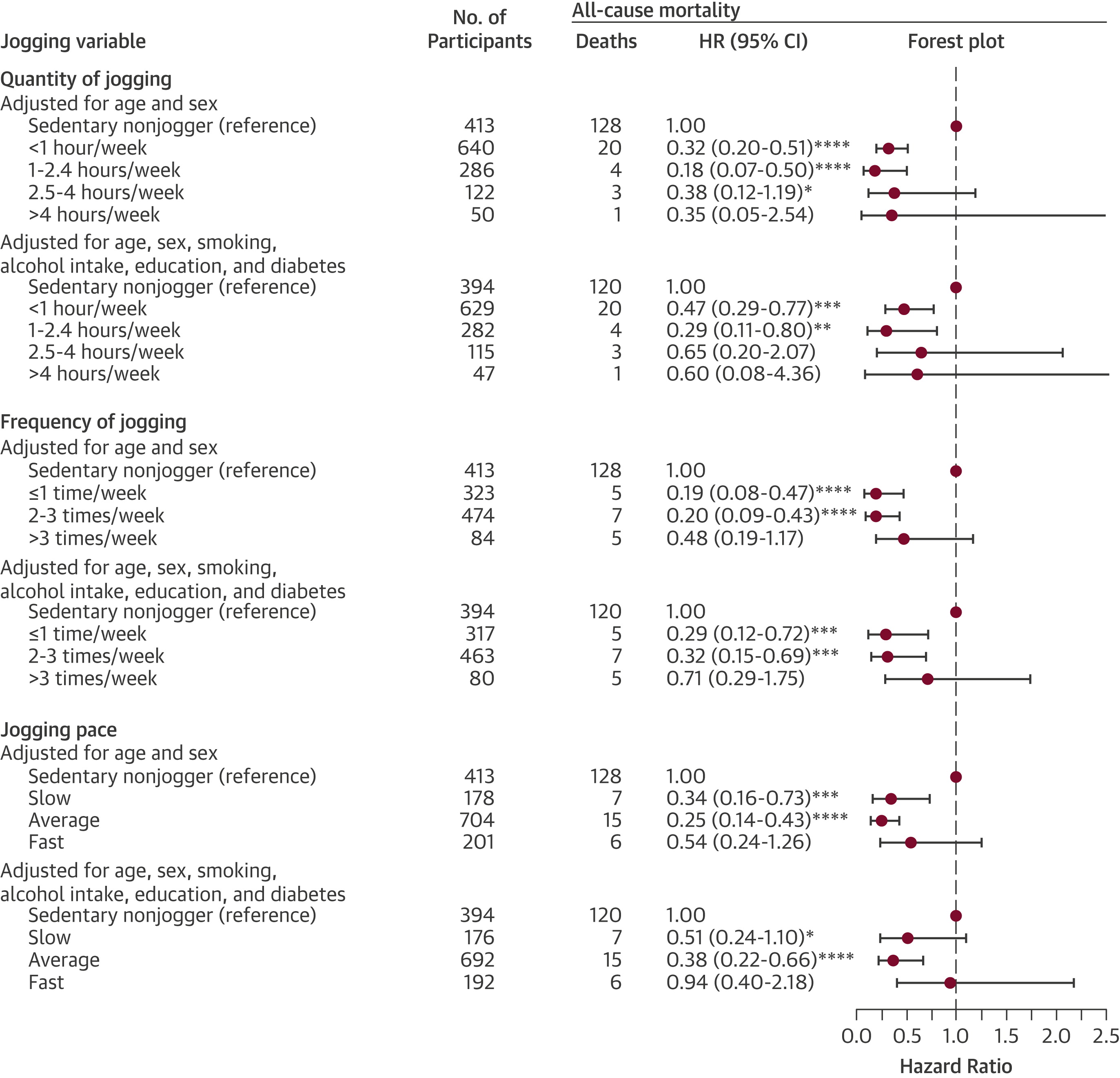 The jogging pace in the image above might be related to HIIT, for example.

So, while everyone agrees that regular exercise improves cardiovascular fitness, lowers resting heart rate and increases longevity on average, it still appears that hypertrophy effects of HIIT might be more problematic in the long term?

I wouldnt take in account the last longitudinal study by default, due to study design.

On top of that HIIT is just a tag. Every dynamic exercise with a high enough intesity will provoke hypetrophy of the hearth wall.

Soccer players have this type of "problem" too. Even in static exercise sports such as weightlifting and bodybuilding there is the same effect on the hearth.

Anything brought to the extreme will give you "side effects".

Not the answer you're looking for? Browse other questions tagged cardio health-risk hiit heart or ask your own question.

4
How best to address a strength/cardio imbalance?
8
Recommended amount of cardio exercise
3
Should I stay away from racing long distances if my main concern is health?
2
Does weighlifting have the same benefits as HIIT?
4
Steady state interval vs high intensity interval for running endurance
6
Is HIIT healthy practiced long term?
0
HIIT / HIT training with Heart Rate Monitor
11
Is low intensity cardio the only way to induce an increase in stroke volume?
2
Best way to determine aerobic pace for running
2
If I'm training only for 5k, can I do mostly VO2 max training workouts?