What's the purpose of this adjustment on the rower?

My club has a rower. It has an adjustment on the side that looks like this: 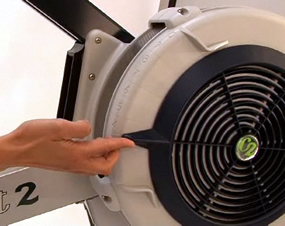 I see other people using the rower with the adjustment set up high (7-10). I asked the trainer and he said, that sets the resistance for the machine, so, I should set it high to get a good workout. I wanted a good workout, so, I followed his advice. It was hard for me to use the machine because it felt heavy when I pulled on the handle. Was the trainer correct? Do I have to set it to a high number for a good workout?

No. What the trainer told you is one of the many common misconceptions surrounding the use of the ergometer. That adjustment, known as a damper, does not set the resistance for the machine. If you take a close look at the damper while you move it, you'll see that when you set it to a low number, the opening on the damper gets smaller. And, when you set it to a higher number, the opening increases. The damper actually controls the flow of air into the flywheel cage. The higher the number, the faster the flywheel will slow down after each stroke. That means it will take more work to spin the flywheel on the next stroke. The opposite is true for lower numbers.

“Damper Setting is Not…

Many people confuse damper setting with intensity level or resistance. Instead, the intensity of your workout is controlled by how much you use your legs, back and arms to move the handle—in other words, how hard you pull. This is true regardless of where the damper lever is set: the harder you pull, the more resistance you will feel. Because our indoor rowers use wind resistance (which is generated by the spinning flywheel), the faster you get the wheel spinning, the more resistance there will be. Think about rowing on the water. Regardless of whether you are rowing in a sleek racing shell, or in a big, slow row boat, you will need to increase your intensity and apply more force to make either boat go faster. The difference is in how it feels to make the different boats go fast. Making a sleek boat go fast requires you to apply your force more quickly. Making the slow boat go fast also requires more force, but the speed at which you apply the force will be slower over the course of the rowing stroke. At a damper setting of 1–4, the indoor rower feels like a sleek racing shell; at the higher numbers, the indoor rower feels like a slow row boat. Regardless of the setting, you will need to increase your effort to increase your intensity.”

And, from Debunking the Myths: Damper Setting, Stroke Rate and Intensity,

“Myth: A damper setting of 10 will give you the best workout.

Reality: A damper setting of 3–5 is likely to give you the best workout. Too often, we see indoor rowers set at 10, because the athlete thinks that a higher number must be more challenging (or will reward them with a better time). The real challenge is to accelerate the flywheel at a lower damper setting, where power must be applied such as in a sleek, fast, rowing shell. A damper setting of 10 is more like a slow heavy rowboat—still a workout, but more about strength than cardiovascular fitness. Keep in mind: the best rowers in the world who compete at the Olympics, do not row competitively at a 10! Emulate them; aim for 3 to 5”

So, to answer your question, if you are a beginner on the rower, I would set the damper to the recommended low setting of 3-5. If after a while, you need a challenge, experiment with a higher setting. But, I would not recommend going too high with the setting as this typically leads to bad form and a potential for injury.

Not the answer you're looking for? Browse other questions tagged resistance rowing-machine or ask your own question.

16
Is increasing resistance the only possibility to build more muscle mass?
4
Implications of the fact that resistance bands doesn't provide constant force for pull throughs and in general
2
Good resistance bands for the office?
8
Resistance bands: What do the resistance ranges of "X to Y" pounds mean?
1
How do I use the rowing machine for a more effective workout?
4
Are cardio exercises that involve sitting prone to any of the same risks of prolonged stationary sitting?
0
Are all resistance bands the same?
1
Maintaining and conditioning the seat rail of a Concept2 model D rowing machine
2
What exactly is Metabolic Resistance Training? How effective is it?