Does eating meat causes weight gain, even in deficit [closed]

Ask Question
Asked 5 years, 3 months ago
Modified 5 years, 2 months ago
Viewed 520 times
0
Closed. This question is off-topic. It is not currently accepting answers.

Questions on nutrition are off-topic unless they relate directly to exercise.

I was told recently that eating meat will cause weight gain. I fail to find any research on this and i call bs, but i am very curious about it. If yes, what would be the amounts (for chicken/fish). Any linked research would be welcome as well.

Note: This explanation does not concern itself with body health, wellbeing, the ability to follow/sustain the diet short/long term, impact to nervous system or the psychological impact of satiety that meat-centric diets can offer. It only concerns itself with the imaginary scenario of two identical subjects following the same total calorie diet but with macro-nutritional differences.

Does eating meat cause weight gain?

The question asks if eating meat (henceforth referred to as protein) lead to more fatty mass gain than the other macronutrients: fat and carbohydrates (and alchohol), if consumed at the same calorie level.

To put it another way: For weight change, does the macro-nutritional profile of a diet affect the rate and total amount of fat mass gained?

The common tautology employed by people proving that macro-nutritional profile is not important when it comes to weight loss is "a calorie is a calorie".

Evidence For, or "A calorie is a calorie"

Several metabolic ward studies have shown that there is no difference in weight loss when protein intake was held constant. If you're really looking for a metabolic advantage through manipulating macronutrient, you'd be far better off putting your money on protein. There's actually some evidence that higher intake levels do convey a small metabolic advantage.

Unsurprisingly, the studies into macronutrient impact on mass change are numerous but by no means perfect. One has to cast a very critical eye over all the conflicting evidence (and mud-slinging) and make their own decision.

A good meta analysis of the above tautology by the well-respected Buchholz AC & Schoeller DA. concluded that:

This referenced a ward study (amongst others which also concluded the same):

To continue the evidence-train for there being no win in carbs-vs-fat:

In a 2003 study by Bravata DM, et al. the conclusion was that nutritional-profile really doesn't affect total weight change at a significant level.

A 2009 study directly comparing the weight loss "fad" diets concluded that provided you reduce calories, the method you do this is not of importance:

Reduced-calorie diets result in clinically meaningful weight loss regardless of which macronutrients they emphasize.

The results of this study showed that it was energy intake, not nutrient composition, that determined weight loss in response to low-energy diets over a short time period.

An Australian study put them head-to-head over 12 months and didn't find a large difference:

Under planned isoenergetic conditions, as expected, both dietary patterns resulted in similar weight loss and changes in body composition. The LC [low carbohydrate] diet may offer clinical benefits to obese persons with insulin resistance. However, the increase in LDL cholesterol with the LC diet suggests that this measure should be monitored.

A 2010 study went a step further and did a 2-year study across over 300 participants; patients lost an average of 7 kg or 7% of body weight, and no differences between the 2 groups were found:

Successful weight loss can be achieved with either a low-fat or low-carbohydrate diet when coupled with behavioural treatment. 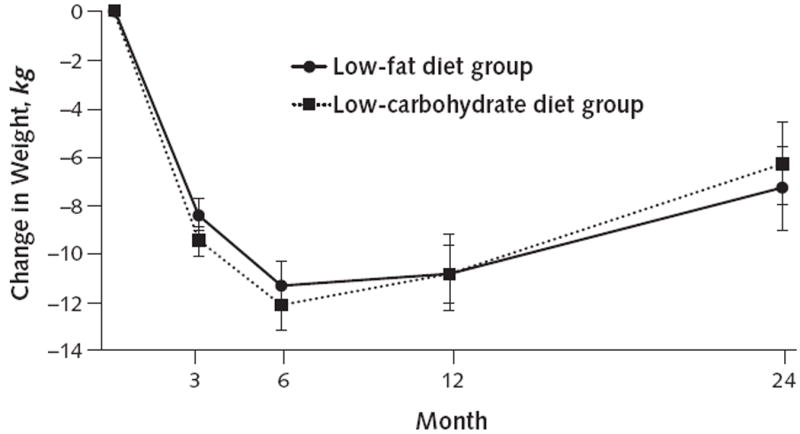 Taking a different view and looking at weight gain, there are fewer studies but the evidence points to the same outcome.

There was no significant difference in fat balance during controlled overfeeding with fat, fructose, glucose, or sucrose.

This can be also seen in this small 2000 study:

...fat storage during overfeeding of isoenergetic amounts of diets rich in carbohydrate or in fat was not significantly different, and carbohydrates seemed to be converted to fat by both hepatic and extrahepatic lipogenesis

A important point to note is that dietary fat is what is stored as bodily fat, when a caloric excess is consumed. For dietary carbohydrate to be stored as fat then they must undergo a conversion through 'de novo lipogenesis' which will occur when the carbohydrate portion of someone's diet alone must approach or exceed ones total daily energy expenditure (TDEE). You can read more here

In addition, for a comprehensive primer on insulin and how it functions please check out this post on weightology which is summarised in layman on reddit by /u/ryeguy, here.

Evidence Against, or "A calorie is not just a calorie"

I cannot find evidence to support the opposite viewpoint. However there is criticism of the studies done these are found in the "Dear Sir"'s in the ASfCN/

A post by Anssi H Manninen is critical of a Bravata study:

...In the true low-carbohydrate group, the mean weight loss in trials was 17 kg, whereas in the higher-carbohydrate group it was only 2 kg. Oddly, the authors did not consider this significant. Only by intermingling the results of trials of low- to medium- and high-carbohydrate diets could the authors have reached the misleading conclusion quoted above.

In another article Richard Feinman and Eugene Fine dispute the assertation of "a calorie is a calorie" using the first law of thermodynamics by stating that the second law must also be taken into account.

What should I eat for weight loss?

Eat less. Different diets can make this easier, so pick whichever one best fits your lifestyle. Ultimately, you need to reduce your caloric intake.

Many diets, fad or not, do work. This is mainly because they reduce calories.

Weight gain and loss are controlled by hormones. Eating more does not cause children to grow, the fact that children are growing causes them to eat more. You can stunt the growth be restricting the food of a growing child, but first the body will try to compensate by lowering metabolism, causing the child to feel tired and move less, and increase their hunger, making the child want to eat more.

Adults are still affected by hormones. In particular, insulin tells the body to store fat. Most people understand that if you eat a lot of carbohydrates, blood sugar will go up, which stimulates insulin, which leads to fat storage (and more hunger). If you eat carbohydrate and try to restrict calories, the body will respond by making you hungry and depressing your metabolism.

Animal protein stimulates insulin directly without increasing blood sugar. This can potentially cause you to store fat even when you are trying (and failing because your body is preventing you from doing so) to be in a calorie deficit. This is probably what people were talking about with meat causing weight gain. For most people without metabolic problems, protein is satiating and does not stimulate insulin enough to be a problem.

However, for someone who is obese and has insulin resistance, eating too much protein can stimulate enough insulin to prevent weight loss or even cause weight gain. That is where the low carb, high fat (LCHF) diet comes in. It lowers carb, obviously, but also keeps protein at a low level. There is more that happens with ketosis, but that's out of scope here.

While it may be true strictly speaking that the weight you gain or lose is calories in minus calories out, your body regulates both input and output in ways you just don't have mental control over, and which is very affected by the foods you eat. If a calorie is a calorie, then eating ice cream is the same as eating broccoli is the same as eating tire rubber. We all know intuitively that is not the case, and your body does too. Trying to defeat your body's hormonal system with self-control is a losing proposition for most people. It makes much more sense to understand that what you eat (and when) can effect your hormones in ways that can make your goals easier or harder to achieve.

Not the answer you're looking for? Browse other questions tagged weight-loss body-fat meat or ask your own question.

4
I need help with confidence because i have worked out hard for over a month and a half and still no weight loss on scale?

1
Is my calorie restriction diet having an adverse effect on my weight loss?
3
Eating less, working out more, but gaining weight?
4
Is it physically possible to have a calorie deficit for a month and gain 5 kilos of weight while being on diet and training?
2
Why am I losing more weight cycling than running?
1
Experienced runners: How to lose fat during a training cycle
1
Don't see much difference in size
2
Is it possible to gain weight while exercising?