Why is a lateral pull-down machine easier than pull-ups?

Today at the gym after only being able to do about 3 pull-ups in a row, I decided to try the the lateral pull-down machine (this one has separate hand grips, not a single bar). After messing with different weights, I set it to about 10 lbs more than I weigh and found I could do 6 in a row.

I tried to keep my hands/arms in the same positions/motions that I have on the actual pull-up bar so I don't know why it was easier. I also didn't feel the same muscle strain as I do with the pull-up bar. Is there something I am missing or not understanding wrong?

The machine I used was similar to this: 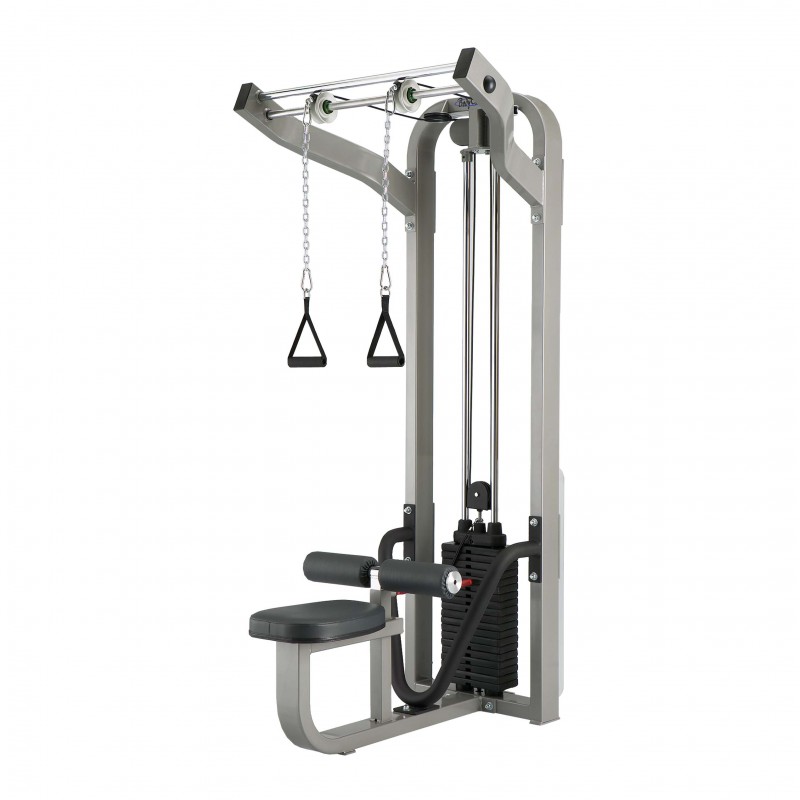 First of all, both have different range of motion, you don't do the lateral pull-downs the way you do pull-ups, but let's not go into detail of that, and focus on the main physics.

You find it easier to do lat pull-down, that's because of the pulleys. Below diagram gives and illustration of how pulleys work. 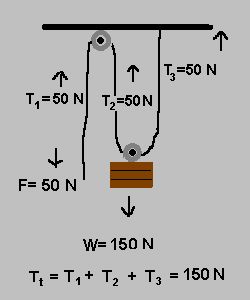 Same principle with some variation is applied to the pull-down machines. When you stack up the machine with your body weight equivalent weight, you are not really lifting your body weight, but a part of it. What's that percentage, it depends on how the pull-down machine is configured with pulleys. Nonetheless, the effort to lift will be lesser compared to pure pull-ups.

That's awfully interesting. This is the first I've heard of someone lifting more than their bodyweight on the machine and only doing that many pull ups.

The only answer I have for you is to really focus on your posture. When you do a pull up, your back is slightly arched so that the bar touches your chest at the top of your rep and you get a nice squeeze in the upper back. On the pull down machine, a lot of people cheat to pull more weight and end up pulling with their entire body and their back see-saws throughout the workout. When you workout on the machine, keep your back almost straight and your chest slightly puffed out (which will end up giving you a slight arch in your upper back). Keeping the entire upper body still, pull handles down to chest level.

Also, maybe look for a lat pull-down machine that has a bar instead of those two handles. Machines with those handles put a lot of focus on control so that you don't end up wobbling all over the place. That might be why you weren't getting the same muscle activation. Good luck!

Pulleys do not inherently make a lift easier. They can make a lift easier, or they can simply be employed to change the direction of the load—such is the case with the lateral pull-down machine in the image, above.

(The machine in the image, in fact, has numerous pulleys, all but one of which change the direction of the load. The pulley at the bottom, just above the weight stack, functions to moderate force imbalances between the two arms.)

The weight of the stack is pulling downwards under gravity, but we want to be able to pull downwards against that weight, thus simulating a pull-up. That cannot work. So a cable is run over two pulleys—one above the weight stack and one above the lifter—to change the direction of the load. In an ideal (theoretical) machine, those forces would be identical. That is, if the weight on the stack were 490 Newtons (≡ 50 kilograms/110 lbs), so too would be the minimum force required to move that stack.

In the real world, however, friction resists movement in both directions. The stack is harder to lift, but easier to put down. This phenomenon may offer part of the explanation for its being easier than a pull-up: although the concentric phase of the lift requires slightly greater force, the eccentric phase, which fatigues us more, requires a slightly lesser one. However, the effect of friction is generally only appreciable on low-quality non-commercial machines; the friction on well-serviced, high-quality commercial machines is negligible.

There is most likely something else at play here.

The most likely reason is inaccuracies in the loads indicated on the stack. Loads are commonly exaggerated, even on machines of commercial quality. Indeed, whether by design or due to poor manufacturing tolerances, this is the standard. We should therefore accept the loads indicated with caution, and generally assume that they are only meaningful or trustworthy in relative terms—that is, compared with each other.

We can test the load simply by pinning the equivalent of our body weight to the stack, then hanging from the bar/handles. If the load indicated is precise, we will be supported in mid-air, perfectly counterbalanced by the weight stack.

Finally, as mentioned above, pulleys can be employed to reduce the effort relative to the load by some factor known as mechanical advantage. The benefits of this is twofold: the load can be graduated using the same weight plates, and importantly, twice the length of cable can be pulled without increasing the size of the machine. Cable pulley machines such as tricep push-down, functional trainers, and cable cross-overs are designed this way. But the lateral pull-down is generally not. (If your specific pull-down is designed this way, the stack will be lifted half the distance that the cable is pulled down.)

I hope that answers your question.

Not the answer you're looking for? Browse other questions tagged pull-ups or ask your own question.

4
On machines, what is the weight listed?

2
Pull-ups: Pain on shoulder joint when lowering body - how to recover from, and prevent or avoid?
5
Assisted PullUp Machine or Inverted Row?
2
2-day split with weak grip: vertical/horizontal or push/pull?
1
Why I can't do pull ups/chin ups properly however I am lifting heavy weight and also doing lots of push ups
2
Can't do pullups; should I buy a lat pull down machine?
6
Why didn't 5x5 work for my pullups?
4
Why are chin-ups harder than pull-ups?