Coingestion of carbohydrate and protein before/during/after a weightlifting session: how much carbohydrate?

It has been established that the ingestion of carbohydrate and protein before (13,14) and/or after exercise (5,10,11,13–15) inhibits protein breakdown and stimulates muscle protein synthesis, resulting in net muscle protein accretion during recovery. 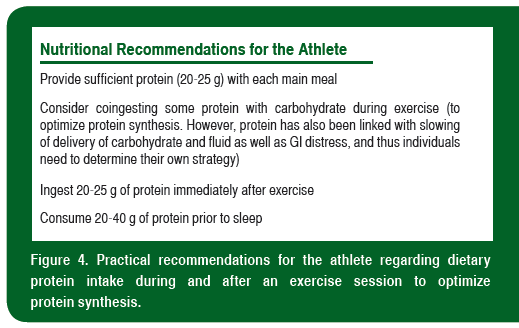 I know that the protein intake should be around 25g immediately after exercise. How much carbohydrate am I supposed to eat before/during/after a weightlifting session when coingested with proteins to optimize muscle protein synthesis and recovery?

I am aware of the Stack Exchange question Eating enough carbohydrates to build muscle but it doesn't focus on the coingestion of carbohydrate and protein.

From the last paragraph of {1}:

Even more so than with protein, carbohydrate dosage and timing relative to resistance training is a gray area lacking cohesive data to form concrete recommendations. It is tempting to recommend pre- and postexercise carbohydrate doses that at least match or exceed the amounts of protein consumed in these meals. However, carbohydrate availability during and after exercise is of greater concern for endurance as opposed to strength or hypertrophy goals. Furthermore, the importance of co-ingesting post-exercise protein and carbohydrate has recently been challenged by studies examining the early recovery period, particularly when sufficient protein is provided. Koopman et al [52] found that after full-body resistance training, adding carbohydrate (0.15, or 0.6 g/kg/hr) to amply dosed casein hydrolysate (0.3 g/ kg/hr) did not increase whole body protein balance during a 6-hour post-exercise recovery period compared to the protein-only treatment. Subsequently, Staples et al [53] reported that after lower-body resistance exercise (leg extensions), the increase in post-exercise muscle protein balance from ingesting 25 g whey isolate was not improved by an additional 50 g maltodextrin during a 3- hour recovery period. For the goal of maximizing rates of muscle gain, these findings support the broader objective of meeting total daily carbohydrate need instead of specifically timing its constituent doses. Collectively, these data indicate an increased potential for dietary flexibility while maintaining the pursuit of optimal timing.

Not the answer you're looking for? Browse other questions tagged weightlifting nutrition protein or ask your own question.

34
Protein: How much is too much?
29
How much protein should I eat on off-days?
7
Why shouldn't you drink your protein shakes before or during a training session?
4
How much protein per muscle mass?
2
Window to utilize protein after weightlifting?
1
How long before a weightlifting session should I ingest proteins?
2
Minimum time between two servings of whey protein isolate?