How should one land when diving in Ultimate?

When diving/"laying out"/"bidding" in Ultimate, should you land on your chest or on your side?

This awesome set of progressions for learning to bid in Ultimate uses the WikiHow recommendation of landing on the chest. This seems strange for several reasons: our lady players might run into trouble with it, our more rotund recreational players might run into trouble with it, and landing on your chest knocks the wind out of you. Not to mention, landing on your chest with your arm(s) extended doesn't give you any option to roll that I can see.

This totally anecdotal account emphasizes landing on your side. This jives with everything I've learned about falling in grappling sports, as well as my personal experience in Ultimate: landing on your side allows you to roll, doesn't know the wind out of you, and gives you a hair more reach.

Chest-landing and side-landing are both obviously in use, but which one is best along the criteria of A) most effective and B) safest? Are there other tactical considerations I am missing? (Opinions from Ultimate players are valued, opinions from elite players are super-valued.)

Also, here is a video of the kind of layout I'm talking about:

Watch how Zip lands not directly on his chest, but on his hip, side and shoulder. It maximizes your contact with the ground, displacing the force of the impact over a greater surface area.

In response to michael's question about injuries from diving: I have seen collarbone injuries, heard of shoulder injuries, and seen people need to take the rest of a point off due to improper bids.

But data from the National Center for Biotechnology Information is better than anecdotes. P. Marfleet has this to say:

Laying-out (diving) is a skill that requires not only courage and determination, but also technique. A lay-out is usually performed at speed - a dive at the end of a run. The legs should be flung out straight keeping the knees together, while the arms are fully extended, reaching out to catch the disc (i.e. the whole body horizontal and parallel to the ground (Figure 7)). As the disc is caught, the whole body rolls in a twisting motion as it hits the ground. Thus impact is taken on the extensor surface of the forearm, posterior aspect of the upper arm and shoulder, lateral aspect of chest wall to posterior-lateral aspect of the buttock and thigh. The full force of the impact is thus dissipated. A poor lay-out usually finds one knee low and partly flexed and/or one or both elbows partly flexed. The player therefore lands directly on to the knee or elbow and sustains a friction burn or develops bursitis. Poor technique may also result in landing too violently on the hand, invariably landing directly on to the ulnar aspect, Figure 6. 'Skying' for a disc - ultimate is a non-contact sport but there is ample opportunity for accidental collision thus injuring the fifth metacarpal, phalanges, metacarpophalangeal and interphalangeal joints - instead of rolling on impact with the ground (Figure 8) 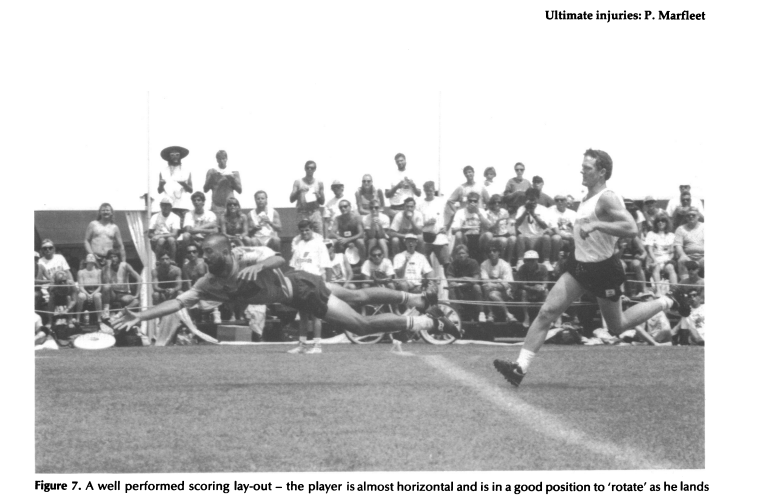 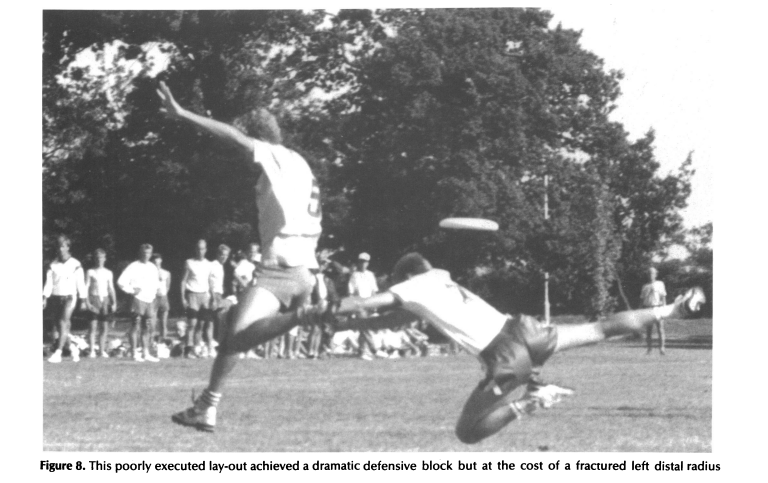 In contrast, Ultimate injury-prevention website injurytimeout.com recommends chest/abdomen landing, though technically one could interpret that to include both side and front landings. (Personally I think they mean chest not side.)

Layouts are a common way to get injured. You can minimize this risk by teaching proper layout technique and decision-making early in the season.

Start by teaching proper upper body and arm technique. The key is to land with most body weight on the chest and abdomen rather than the arms. The arm catching or D-ing the disc should be extended to prevent landing with a lot of body weight on the wrist, arm, or elbow. The other arm can be extended or bent in such a way that the athlete will not land with a lot of weight on it. To allow the disc to slide easily on the ground make sure players flip their wrist so that the disc is upside down. This prevents jamming injuries.

Ultimate frisbee also entails some unique maneuvers, such as a layout for the disc. This could account for a high rate of shoulder injuries. Though not specifically addressed in this study, it is of the author's personal experience and opinion that men tend to be more aggressive than women in this regard, which could account for the greater number of shoulder injuries in men. Proper technique for laying out has been described in the literature.

(Reynolds and Halsmer are referencing my above quote from Marfleet.) It seems to me that if that greater number of shoulder injuries is from more laying out, then they could be from either side or back landings.

Unfortunately I did not find definitive answers in my mini-literature review, but yes, injuries do occur from laying out, and proper technique can help prevent those injuries.

Your top competitive players are going to get the disk in any way they can and will risk injury to do it. If you aren't interested in pain, the dive should end in a slide more than a hard landing. If the disk is going to be at waist level, it's not time to dive yet. Diving to catch a disk should happen very near the ground, allowing the dive to be much more horizontal than vertical. I would think of diving onto a slip and slide.

For progressions, you can use one or both hands (chest or side). Get low to the ground by bending the knees, and place the ball or blade of your hand on the ground and start to slide. As you get lower, move to the forearm and finally to the chest or side. This can start from standing before moving to walking and running.

Not the answer you're looking for? Browse other questions tagged injury-prevention ultimate-frisbee or ask your own question.

12
How To: Avoid damaging my knee when training for and running a marathon
30
How to lose weight when morbidly obese
3
When\how to start to train on a campus board
5
How to avoid back pain when you are older?
5
When and how often should I train my core/abs?