Most efficient way to burn fat?

What is most efficient way to burn fat?

Not the fastest. I want to know how to target fat specifically if possible or just calories in general if not for the least effort output. Time spent exercising or the activity doesn't matter as much as long as total energy used is less (or maybe... perceived to be less).

I've read all about how HIIT will blast fat off - even after you are done working out, but that slow running will target fat specifically - and you can do that for a longer time.

1 hour of slow running generally seems easier to me than 20 minutes HIIT. At least psychologically. But is it really more efficient fat burn? You can (and should?) feel like death after a good HIIT session, and pretty fine after a pretty long run.

The math I tried:

In this case the easy jog is more efficient at fat burning than hiit.

Your "perception" of energy/effort used is strictly personal opinion. Taking the HIIT vs Jogging example. If both burns the same amount of calories, which is better? Whatever you like better is the answer. Why do people say HIIT is better for losing fat? Because of what you mentioned. It only takes 20 minutes compared to 60 minutes of jogging for the same result. In the end though, if you'd rather jog longer for less effort, that's what you should do. In the end, the only way to lose fat is a caloric deficit. How you reach that deficit, in the end, doesn't matter much (strictly in terms of losing fat).

Of course, if you simply starve yourself and eat nothing, you'll be at the maximum deficit, but you're not only going to lose fat. You'll lose muscle and suffer health issues. So to answer the primary question, the most efficient way to lose fat is to not eat. That comes with the possibility of death due to starvation, or severe health issues and malnutrition at least.

If you want to lose fat efficiently, while maintaining muscle and health, I would suggest aiming for a 750 calorie deficit per day while doing some weight training and supplementing with protein and BCAAs. BCAAs have been proven to help reduce the amount of muscle lost when cutting. For general diet, keep your protein high while keeping fat and carbs relatively low. When eating fats and carbs, try to get good fats (avacados, olives, olive oil, almonds) and good carbs (black beans, brown rice, oatmeal). With a 750 calorie daily deficit, you should burn about 1-2 pounds of fat per week.

You'll likely lose some muscle too, but that's what the weight training is for. You weight train to help you reach your caloric deficit, minimize muscle loss, and maximize fat loss. Doing cardio is ultimately not necessary for minimizing muscle loss, nor is it necessary to reduce your caloric deficit. But, If you feel like you're hungry and want to eat more, you can, for example, eat 600 more calories per day and jog at 5mph for 1 hour per day. 1 hour of 5mph jogging will burn about 600 calories (on average), so in the end, your deficit remains the same.

As your question states you're not concerned with how long your workout takes.

Steady state will burn the highest % of fat.

NOTE: As you keep saying efficient in your post. I'm not taking efficiency into account here, just workload and substrate utilization.

The graph shows exercise intensity related to the % of fat used as a fuel source. 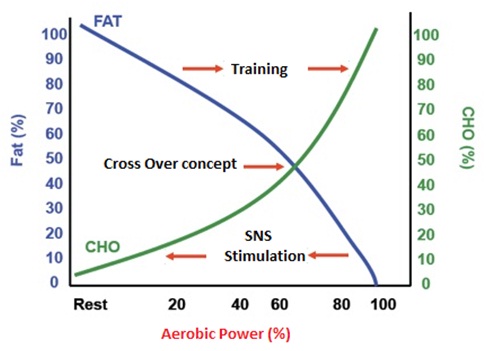 The point on the graph where the lines intersect is where you switch the primary substrate utilized (from carbs to fat or vice versa) - this corresponds roughly with the lactate threshold. This point is not fixed and can change with proper training as you become more conditioned the onset of this threshold is delayed (you can exercise harder longer).

It’s a misleading chart so it’s easy to draw the wrong conclusion. All the chart shows is the % of calories burned by “fat” based on intensity. To apply the chart to a workout plan, It’s key to understand the difference between relative and absolute intensity.

Here is an over simplistic way to think of it…

Person A at is burning more REALTIVE calories from fat (75%) However the ABSOULTE number of fat calories burned is only 75 calories out of the 100 total calories.

So you’re burning a higher % of your calories from fat at lower intensities, but you’re also burning less overall calories.

If we made this more realistic (and had person B do intervals – as they would need the recovery) they’d still be burring more ABSOLUTE calories and fat and therefore lose more weight (but tough to show this on a graph….)

Not the answer you're looking for? Browse other questions tagged exercise calories burn-fat or ask your own question.

0
Adding a 4th day, how to alter my current routine?

2
Which muscle training is most effective to burn fat on an untrained person?
2
What is the most efficient way to take in calories during a run?
4
How reliable is this study for the relationship between heart rate and calories burned?
6
How much harder is it to burn calories in hot weather?
6
Exercise bike / ergometer - calories burned, or calories produced?
1
Why did fitness apps seem to misrepresent calories burned between a bicycle ride and hike workout?