Name of gymnastics move (or variation)

I've been looking into gymnastics and calisthenics moves recently and came across this video of this guy doing some sort of front vertical one-handed lever?

I have never seen this anywhere else and I'm not sure what it's called or what type of training you would do for such a move.

You can see the video of what this guy is doing or have a look at the screenshot below. 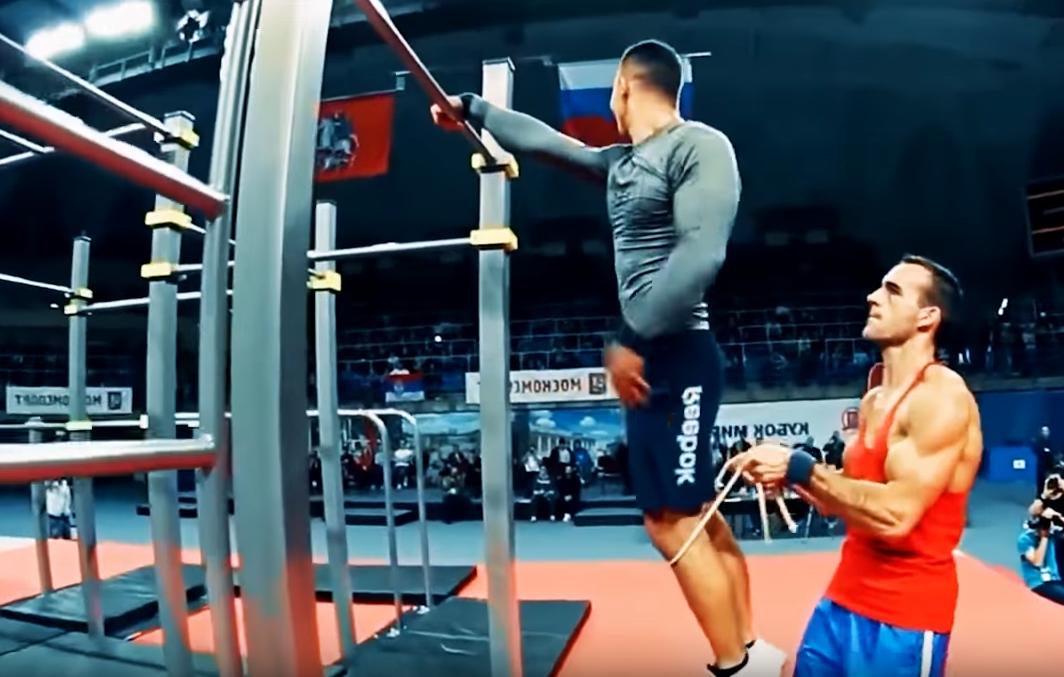 I'm curious if this is a "traditional" gymnastics move / pose or not and how one would train for such an amazing feat!

This is not a traditional gymnastics move, and in addition would be nearly impossible to pull off without assistance. (Note the guy holding his body out vertical with the rope).

It is impressive, but it is solely a strength move, much like the people that can "spider walk" while hanging from a bar and other similar strength moves.

Training for it is really nothing more than getting really really strong in your delts and lats, so pretty much traditional training with an addition of practicing the strength move that you are trying to emulate. One of the most basic is the "flag", which you can see him doing later in the video (Hanging sideways from a post, arms in a Y position, body sticking straight out).

There are some basic traditional gymnastics poses on the parallel bars and the rings shown, but most everything in that video is purely strength and flexibility.

After doing some more online searching it seems that the move is called "The Impossible" or "Close to Impossible".

There are a lot of resources online talking about this as well as some videos online from Dejan Stipke (the guy in the photo from my question) and other people attempting this move.

Just some resources I found on the topic:

And there are many more, just do a web-search. I hope this helps and satisfies other people's curiosity as well, maybe even motivate them to start training for this move.

Not the answer you're looking for? Browse other questions tagged calisthenics gymnastics or ask your own question.

5
Is there a purpose for this slapping at the top of reps?

9
What training pattern should I use to develop V-sit and V-hang?
7
Looking for a thorough gymnastics book
1
Sore Muscles from Gymnastics
0
Name for an exercise on chin-up bar with body rotation
3
Would weightlifting conflict with gymnastics/parkour?
3
What's this move called in gymnastics?
5
Thickness of gymnastics rings
4
Optimal Resting Period for Calisthenics / Bodyweight Training / Gymnastics?