I've recently signed up to a cross fit gym. I hear about people getting injured but also about people gaining strength and mobility after injury through cross fit activities. Does anyone know anything about this?

The long and the short of it is that we may never know because Crossfit has no mechanism in place to track injuries in its system. The system is one of affiliates, not franchises, which means any individual location has no obligation to provide a standard set of exercises, and there is no central location for reporting. One Crossfit gym might teach proper safe lifting technique. Another might advocate "whatever it takes" and brush spinal injuries under the carpet by claiming they "just didn't have what it takes". You might have a teacher with experience in athletic training or you might have a guy who attended the weekend seminar and believes that "pain is weakness leaving the body" and that injuries are a sign of weakness that you can't shed.

There have been a few attempts to get more data. One study is "The nature and prevalence of injury during CrossFit training" from 2013, which involved sending surveys out to people on Crossfit forums:

The purpose of this study was to determine the injury rates and profiles of CrossFit athletes sustained during routine CrossFit training. An online questionnaire was distributed amongst international CrossFit online forums. Data collected included general demographics, training programs, injury profiles and supplement use. A total of 132 responses were collected with 97 (73.5%) having sustained an injury during CrossFit training. A total of 186 injuries were reported with 9 (7.0%) requiring surgical intervention. An injury rate of 3.1 per 1000 hours trained was calculated.

Another, "Injury Rate and Patterns Among CrossFit Athletes", from 2014, used the same survey method.

Ultimately, it seems a lot depends on what gym you attend, how qualified the teacher is (all that is required for certification is a weekend seminar and a fee), how much supervision you get, and how good of a job you do of exercising safely and listening to your body.

I will add the bugaboo of more extreme training methods such as Crossfit, rhabdomyolysis, essentially your muscles self-destructing due to the kidneys finding too many contaminants in the blood from breakdown. This is one of the few conditions that Crossfit acknowledges is a risk with their program, but the official response is somewhat disturbing in that it implies that this is not an actual issue with the program, but rather in participants being weak, or at the least not "true" Crossfit athletes.

Athletes from conventional training programs have found that, relative to CrossFit-trained athletes, a) they cannot maintain similarly high workloads, b) they are likely to suffer orthopedic trauma trying, and c) they develop rhabdo at power output levels that are easily maintained by CrossFit regulars, including women, older athletes, and children.

In fact, many critics of CrossFit have adopted "Rhabdo the Clown" (or "Uncle Rhabdo") as an unofficial mascot to replace the other unofficial mascot, "Pukie the Clown", both being examples of unhealthily pushing yourself beyond your limits, but Rhabdo further illustrating that there is a potential for permanent damage from overtraining. 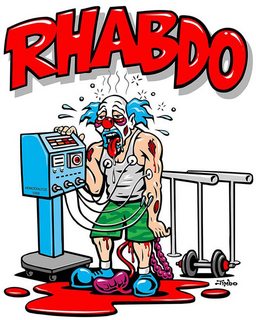 Crossfit has a very strenuous exercise regime, certain WODs do require a great deal of supervision. So yes there is a risk of injury but if you have a good trainer and a decent trainer to member ratio then it is a good option.

How do I judge a good coach/trainer? I pay attention to

If you see that happening then you are in good company.

Not the answer you're looking for? Browse other questions tagged gym crossfit or ask your own question.

9
What did I do to my knee, and how should I recover?
34
What is the proper procedure for showering in a gym locker room?
3
Headache when working out
1
Is Extreme Muscle Pro safe?
7
Can't sleep at night after workout
1
Home workouts or gym? Which one is better for adding muscles?
9
Fixing a disproportionately weak squat
0
Why do I look the same after 9 months of gym?