Weight size when training for power (not for maximum strength, resistance or body size)

If our main goal is to increase our power (for kicking or striking a ball, for example), what size of weight would we use?

Can you train an explosive movement (for sport mainly) doing weight exercises slowly?

In order to answer your question, we need to consider a number of concepts. The first is the force-velocity curve which, in the most simple terms, is a plot of the relationship between the force and speed of contraction. As contractile force goes up, contractile speed goes down, and the relationship is curvilinear.

This phenomenon is the consequence of motor unit recruitment and the size principle—"...motor units are recruited in a precise order according to the magnitude of their force output, with small units being recruited first, thus exhibiting task-appropriate recruitment" (emphasis added)—and the size of the load relative to an athlete's absolute strength. If the athlete lifts a one repetition maximum, they recruit all of their available motor units, and their peak force output is very close to the minimum amount required to accelerate the load. (Think F=ma.) At this end of the range, the resultant velocity is a function of force production and strength endurance; the athlete needs to produce enough force to get the load moving, but must also move the load quickly enough so as not to fatigue. At the other extreme, small motor units can easily meet and exceed the force requirements, and the load has insufficient inertia to provide resistance to movement that would allow larger motor units to be recruited; that is, the load moves before the larger units can be recruited.

It is common in the field of performance training to suggest that we can find the ideal power training load by superimposing a force-velocity curve on a power-velocity curve, as illustrated here 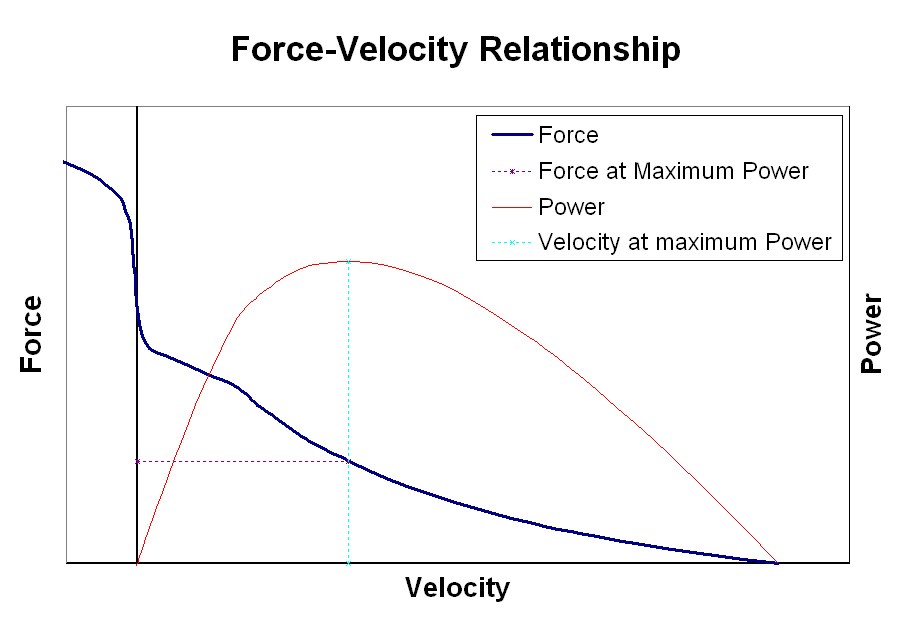 The cyan coloured line, in this figure located at about 40% of the one repetition maximum, represents the proposed ideal load, since that is where the greatest power is achieved. However, this fails to account for the differences in activity, and indeed our definitions of power.

Formally, power is the time-rate of energy transfer. And since energy is a function of velocity, power does indeed determine acceleration. However, this simplistic view of power fails to account for what we know about the mechanics of motor units. Motor unit development is highly specific to the activity being performed: the kind of power that Aroldis Chapman requires to pitch a fastball is very different from that Hafþór Björnsson requires to throw a 90-pound sandbag over 15-foot-high bar. In the former case, the projectile represents a small part of the load; the velocity at which the ball is pitched depends upon the speed at which relatively small motor units can be recruited to overcome the inertia of the arm complex and ball combination. In the latter case, the projectile represents the bulk of the load, and the height to which the sandbag is cast depends upon larger motor units.

Thus, distinct types of power have been identified, originally described by Bompa in his masterwork Periodization: Theory and Methodology of Training. Variations on these classifications exist, but the principle remains the same: power is specific to the activity, and thus power training must also be specific. Furthermore, as described by Bryan Mann in this excellent article, analysis of an individual athlete's load-velocity profile can help us identify the factors that are limiting power output. "By examining the slopes of these curves, we can see if individuals are more deficient in velocity or force." In such cases that force is deficient, slow lifting may initially improve power. This explains the observation found by research studies, which tend to use novices.

The extent to which you focus on explosive training will depend on the sport and the target movement. Generally you want to focus on rate of force development, as opposed to maximal strength, if the following criteria are true:

The example you give of striking a ball would meet these criteria.

A typical protocol for improving rate of force development is 3x3 reps at 90% maximum load, with a 5 min rest between sets. The focus should be on moving the load as fast as possible. Note that whilst this is training you to generate force more quickly, the actual speed of movement in this case will be slow, due to the high load.

Other training methods include performing the target movement with additional resistance, although gains from this are likely to be limited. Also consider exercises such as bench throws, medicine ball throws etc. - these can allow higher force production as they don't require you to decelerate at the end of the movement.

The force velocity curve is the answer: https://www.youtube.com/watch?v=WlHjg8tHfzU

During explosive moves body uses same muscle fibers as with maximum strength. So that part of training can be useful - I mean - high weight low reps.

Any person at the gym can see that it is not enough. For some, missing part is core training. So all deep muscles that plays role when it comes to stability. Reasoning is that when you can stabilize faster, you can change you position more often. That sounds reasonable to me, however I'm not sure about the training. That is my personal opinion. Sometime ago I would suggest exercises with instable position - like squats on bosu. Today, I'm more convinced to asymmetric exercises - like one leg squats, Bulgarian squats. With speed drills.

If your target is running sport - like football - please look here. If you plan to be better with fight sports - that require a bit different coordination...

Stretch. To have wide motion range. Also that way you can keep fascias in good shape which gives deep filling. As a side note. 1. That is not needed in terms of strength. 2. There are some evidences that it helps with injury prevention, at list in football.

Not the answer you're looking for? Browse other questions tagged power or ask your own question.

7
How do I track improvement in my box jump?
1
Do slowly lifting heavy weights increase general power/speed/impact without weights?