How to prevent "good morning" when squatting?

Since last two squat sessions I have noticed that I feel my lower back when I squat for 5x3. Now this is due to good morning happening at the rising part of my squat.

Lowering the weight is one solution but then how am I supposed to progress if I lower the weight?

bodybuilding squats powerlifting
Share
Improve this question
edited May 7 '18 at 19:11

What is a "good morning"?

Just to add context, a "good morning" is when you're doing a squat, you go down to the lowest point, but then you extend the knees without maintaining an upright back.

This results in the butt being raised up, but not the chest, so you're just bending forward, with a lot of weight on your neck rather than your shoulders. Then you need to hinge the torso back up. 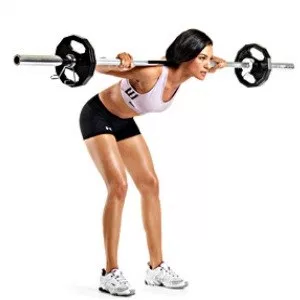 This is a result of not moving the butt and torso as a unit, but rather separately. The good morning stance can lead to severe back injury if repeated instead of corrected.

Onwards to the question

Now, lowering the weight is one solution but then how am I supposed to progress if I lower the weight?

This is a very common state of mind.

Listen, if you can't squat 80kg without going into a "good morning", then you can't really squat 80kg.

Lowering the weight may seem like a humbling thing, but check your ego at the door.

The reason a "good morning" happens is because you're not engaging the gluteus k during the lift. So what should you do to train them? Well, for one thing, you should be squatting with lower weight, because this helps build the glutes. If you stay in the 70-75kg range for a few weeks, then try 80 again, I'm sure you'll find the progress you want.

Additionally, you can do auxiliary exercises that help train the gluteus muscles, such as deadlifts, back raise, and whatever else.

But the key takeaway here is that if you can't properly squat X kgs for Y reps, then lower the weight or the amount of reps, and make sure that ALL of your reps are proper.

Feel free to post a video of yourself squatting if you're looking for a form check.

Firstly: Confirm that this is what is happening. Is your back becoming more horizontal at the bottom of the squat, and are your knees moving backwards so that your shins are nearly vertical? If yes, then that is indeed a good-morning squat.

If you were squatting heavier, I might suggest adding more quad-focussed assistance exercises like high-bar squats or front squats, however if your squat is at 75kg for sets of 5, I'd say you should just be squatting. (You don't need the added complexity at this point in your training, and adding squat exercises that have different mechanics may cause you to confuse their movements during the lifts.) Just lower the weight to a point where you can squat without it turning into a good-morning, and focus on keeping your knees forwards at the bottom. Keep training and increasing the weight from there, and as long as you focus on not letting the knees slide back at the bottom, you should be able to progress through this sticking point just fine.

And if you're struggling to improve your squat at these weights, you most likely also need to be eating a lot more.

Edit: There are now three conflicting answers here, each claiming that the cause is a weakness of one of the quads, glutes, or back extensors. That's a pretty strong reason to just keep squatting while focussing on maintaining correct form. Whereas if you go off and do a bunch of glute-specific training, and it turns out that a glute weakness wasn't actually the problem, your squat is only going to get worse.

An easy way to view this is you are too prone to leaning forward when you come up from a squat. So, how can you practice staying more upright?

There is an art to cueing. What works for some doesn't work for all. However, you can see the general idea above is to get the spine more upright. For instance, the body tends to follow the eyes. If you're looking down, that could cause you to round over some.*

This is the easiest and fastest route to correction, though it's not fail-safe.

Sometimes voluntary action just isn't enough. We can then change the environment.

Because of the wall in front of you, you won't be able to lean forward much (at least not without hitting your face). It's a good way to groove the movement and get the muscles you want primed and acclimated. For instance, you could do this as a warm-up, or in between squat sets.

You could take this further and do something similar with a bar on your back. For example, if you set-up your squat so the bar is very close to the rack, you will have the same effect as the wall squat. That is, if you lean forward, the barbell will hit the rack.

This is in essence what a Smith Machine does*:

Front Squatting is another approach. Because the bar is on the front of your body, you will be forced to stay more upright. If you lean forward with the bar on front of you, you'll dump it. 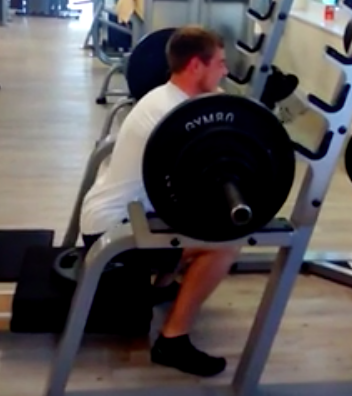 Practice during the day too

Finally, if you say, sit in a rounded upper back posture all day (kyphosis), or you just lean forward staring at a computer too much, that could be worth working on too. After all, if you're practicing leaning forward all day, it's natural you get very good at that motion.

In fact, notice the position above. The person has the hips and knees bent. They are actually in a squat position. They aren't doing it intentionally, but if you sat like a red X above, you'd be practicing being in a squat with a forward lean for hours and hours every day.

More help in this domain.

A muscle by muscle focus can be overrated

Many will approach a problem like this as "you're trying to use your posterior chain more than your anterior."

Which makes sense. If you were to squat without leaning over at all, you're going to feel that more in your quads than your lower back, glutes / hamstrings. After all, this is why a Good Morning is a posterior chain exercise. (Nobody does them because they're trying to hit their quadriceps.)

You could even get fancier and say "Your thoracic extensors aren't working as well as they should." Though that's not necessarily true. You could be leaning forward but not rounding forward. There is a difference. (Rounding forward is where the injury concern comes in. Leaning forward without rounding is fine. Again, that's the point of a Good Morning, and the Deadlift exercise.)

Again, there can be merit here. However, if you instead focus on the movement you're trying to correct, the muscles will take care of themselves. Plus, there is no guarantee if you went on a couple month quad. strengthening program, you'd suddenly start squatting more upright. The body is rather specific in its adaptations. A strength gain can happen in the absence of a technique change. (Just because you take steroids doesn't mean you immediately can hit a baseball further. You need to still practice swinging a bat.)

*I realize some of the die hards here may not be partial to looking up ala Rippetoe fans or those worried about hyperextension of the neck. As well as some might not like the idea of using a Smith Machine. Keep in mind the question is how can the person stay more upright. It's not how can they squat with everything in ideal alignment. For some, a compensation at e.g. the neck can be worth better position at e.g. the lower back.

This is something I've been struggling with and trying to work through. From my experience there's a third possbility (apart from spinal erector or quad weakness): glute weakness or inaction. This could be a little controversial but I think it stands to reason.

To help, you could concentrate on opening up your hips aggressively from the bottom position, and as always lowering the weight until you can complete the movement with proper form.

Not the answer you're looking for? Browse other questions tagged bodybuilding squats powerlifting or ask your own question.

25
Persistent mild knee pain due to squats - push through or stop?
5
Panic when squatting
5
Should I squat ass to grass before adding load?
4
Is there anything wrong with doing one-legged bodyweight squats in this way and what can I improve?
1
Total weakness in squats today. What does this mean? Not enough rest? Bad food choices? Etc
2
Concerned after many squats and suddenly felt sick / super-sleepy / light-headed for 1 whole hour?
4
Preventing upper back from rounding while squatting
1
Stick with progressing rep ranges or switch to small weight increments?
1
Is it normal, after 3 years of weight training, to find the 28kg dumbbells heavier than 16kg when I grab them on the rack?