Going through an answer to Clear cut explaination of threshold training I found a useful answer, where this was stated:

Now, since you had a doctor do your HR zones, you may actually have a decent idea of your HR max. (Ignore 220-age, it's meaningless drivel. I'm 51 now and I can still hit 190. It was originally based on bad science, and repeated because it was easy). Your AnT [Anaerobic Threshold] is going to probably be in the neighborhood of 80-85% of your HR max, but that's not 100% given.

Me being a runner, I have used this formula sometimes to calculate how intense my efforts should be. Then, some time before engaging into more intense training, I did a professional test and the results were almost the same than 220 - my age.

I've seen this formula being used normall in some answers to this site (see them in Should my running be aerobic or anaerobic? or What is my target training heart-rate?), so I wonder:

In my opinion (especially since it is my answer you linked above) :), the 220-age should never really be used. There is a better generic formula (See the bolded parts of the study conclusion below), and there are also cohort (group) specific formula that may be available that are more accurate.

This is a study review of the science behind the 220-age calculation, and a review of the other attempts at a max HR formula over the years. The conclusion is as follow (emphasis mine):

Forgive me if I'm off some here as I'm diving way back in my memory bank, but this is what I remember from my exercise physiology classes.

The two main times you want to be careful with this are,

Lance Armstrong was heavily studied in his heyday:

(Note, this was a highly debated paper due to the efficiency gained finding, but I don't see any issue using the max heart rate numbers.)

You can see he's over performing what 220 - your age would give. From an absolute standpoint, it's not a huge over performance, but from an athletic standpoint it is.

When does a person become "trained"? I don't remember ever getting a clear answer on that. But it is not just because you jog here and there.

Nor is it so consistent where once a person is trained, you know they'll over perform by X amount. There is enough variability you have to approach each person as their own, otherwise, if you're say, programming someone's endurance work, you could be off by a considerable amount.

What I remember when in the lab was, if a person has some serious endurance training background, just beware they might not fit the models as well. In fact, I think they often underperform. (They get really good at producing more blood per beat, opposed to beating faster.)

1) A regression equation to predict HRmaxis 208 − 0.7 × age in healthy adults. 2) HRmaxis predicted, to a large extent, by age alone and is independent of gender and habitual physical activity status. Our findings suggest that the currently used equation underestimates HRmaxin older adults. This would have the effect of underestimating the true level of physical stress imposed during exercise testing and the appropriate intensity of prescribed exercise programs.

The gist being as age goes up, the traditional formula progressively holds up worse compared to the regression equation they found, 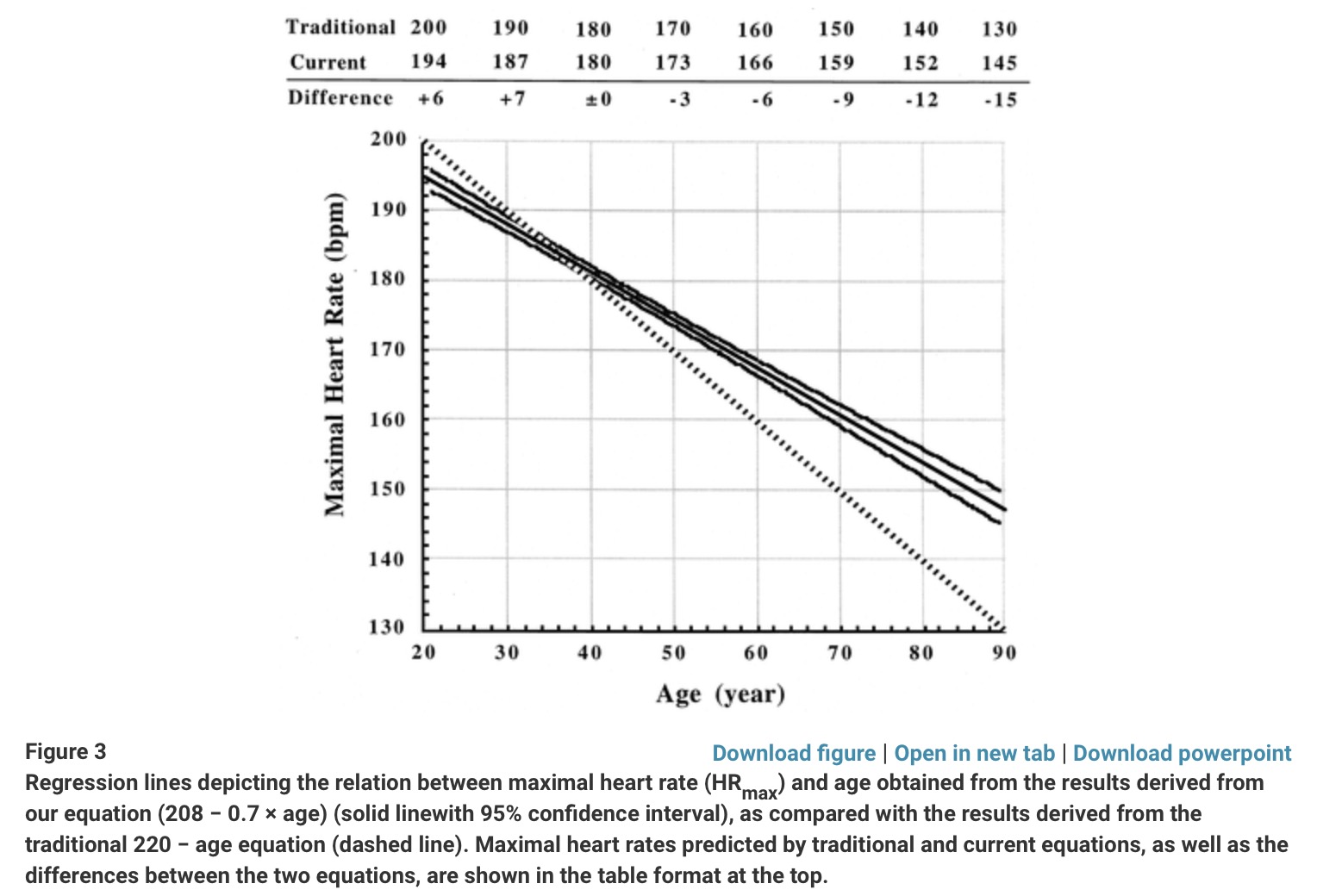 Back to physical activity:

As you can see, this study didn't find a difference based on activity level, but their criteria wasn't e.g. high level athlete. It was simply that the person engage in endurance training a few days per week for at least a couple years. That ain't Lance Armstrong.

Second, they did find a difference, but it wasn't statistically significant. As I hit on before, the differences tend to be small, but noticeable when you're focused on high level performance.

For instance, in their lab based study,

Again, no significant differences in the HRmaxregression equation were observed between men and women or between sedentary (212 − 0.7 × age) and endurance-trained (205 − 0.6 × age) subjects.

(And just to show the inconsistency, here's master's athletes over performing the traditional formula.

Their average age was 59, but average max heart rate was 169. It's possible everyday runners on average underperform (stronger heart), but then really high level people over perform (stronger and faster).)

Furthermore, through the adult lifespan, the standard deviation in beats was still 7 to 11. That's a pretty big chunk we could possibly just chalk up to genetics.

The authors even show how in their model, you could still be off by 20 beats due to the standard deviation. Modeling humans is hard :).

Sorry if that's all a bit convoluted, but that's kind of the point. As they write, if it's important, you should directly measure for that person.

Essentially, you always have to worry about using the formula, but you worry more when the person is highly endurance trained and or older.

A much easier way to go about programming is to take the person's best time and use percentages off that.

Lastly, and where you have to be really careful with the older crowd, is medication can throw this all out of wack. When a person is on blood pressure medication, you don't want to be looking at heart rate at all. The medication purposely limits how high the blood pressure can go, which is going to affect how much output the heart can generate. You can have people feeling exhausted at only 90 beats per minute. (Little longer discussion.)

In which case you really need to be going based on how the person feels. I've seen trainers damn near make someone collapse because they thought the person was lying to them about how hard they were working, since the trainer was so focused on the low heart rate.

My answer is a little more nonchalant. There are people out there who are ardently spiteful of a simple formula to tell you what your HR max is. They often start with anecdotal stories of, “Well, I’m 67 years old and my max is still in the 190’s.”

So, if that’s true, then as a Mathematical Law and axiom, the 220-age formula does not hold up. You won’t find a mathematical proof for it, and there will likely be people who fall way away from those numbers.

That said, I’ve never thought of 220-age to be anything more than a simple way to pretty accurately “ballpark” an expected max HR for MOST people.

The statistical distribution probably very much looks like a normal distribution with the vast majority of people falling within the “peak” of the bell curve with outliers spotted around. Ultimately, 95% of people will fall within 3 standard deviations of the norm.

What does this mean? It means that 220-age isn’t perfect, and I don’t believe it was ever meant to be. However, for the vast majority of people, if you performed the 220-age calculation, and compared that to a medically accurate max HR calculation, you would find it to be “accurate enough” for the sake of training.

I look at it this way: My Garmin watch calculates my max HR as 184. I’m 36 years old. My Garmin chest strap which pairs with it has hit 183 and 184 a handful of times. It’s pretty rare. That tells me that there is probably a small error rate with the chest strap and watch, and some flaws with the formula, but it’s pretty darn close. Furthermore, on the occasions when I have hit 183 or 184, I didn’t really need any devices to tell me that I was approaching that threshold. My body was pretty much pissed at me, screaming for me to stop.

Not the answer you're looking for? Browse other questions tagged cardio heart-rate anaerobic athletic-performance or ask your own question.

8
Should my running be aerobic or anaerobic?
2
Clear cut explaination of threshold training
2
What is my target training heart-rate?