Best sports to preserve your joints later in life?

I'm getting into sports/fitness a little later in life (I'm a 24 year old female). My 59 year old athletic mom has gotten very bad pains in joints over the past few years and attributes it to playing competitive basketball for all her life. I was thinking about trying to get into marathons, but she has warned me that long distance running is very tough on the joints and I can see that she struggles with her pain. Is there a sport/fitness practice that prevents or reduces joint pain as you age or will any sport hurt me in the long run?

As your question implies, running is where this question often revolves. Let's start with that and work from there. 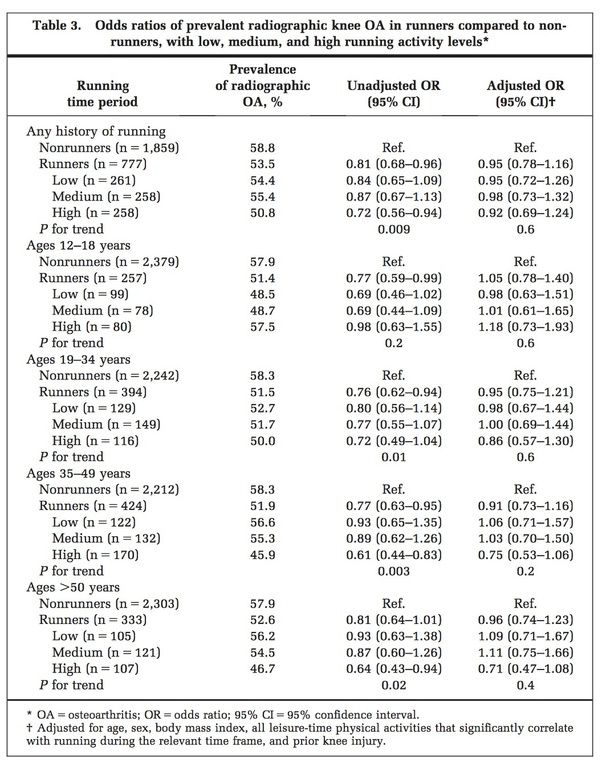 Next, runners had less incidence of knee pain too: 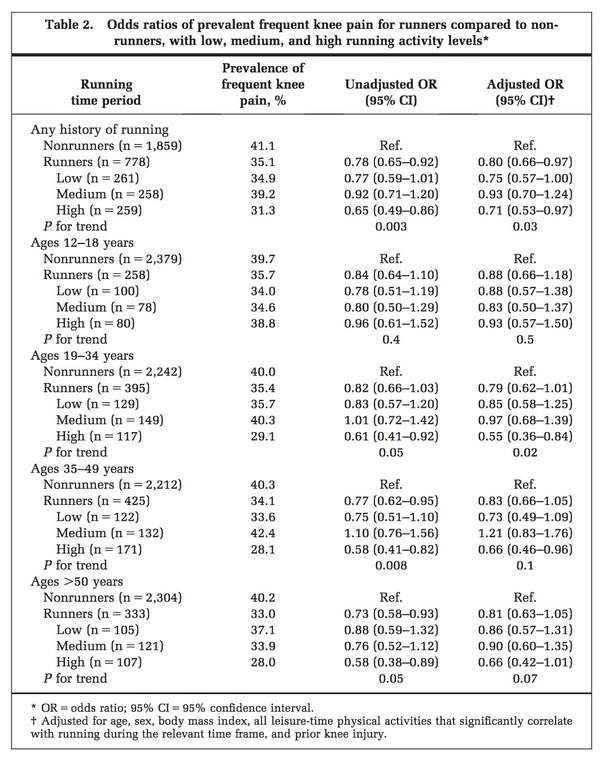 Now this isn't exactly as straightforward as running is the cause for the benefit. For instance, runners are probably going to be lighter, less likely to smoke, all in all take better care of themselves. That's why you'll see above the adjusted numbers are much higher than the non-adjusted. The researchers tried to control for these kind of variables. Still though, running maintained a benefit.

You can go down a rabbit hole with this, but suffice to say, the general idea out there that running, or loading your joints, is bad, is wrong. It matters how they're loaded.

Take things to a professional level? Yeah, that can be too much.

Recreational runners had less chance of arthritis, but competitive had greater.

The fastest way to destroy a joint? Completely immobilize it. Check out a Google Scholar search for "joint immobilization joint degradation" if you want more details on how bad it is for a joint. It's basically the fastest way to cause arthritis / destroy cartilage. The phrase "motion is lotion" is literally true for the human body.

Exercise can overcome a lot

I want to further emphasize how beneficial activity can be. If there was one sport in 2019 we'd say do not do for your health, it would probably be American football, right?

Yes, they do have more risk of neurological problems, but they have less risk of heart disease, cancer (and even violence). For all of us, including football players, those are way more likely to kill us than a brain disease, so that's why they end up living longer. (Notice below while the numbers for say, Parkinson's are alarming on a relative basis -2x greater risk- on an absolute basis they're still very small -only 2 deaths.)

(Here's a more in depth write up on that, and another study backing up the general increase in life expectancy.)

I'm a personal trainer who has worked with a lot of older clients. It is extremely rare I get one who, because of their injury history with sports when they were younger, has genuine issues in their e.g. 60s and 70s.

What's way, way, more common, is the person did play sports, but then their 30s came, kids came, they basically became sedentary for 25 years, everything started to hurt, and they blame it on sports from three decades ago.

Furthermore, it provides a nice excuse for the person to continue to avoid becoming active again. They fall into this downward spiral. "I can't exercise because my knees hurt" never considering maybe their knees hurt because they don't exercise. (Not just their fault. The medical community hasn't done a great job on this front either.)

Fact is, few people ever push themselves to where activity harms their health. Even fewer do it to where they will have, relative to being sedentary, a forever physical impairment.

Not to mention the body has all kinds of defense mechanisms against this, like pain. Did you know there is not one single documented case of dehydration death in a marathon? None! Many of the deaths are from people drinking too much water.

All that said, to get back to your specific question, doing one or two marathons, provided you properly train for it, is not a recipe for crippling senior years. Doing marathons for years on end? That's where people tend to cross the line into too much :).

The way to preserve healthy bones is to put them under stress (not major one). To stay healthy I would say that following WHO guideliness will be the most beneficial. And if I recall correctly right now the recommendation is to have minimum 30 minutes of aerobic exercise daily.

Apart from that some tailored strength trainig would allow You to build muscles which are meant to stabilize the joints eg. rotator cuff stabilizing shoulder joint.

That being said it is better to rather be active than not:

Moreover, physical inactivity is estimated to be the main cause for approximately 21–25% of breast and colon cancers, 27% of diabetes and approximately 30% of ischaemic heart disease burden. ~WHO

First, if you really want to get the maximum possible longevity out of your body, avoid contact sports. If you don't believe me, look up Joe Montana and his current health problems. His body is a mess. Joe Namath had arthritis at the age of twenty three and has had both his knees replaced.

Second, avoid extreme stuff. A five mile run is great, but twenty six miles is a completely different matter. If you need a challenge, in my opinion, you would be better off focusing on running for speed rather than distance. It is the distance that gets your joints, not speed. So challenge yourself with running three miles as fast as you can, and forget the marathon.

Third, cross-train. I dont' mean Crossfit. I mean crosstrain. For example, take a run to the gym and lift weights and run home. Or lift weights and then swim. Or do Pilates (at an authentic Pilates studio) and then swim. This kind of cross training "spreads" the wear and tear more evenly over your joints. In other words, anything you can do to make your "movement-diet" less repetitive will help extend the lifetime of your joints.

Fifth, if you can keep your weight down, then this reduces the wear and tear on your hips and knees.