What is an easiest way to identify whether a muscle is tight or not?

This is actually a interesting question. Someone who has thought about this is Jules Mitchell, who just put out a book out on stretching. If I recall correctly, in a podcast, she said that "tight" is not a meaningful term in the world of anatomy or biomechanics. The reason is that there is no way to measure whether a muscle is "tight" or not. A muscle might be perceived as "tight" by an individual, but there is no way for a medical practitioner to confirm or validate that perception. The medical/biomechanical world deals with things that can be measured, so "tightness" just doesn't have place in that world.

At the same time, if someone perceives a muscle as being "tight", this must be an indication that something is going on. Mitchel suggests that when someone perceives that a muscle is tight, there might be some kind of microscopic tissue damage, and the nervous system is trying to protect the tissue by preventing the person from moving that part of their body. Tightness, then, is a protective perception created by your nervous system in order to prevent you from moving some part of your body.

You can put this in the box marked, "interesting idea".

I'll approach this from two angles. For lack of betters terms, let's call one the microscopic angle and the other the eye test.

Without going into the weeds on this, muscle contracts using filaments. "The Sliding Filament Theory of muscle contraction." Or, "certain things latch onto to other things":

Above GIF made from this video: https://www.youtube.com/watch?v=0kFmbrRJq4w.

A tight muscle can simply mean the filaments are already maximally latched onto one another: 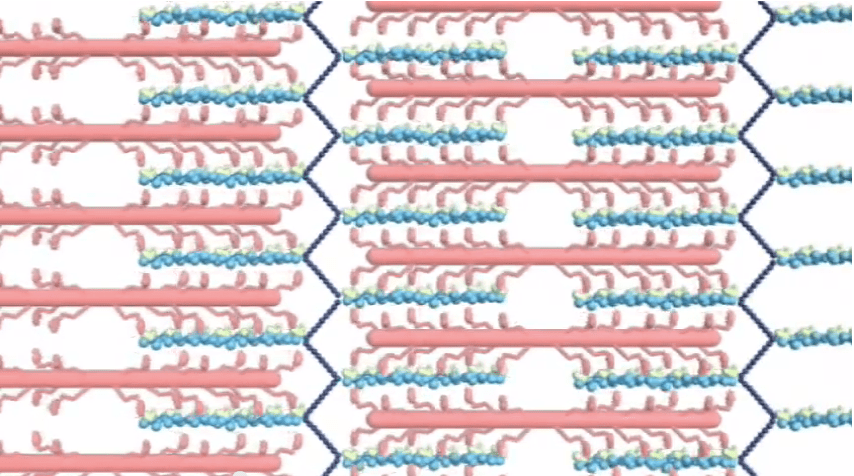 The muscle can't contract any more, because there's nothing left to latch onto.

Or, you could say a tight muscle means the muscle is at a place where the amount of tension it can produce is less than it's peak. There is a length-tension relationship. If the muscle is too stretched, it can't produce as much tension. Same goes for if it's too tight. 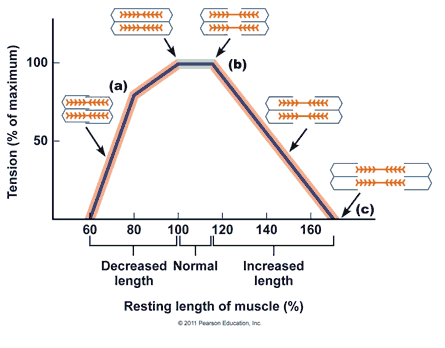 A chronically tightened muscle is a muscle which chronically cannot produce as much tension as it otherwise would. This means a tight muscle can become a weaker muscle. Someone held in a cast would be one way of showing this.

She broke down a lot of muscles, and conceived specific tests to assess the length of each one.

Basically she took the actions of a muscle, say the hamstrings, which flex the knee and extend the hip, then came up with an assessment which extends the knee and flexes the hip (the opposite) to assess whether the hamstrings are "tight."

This is where tight can be rather subjective. In her world, if you couldn't fully straighten your knee while your hip was flexed a certain degree, then she'd categorize you as tight. However, directly correlating this tightness with, well, much of anything, is where you won't find much.

This is true of virtually any kind of pain you can think of. What causes one person's pain does not cause another.

In certain areas though you can find that say, a certain amount of lacking shoulder range of motion correlates with pitching injuries. So, for them, that's tightness. If you don't pitch though? You're not more likely to have an injury...so are you tight then?

This can become a colloquial or language question as much as anything else. I'm a personal trainer. When people tell me they feel tight, my first thought is not the sliding filament theory! Many say they're tight when really they're just sore and consequently averse to movement. (They don't need to be stretched; they need a few days off and they won't feel tight anymore.) Tight tends to have a negative connotation; loose or flexible a positive connotation, but as the length-tension relationship indicates, you don't want muscles which are too stretched either.

Some more about the above-

Strengthen Your Core and Loosen Your Hamstrings

Not the answer you're looking for? Browse other questions tagged muscle tight or ask your own question.

3
What is the cheapest, quickest way to gain some basic muscle?
16
What can I do to prevent my (outer) shins from tightening while running?
0
How to workout around a tight Levator Scapulae
3
Anything I can do to keep the muscles look tight after finish training?
3
Eat more or less to lose fat and gain muscle
2
When a muscle can flex so tight it's painful, is anything wrong?
6
What is a muscle knot?
0
What does "genetic potential" really mean? Does it really mean anything?
1
Wearing tights while doing squats and deadlifts
6
Is physiology of muscle growth a pseudoscience?