Q: Is there an analytical relationship between the weight of your compound lift one rep max and the various accessory workouts of that muscle group?

For example, if I can squat 315 lb, is there a certain amount of weight I should be able to do on leg curls, or, leg extensions? If I can bench press 215 lb, what should I be able to move during tricep extensions or chest flys? 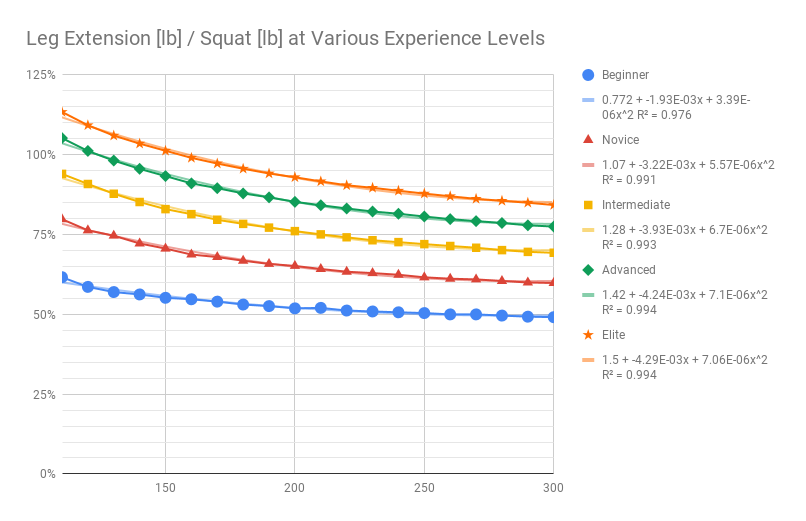 Would this be a valid way of determining the amount? Using their built in calculator, two reps at a 315 lb squat would put me at "Intermediate". So the chart above means I should be able to do 76% of my squat weight for a leg extension (240 lb).

Your methodology based on the data found at strengthlevel.com is unsound.

They are simply collecting self-reports of 1 rep max lifts in various exercises. Their classification of Beginner, Novice, Intermediate, Advanced and Elite levels is simply the 5th, 20th, 50th, 80th and 95th percentiles of each data set. Also, from my sampling of their website on the Wayback Machine, the size of their data sets is monotonically increasing which strongly suggests that they never age out or replace any data, so regular users of their site are going to have contributed many data points over months or even years rather than a single snapshot of a cross-section of the human population on a particular day.

Given that there is a large difference in data set size between exercises, the population of lifters contributing to some exercises is much smaller than others and thus may represent groups that are not comparable - e.g. perhaps some exercises are only performed/tracked by Beginners or Advanced lifters because of difficulty or utility.

However, even if you did have a rigorous set of data that gave you accurate distributions of people's lifting ability for a given body weight, collecting data on the ratio between a particular compound exercise and an isolated movement for the same set of people is going to have a wide spread. A person who perfects their squat over the course of years but never does a leg curl, is going to do much worse if they suddenly try one compared to a person who has done both. Conversely, two people who train for both exercises, but one has a poor form on their squat that is holding them back are going to have different ratios.

Variations in body proportions will also affect the performance ratios of people controlled for body weight and comparable ideal training.

Not the answer you're looking for? Browse other questions tagged weightlifting strength compound-exercises or ask your own question.