What are key points to focus on when trying to increase the size and definition of the bicep?

How does one work the bicep to it's max? Admittedly, I know I'm guilty of lack of symmetry because I do a lot of exercise that build my triceps. Therefore, I think my biceps have suffered and I would like to fix. 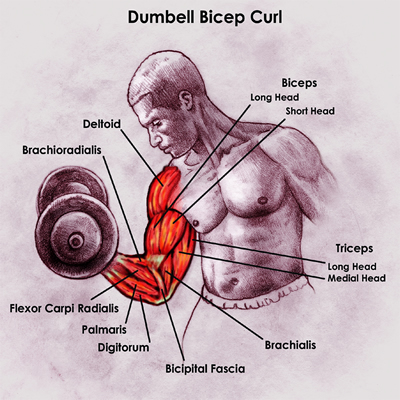 Arnold Schwarzenegger believed that the tricep should consist of 2/3rd the mass of the upper arm and the bicep consist of the remaining 1/3rd. Other bodybuilders may propose other proportions to achieve different aesthetics, but Arnold's record number of Mr. Olympia wins back in the days when mass was not the only name of the game has elevated him to be the authority on bodybuilding aesthetics.

The peak of the bicep is how high the bicep protrudes. It is targeted by focusing on the end of the concentric contraction (when the forearm is close to the upper arm). If one has poor peak, one can just do the upper half of the rep or squeeze at the top of the rep.

The length of the bicep is how well the bicep connects at the extremities, that is, the elbow and shoulder. The length of the bicep is targeted by focusing on the starting position of the rep, when the arm is fully extended. Many novices do not have good bicep length because they don't fully extend the arm on each rep. They crank out reps too fast and use inertia to help them at the bottom.

The outer (or long) head of the bicep is the part of bicep away from the rest of the body. It is targeted with a narrow grip on the bar when doing barbell curls or curling towards the opposite chest when doing dumbbell curls. Most beginners have a smaller outer bicep than their inner bicep. Just look straight down at your bicep now and flex. You may noticed that your bicep is lopsided and is more massive near your body. 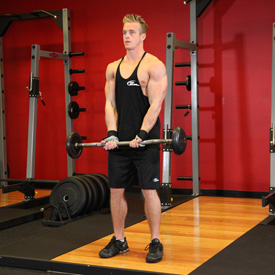 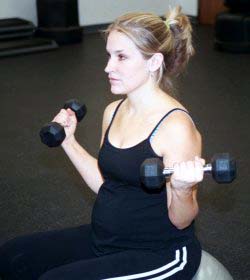 Source for all the above properties: The New Encyclopedia of Modern Bodybuilding by Arnold Schwarzenegger.

The width of the bicep is how wide the bicep looks when someone stares at you from the front. According to fitness model Rob Riches, the width can be developed by curling with a long bar, such as an Olympic barbell. The long length of the bar exacerbates any imbalances you have between your two arms and cranks the stabilizer muscles into overdrive. The extra torque on weaker arm adds width to the bicep.

Olympic Bar Curls. Biceps have always been a favorite muscle group of mine to train, but since I’ve started using the Olympic bar to curl with, I’m noticing my arms start to thicken out, where as before they had good size from the side view, but when viewed from straight on, I felt as though they lacked the width I should have in them.

I'm not a bodybuilder and I don't know what your goals are, but let me throw this out there:

Gymnasts are wildly strong in the upper body. Their bicep development is particularly beastly. 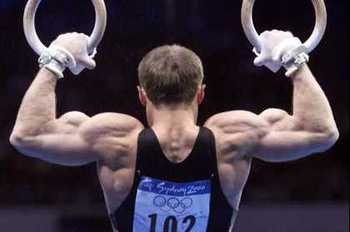 I cannot find the particular quote, but I recall that Coach Sommer, author of Gymnastic Bodies, has stated that gymnasts' extraordinary bicep development is due not just to the obscene amounts of chin-ups and pull-ups that they do on rings, but rather to the quantity of straight arm work that they do.

Take an iron cross. The weight of the body must be suspended by the arms. The biceps, which do much of the work, are at their most mechanically disadvantageous position: totally straight. It takes a tremendous amount of force to maintain that position due to the leverage being exerted.

Not the answer you're looking for? Browse other questions tagged exercise weightlifting exercise-technique workout-routines or ask your own question.

10
what exercises are good (and bad) for striking speed in martial arts?
7
Am I missing exercises for a balanced total body workout in a 3 day split?
4
Which Muscle Groups to Work Out Together
6
is it necessary to do exercise that target only one muscle a day
6
How to improve symmetry in both strength and size
4
Can't seem to do a proper bench press ... any reasons as to why?
1
iliotibial band pain when trying to increase cadence and run faster
2
Leg Exercise Volume being way higher compared to Upper Body?
1
Ideal order and structure of routine?