Why don't people get fatter even faster than they do? [closed]

Ask Question
Asked 2 years, 5 months ago
Active 2 years, 4 months ago
Viewed 266 times
0
Closed. This question is off-topic. It is not currently accepting answers.

Americans are overeating by at least 300 kcal/day on average, according to some sources:

Twenty-five years ago, the average American consumed about 1,850 calories each day. Since then, our daily diet has grown by 304 calories (roughly the equivalent of two cans of soda). That's theoretically enough to add an extra 31 pounds to each person every year.

(Since 25 years ago, they were grossly overeating too, I'd guess this number is much higher, but let's use this conservative estimate) 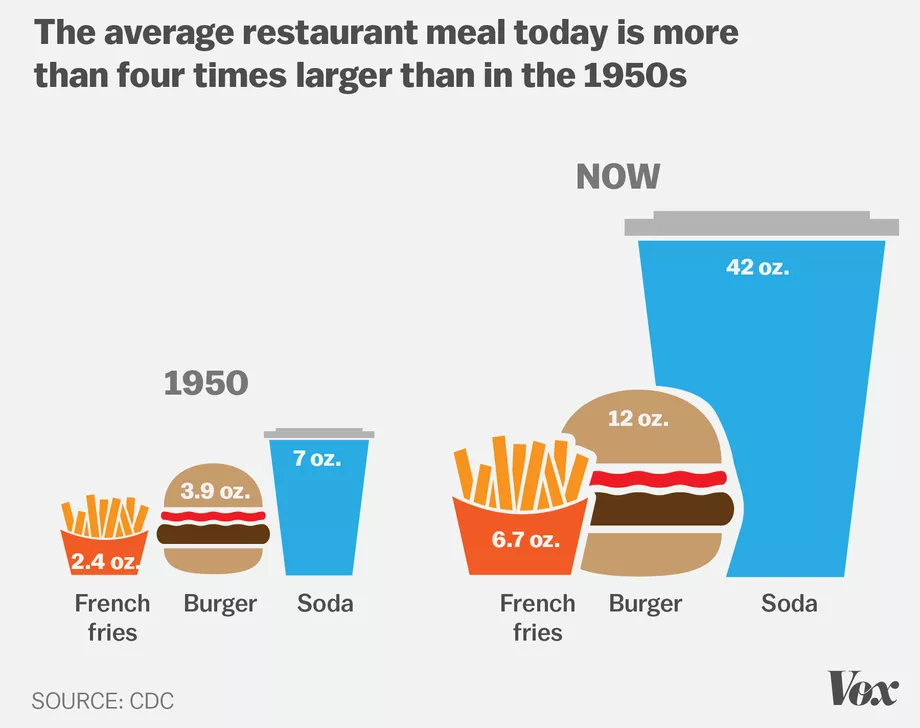 Why aren't Americans gaining 31lb per year (or much more)?

Instead, the average person only gains about 2lb per year in his or her 20s and 30s. Why?

Here's why @C.Lange's "equilibrium" hypothesis does not hold (too long for a comment)

If this person eats at a 300 kcal/day surplus, his equilibrium weight is 300lb, and the initial weight gain (31lb/year) is mostly unaffected by the hypothetical increases in TDEE down the road.

(If my estimate that Americans are overeating by 1000 kcal/day is right, then this person should balloon from 200 to 500lb)

But we don't see this happening. People eat the standard American diet of pizza and donuts, gain weight, but they do it slowly.

I would guesstimate that most people in the developed world consume at least 1000 kcal more per day than they spend.

While I can't confirm that the 1000 kcal fact is true, it is fairly common knowledge that the United States of America has an obesity epidemic. Any quick search can show you hundreds of charts and figures. I won't argue that we're overeating. Personally, I'm from Canada and while it isn't quite as prevalent here, people still overeat.

If calories-in-calories-out is correct, this overeating should lead to 2lb (1kg) of fat gained per week. However, the average person only gains about this much per year in his or her 20s and 30s. Why not much more?

If you think about it, this is all about equilibrium. I currently weigh a modest 200 lbs. If I put on 100 lbs by overeating, I wouldn't necessarily gain 100 lbs of fat. My muscles would build up in order to move my body around (assuming I wish to stay mobile). As such, my TDEE would increase. At some point, my mass, the muscles I've gained to move my mass, and the number of calories I enjoy intaking will all balance, and I would stop gaining weight.

This scholarly article that shows that obese individuals have higher muscle activation even though overall muscular strength is reduced. Articles like this prove that we can't assume 100 lbs of weight gain is 100% fat.

For TDEE comparison let's assume for every 100 lbs of weight gain, 25% is muscle mass.

That's theoretically enough to add an extra 31 pounds to each person every year.

I think this is where you might be getting confused because this is a misleading statistic. The source states that we're overeating by 304 calories a day. Which then finds that:

Additionally, the source states that the average diet used to be 1850 kcal a day twenty-five years ago. With 304 kcal added to that, we're now at a daily consumption of 2154 calories on average. The gentleman in my example would be losing weight at this level of eating. It's not that everyone is putting on fat every day, it's that America as a whole is just heavier already. That's why you see the weight being gained slowly because most people, on average, are already eating in the 2100 calories range (which includes that 304 increase) instead of the 1850 range.

Not the answer you're looking for? Browse other questions tagged diet body-fat metabolism or ask your own question.

3
Why do I get nauseous after working out, but ONLY in the afternoon or early evening?
1
How should thin people balance the exercise and diet such that they don't lose weight?
1
How much stronger can you get as you get fatter?
3
Weight has gone down several pounds, but not trying to lose weight and feel fatter. Why?
5
If the main part in getting "six pack abs" is removing fat, why don't we see people during famine have "six-packs"?
1
Why do muscle gain articles focus on total calories rather than protein for skinny high metabolism body types?
3
Do people with slow metabolism tend to gain weight (fat) if they stop exercising?
1
Will stomach fat help to create faster muscle growth on biceps/chest than eating right