Is variation of movement important in strength training? [closed]

Ask Question
Asked 1 year, 7 months ago
Active 1 year, 1 month ago
Viewed 156 times
1
Closed. This question needs to be more focused. It is not currently accepting answers.

Exercise is the thing we must do to replicate the conditions under which physiology was - and still is - adapted, the conditions in which we are physically normal.

In other words, exercise is substitute cave-man activity, the thing we need to make our bodies, and in fact our minds, normal in the 21st century.

Cave-men did not perform squats on boso balls. Neither did they train their rotator cuff with an elastic band. They did not foamroll and probably followed no structured stretching program. However they did not benchpress either. And they probably carried heavy objects on their sides or on their shoulders. Maybe they climbed over and under objects (e.g. fallen trees?). Plus a whole lot of other stuff. It is hard to know exactly what cave-men did or did not do. However maybe the variation in movement was all the stretching they needed? Can one avoid doing stretching by doing a variety of movements in the gym? Maybe these movements could be done in between the sets of the barbell exercises. For instance one could do walking lunges (stretches hip flexor) in between sets of the overhead press. Maybe one could do indian club exercises (stretches shoulder) in between sets of squats. That way a strength workout could be turned into a strength and mobility workout where the mobility is achieved by doing light "functional" movements instead of stretching.

Mark Rippetoe hates functional training. He argues that strength is not specific to a movement pattern. In his two-factor model of sports performance strength is the fundamental general quality on which sport specific skills are added.
This implies that the best way to get stronger is to use the exercises that involve the most muscle mass over the longest range of motion. Variation in exercises is a bad thing because it means you are using exercises that are not the best. You should only do a few exercises (the best): deadlift, squat, overhead press, bench-press, power clean, bent-over rows and chin-ups. He seems to have a very mechanical (and simplistic) view on how the body works; the brain is in control, it gives orders to the muscles who in turn produce force against the external world e.g. by lifting a barbell. Strength becomes paramount in this view. It is something you can never have too much of. It makes everything easier.

The benchpress is a problematic exercise. It can cause tight pec minors, which in turn only worsen the poor posture with rounded shoulders that many have from prolonged sitting hunched over the keyboard. Matt Wenning has three world records in powerlifting, has never been injured and holds a B.S. in exercise science and a M.S. in biomechanics. He advocates doing a lot of exercises that works the back, such as seated rows, y raises and facepulls to even things out. Worth noting is that he does not seem to share Mark Rippetoe's belief that a few compound barbell exercises are sufficient to stay healthy. Should one perform additional exercises to strengthen the back and even out the "imbalances" caused by prolonged sitting, in addition to the basic barbell exercises?

You can probably do a half sideways split by placing one leg on a chair: 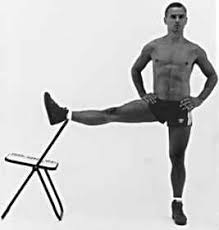 However you can probably not do a full sideways split. Let me tell you; "no muscles run from one leg to the other. No tendons, no ligaments, nothing but skin." (Pavel Tsatsouline) How come then you cannot do a full sideways split? The somatic nervous system (SNS) is why.
Lack of mobility is caused by the SNS not letting you attain a position it deems unsafe. When you stretch you are not making muscles or tendons longer. Instead you instruct the SNS that this is a safe position. If you do not also strengthen in the new position this may be a dangerous thing. Fortunately the SNS is very cautious. What is interesting about this is that it contradicts the simple model where the brain controls the muscles. Instead the body has a "mind" of it own. There is a two-way communication between the SNS and the conscious brain.

Also if the SNS detects tightness it may reduce the power output (starts at 6mins). Personally I have tight hips, which I notice when benchpressing. I therefore warm up the hips by elastic band monster walks and then stretch them before benchpressing.

It seems that Rippetoe's two-factor model fails to take into account these neurological effects. Gray Cook introduced a model where you have one quality that is even more fundamental than strength, and that is movement: 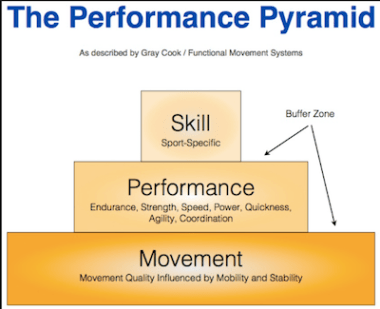 According to this model strength is specific to a movement. Variation and quality of movement therefore becomes paramount. Also it means that you can have too much strength. If your strength exceeds your movement capability you risk injury. Movement can be viewed as the "software" your SNS has. Because of the importance this model attaches to the SNS it seems to accommodate the neurological effects described above. I therefore think it does a better job of modelling reality than Rippetoe's two-factor model. It is important to understand that due to the complex nature of the human body there are no "proofs". We are only really guessing. I think the model we use should be one that takes into account all the "clues" and seem to be able to explain them all. Does this not show that strength and mobility are two connected qualities? Strength requires mobility and mobility requires strength (yin and yang? :-) ).

Starting Strength is based upon a program Bill Starr developed for american football. It seems the Functional Movement Screen is being used and has been used at the NFL combine for several years now. Rippetoe does not seem to be happy with the state of strength training within american football. Should fitness enthusiasts follow the example of professional athletes and vary the exercises they use? For instance one day you may squat, the next do weighted lunges. Maybe Rippetoe is wrong and the majority (?) of world class S&C coaches are right?

If so does this not have huge implications on how ordinary people should train strength? Most people are not world class athletes. However it seems important for everyone to have a good base of movement upon which you add strength. Quoting Gray Cook: “Don’t Put Fitness on Dysfunction”. If you have good posture and mobility this is not a problem. However, many of us who start strength training are not highly functional 18 year old college football players, but instead middle aged office workers who may have poor posture and or mobility issues. Should someone who has bad posture and or poor mobility focus on fixing this before starting on a basic barbell program?

Should fitness enthusiasts follow the example of professional athletes and vary the exercises they use?

No. Strength is muscle to angle specific. A strong shoulder at overhead press will never do a Maltese iron cross if it was never trained for that.

Only train movements and angles you want to be strong at, being a jack of all trades is useless, unoptimal and borderline impossible without steroids.

Should someone who has bad posture and or poor mobility focus on fixing this before starting on a basic barbell program?

Not the answer you're looking for? Browse other questions tagged strength-training starting-strength mobility or ask your own question.

4
How should I train strength if I want to stay pain-free and have good mobility?

6
Elbow movement during Rippetoe Press
0
Chalice Squat Variation - Safe and Effective?
3
Why does Starting Strength prescribe minor resets?
4
How to reduce risk of injury in strength training (when not training at a gym)
6
Are mobility exercises treating the symptom instead of the cause?
0
Best ways to add explosive strength to a barbell training/HIT program?
4
How should I train strength if I want to stay pain-free and have good mobility?
1
Flexibility and Strength training, which muscles is are being trained in this video
3
What is most important for strength: frequency or volume?