So I am working out for around 1 and a half years now, about 1 year ago I started tracking my body fat and my muscle percentage. It both was stable at 14% fat and 44.5% muscle. Last two weeks I noticed, that my body fat was raising extremely fast and my muscle declined (+1% fat, -0.4% muscle). I did not change anything in my plans.

I would say I eat healthy (no junk food, no ready-to-eat meals) and reach my calorie goal every day. My calorie goal is at 2.5k + around 1k a day for all the sports I do ( + 500 cal for gaining muscle, I read that this value should be optimal, but I do not really reach that value daily). As for macro goals I haven't really set some except for Proteins, where it is at around 2 grams/kg bodyweight

Its very frustrating not seeing any progress in over a year and then noticing your body change that much in a negative direction in like 14 days. Do you have any suggestions for me about what I might do wrong?

My workout routine (some of these are translated with google translate. maybe the image can help to understand what I mean): https://imgur.com/a/f2iy4MS

There seem to be two issues at hand: First, your scale gives unexpected readings, second, you can't seem to make progress with your current workout routine.

While I believe the chance is high that these two don't have anything to do with each other, there's the possibility that both are caused by a medical condition:

Doing 2h of sport on 6 days a week while being (full-time?) employed requires special attention for proper recovery. Your routine looks rather intense, and if you are very strict with your calories because you really want to see that BF% go down, I can see how your body could eventually enter a state of overtraining. The weird readings of your scale then would check out, too, as some symptoms of overtraining, such as resting heart rate and increased transpiration could alter the bioelectrical impedance between your feet (i.e. the metric that a body fat scale relies on.) Check out whether you suffer from some or all the usual overtraining symptoms, and if yes, immediately give your body a break and maybe even seek out medical advice from a specialist.

So, let's say you're not suffering from overtraining syndrome and you indeed did not change your dietary plans and workout schedule significantly over the past few weeks. In that case, I wouldn't give much credit to what the scale is telling you: 1% bodyfat equals around two pounds of fat, or around 8000kCal. This means that you would have to consistently exceed your daily calorie goal by 550 kCal for fourteen days. I'm sure you would have noticed.

More likely, something else has changed. Few examples:

The possibilities are endless and personally, I think every one of them is more likely than you accidentally eating a slice of cake everyday for two weeks without noticing.

Let's move to my favourite topic - workout routines. I'll be frank here, I don't think yours is particularly useful, and here's why:

You say that you've been training for one and a half years, but don't see significant progression for one year already. This is typical. Because as an absolute beginner, you already make gains by giving weights a stern look. So you train for a few weeks or months, the numbers on the plates increase, you notice some positive changes in the mirror and thus think that your routine must be effective. 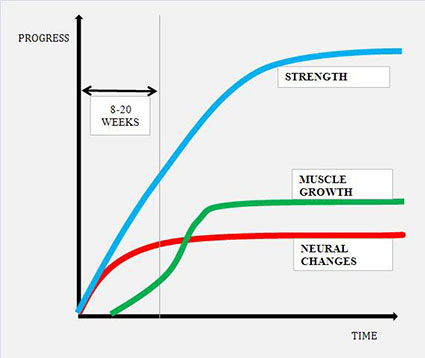 However, those changes are mostly due to an increased neural activation of muscle tissue and a higher resting tone. Those effects cap out rather quickly. And this is where you hit a plateau and your poor routine bites you in the ass.

As someone who wasted a significant time in my life with routines similar to yours (after all, it's the exact kind of routine that gets pushed in the Planet Fitnesses and McFits of the world), I have become a huge fan of linear progression style workouts in the vein of Starting Strenght, with focus on the big movements Squat, Deadlift, Benchpress (and Overhead press). Well, you're already hitting the gym 5-6 times a week, so the usual three-day schedule of Starting Strength, Ice Cream Fitness, Greyskull LP, Stronglifts 5x5,... might not be enough for you.

Therefore, I'd like to direct you towards the Candito Linear Program from competitive powerlifter Jonnie Candito. The program is dedicated to beginners and is a four-day upper-lower split with one heavy and one technique day for each muscle group. Variations are provided to focus on technique, on power movements and on hypertrophy. The other two days you could fill with some functional training, yoga, some team sports... or just resting as you see fit.

Oh, and don't be fooled by the words 'powerlifting' or 'strength training'. The whole "hypertrophy rep range vs. strength rep range" is mostly a false dichotomy when it comes to novice and intermediate trainees.

Not the answer you're looking for? Browse other questions tagged fat muscle-loss or ask your own question.

0
Gaining without workout
1
How is energy derived from muscle, fat and glucose at different intensities?
13
Information overload makes me unsure of how to lose fat weight
0
losing side and back fat
4
Can you aggressively lose fat and maintain muscle?
1
How do I lose muscle and fat in my thighs?
1
Does losing 6kg weight and 2.5kg body fat mean you've lost 3.5kg of muscle?
2
How to calculate muscle loss during weight loss from body fat over time?