In reality, does the correlation go both ways? That is "increasing muscular endurance make you stronger"?

There are many 1RM equations. Brzycki is one of these:

Different intent and style of training but same result?

Of course training at higher rep ranges is useful to some degree for developing strength. Everyone agrees that it's important to build muscle and to have at least some base level of muscular endurance, even if only to be able to do a sufficient number of low-rep sets in training. Even weightlifters and powerlifters, who train exclusively for the goal of demonstrating strength in a single effort*, use complexes and higher-rep sets to condition and build muscle.

* Of course, powerlifting competitions actually involve nine lifts, and weightlifting six — and weightlifting's clean-and-jerk requires a three-step effort (pull/squat/jerk), so even then in these extreme domains it's not entirely a single effort.

But some adaptations are more general than others. Improving my 20-rep squat is great, and useful, and tremendous for athletic development across multiple dimensions: conditioning, mental focus, muscle growth, ingraining form, toughening non-muscular soft tissue, improving muscular endurance, and for many people (including nearly all beginners) it will improve their squat one-rep max. So if a set of 20 squats improves your one-rep max, then yes you should be doing sets of 20 squats.

But an untrained person can improve their squat one-rep max by doing push-ups, too, because weak and de-conditioned people's bodies respond to nearly any athletic stimulus! So why not do push-ups to get your squat 1RM up?

Because push-ups quickly stop improving your squat. General stimuli cause general adaptation, but it's not long before you need specific adaptation. This holds true for the relationship between high-rep squats and your squat 1RM: it will improve things up to a point, but its contributions taper off. Building muscle remains important but muscular endurance stops being an obstacle. Then the directional difference in the relationship becomes clear: working on your 20RM will improve the proportion of your 1RM that you can do for reps, but your 1RM will stop moving.

The other direction stands in contrast: because one's 1RM is by definition a ceiling for higher rep maxes, increasing your 1RM makes higher rep maxes possible that would otherwise not be. One can always try to make their 2+RM a greater proportion of their 1RM. The opposite is harder: your 1RM will stop going up if you train only in high rep ranges.

Thus the most common recommendation is for beginners to start with 20-rep squats (because it will develop all their athletic qualities) and after a few months to switch to sets of 5, and then to lower-rep sets when sets of 5 stop making increases in weight possible. This is clear and even obvious to folks who have seriously tried to drive their strength up.

Increasing muscular endurance only makes you somewhat stronger. Increasing strength on the other hand also increases endurance. So no the correlation does not go both ways.

The reason for this is: 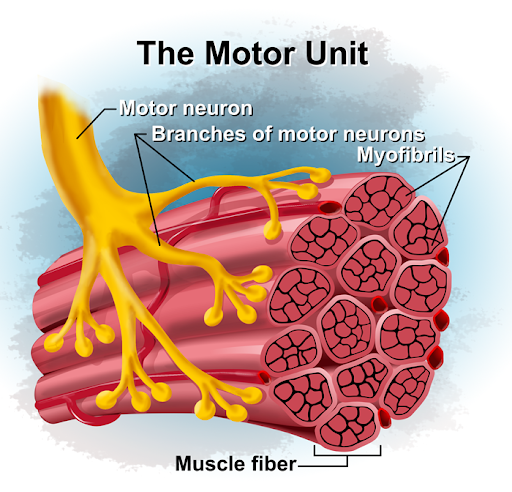 All motor units in a muscle receives the same electrical signal from the brain. The smaller motor unit only requires a weak electrical signal to engage. They contain only type I fibers: slow enduring. The larger motor units requires a stronger electrical signal to engage. They contain mostly only type II fibers: fast and strong but not enduring. When a motor unit engage all muscle fibers in that motor unit contract. The brain starts by sending a weak electrical signal first. This recruits only the smallest motor units and therefore only a small force is generated. It then increases the strength of the electrical signal gradually (but very fast) and more and more motor units are recruited and more and more force is generated. It does this until the produced force matches the requirements. This wonderful mechanism enables the same muscles that can be used to lift heavy weights to eg. perform brain surgery. As mentioned the motor units are recruited from the smallest to the largest based on the force demands placed on the muscle. This is Henneman's size principle. It has been verified in experiments using EMG measurements of muscle activity. It is therefore a scientific fact and not a postulate. 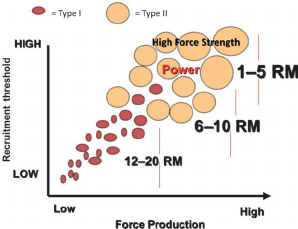 Also note that even though the size principle shows that the causality must be stronger from strength to endurance than the other way, this does not mean that the causality does not break down at sufficiently large reps. And it does. I am pretty sure that doing backsquat sets of 5 or less alone does not enable you to a 100 bodyweight squats in row. No matter how large your 1RM backsquat becomes. If you need to do 100 bodyweight squats in a row you should probably also train with many repetitions and high volume ala the hundredpushups program. In order to really understand why we would have to take an in depth look at the specific adaptions caused by endurance training. Probably endurance training cause more efficient generation and use of energy and oxygen in muscle cells.

Not the answer you're looking for? Browse other questions tagged weightlifting strength-training or ask your own question.

6
Importance of conditioning for weightlifting

8
Is there an alternative way to warm up for lifts that is less tedious than gradually increasing the set weight?
8
What's the ideal way to maintain my deadlift with minimal recovery demands?
3
Training load on a diet (am I doing too much?)
6
How to Alternate Starting Strength and Running/Jogging
0
How to get stronger without increasing fitness?
12
Recommendations for a new beginner training program
0
Using only one arm/leg on machines?
7
How can I use kettlebell and dumbell training at home to minimize time in the gym?