How is isometric strength physiologically different than isotonic?

While doing one type of exercise clearly helps in the other, there are people who are clearly stronger in one over the other.

Arm wrestlers tell me that their incredible static strength comes from stronger tendons. This doesn't make sense to me, since tendons are only a part of the chain. I believe there must be something different in the musculature, but aside from bigger muscles I have no idea how. One of the answers to this quetion says

Isometric contraction work outs major downfall is they only train the range of motion you are using (90º for example). This means if you wanted to have the same "grocery lifting" strength anywhere else in your range of motion you would have to move to that angle and train that portion (45º). You would then be less strong at all other angles than 45º and 90º.

So somehow the muscle is stronger at different levels of contraction. Clearly something more is happening here than just bulkier muscles, or else different angles wouldn't affect it. What is happening, then?

The difference between the two scenarios you describe is the result of a number of phenomena.

However, it is equally likely that you are observing differences in the individuals' physiology and training. Athletes who have a predominance of Type I (slow oxidative) muscle fibres have far greater resistance to fatigue than those with a predominance of Type II (fast glycolytic). This distinction is believed to be entirely genetic. Strength-endurance training can alter Type II fibres to become intermediate (Type II A and AB), but we are otherwise slaves to our genetics in this regard.

We do, however, alter our strength characteristics markedly through training, most notably (in this context) through two mechanisms: hypertrophy and neuro-muscular (motor unit) development. The former involves the thickening of muscle fibres, and it occurs in both/all muscle fibre types, albeit to a greater degree in Type II fibres. The latter involves the development of motor neuron-muscle fibre bundles that influence all of the characteristics of muscular output—control, strength, speed, power, and endurance.

Finally, skeletal geometry also makes a huge difference to the ease or difficulty by which an individual can apply force to a load. Shorter bio-mechanical levers combined with variations in muscle tendon attachment points, which alter the mechanical advantage of the lever give, with all other things being equal, shorter and stockier individuals a huge strength advantage. Essentially, such individuals can exert greater strength with the same muscular tension. 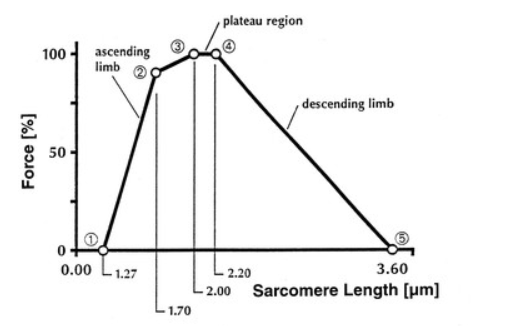 The best way I can explain how a muscle contract is if you think of muscle kinda like a line of people pulling a rope. Picture a bunch of people pulling a rope without the people moving. Each person is in line, and they pulls the rope closer, and the rope moves along from person to person. That's kinda how muscles contract. When your muscle is fully stretched out, this is equivalent to say the end of the rope only being in reach of the first person. He picks it up and starts pulling it until eventually the person behind can also grab and start pulling as well. As more and more people pull on the rope at the same time, the strength at which the rope is being pulled increases. Same thing with muscle. There's actually an optimal length at which the muscle is the strongest.

I don't know if that analogy makes sense, but if you wanna read about it yourself, look up the sliding filament theory and maybe it will make more sense to you.

Also, another factor to take into account is fatigue ability of muscles. Certain muscles are more prone to fatigue then others. So they won't be able to maintain a constant tension as long as other muscles.

So to answer your question, on a physiological level, the muscular contraction is the same no matter what type of contraction is happening (whether its isometric, isotonic, eccentric or concentric). whenever you lift weights, your muscles are generating just enough force to overcome gravity and not more.

your question is more of a biomechanics question, not a physiological one. Theres a tradeoff between speed and force. What that means is that if your muscles are contracting at a high speed, the force that the muscle is able to produce is low. if your muscle is contracting at a low speed, the force being produced is fast. so in an isometric contraction (i.e one in which muscle stays in constant length, meaning the object is not moving) you will be able to generate more force than during a concentric contraction.

Does this help answer your question?

Not the answer you're looking for? Browse other questions tagged isometric or ask your own question.

7
How does isometric strength relate to isotonic strength?

7
How does isometric strength relate to isotonic strength?