What can I do to stop losing my sleep for several days after a HIIT?

I'm already reaching my forties and I'm a software developer, not very fit.

I do workout with some regularity but never exert myself too much. There are days when I do some HIIT though. I have noticed a pattern that causes me to lose sleep for several after a strenuous session. I have heard it has something to do with cortisol levels, but seemingly none of the guys I know are affected so much by this. I have had this problem since years, is there any reason my cortisol levels are high for so long? How can I minimize the time my sleep is affected by high cortisol levels?

Is there any way to build up a natural resistance to this, or to regulate the cortisol produced during a workout?

sleep hiit stress
Share
Improve this question
asked May 4 '20 at 14:10

Your cortisol levels only raise temporarily, so if you workout before 3pm-ish, your cortisol levels should lower by the time you go to bed. Cortisol keeps you awake, and stress causes cortisol increases. Cortisol can also spike with an intense workout. So if working out before 3pm doesn't solve your issue, you can also look at ways to reduce your stress or reduce the intensity of your workout. If you're pretty out of shape and doing HIIT multiple times a week it might be too much for your "newbie" body to handle. HIIT, whether you are physically capable of doing it or not, is NOT a beginner exercise.. your nervous system can't handle it. That being said, Id try working out in the morning first.

As others have mostly mentioned: - try to workout earlier, in the morning - stretch before bed to relax your muscles and reduce stress - switch to a different exercise routine: cardio (LISS), weightlifting, sports - have sex at night - consider other factors that could lead to insomnia/sleep loss, ie: caffeine, diet, stress.

Know that this may be natural as your body is trying to adapt to a new routine. Get a health checkup if the issue persists.

Strenuous workouts can deplete the glycogen stores in the muscles. Since the muscles need glycogen as energy, cortisol is produced. The cortisol speeds up the process of refueling the muscles with glycogen (by increasing the blood sugar).

As Ace Cabbie mentions it can take many hours for the cortisol levels to come down. In a study of 20 young men running a fast 5 km before breakfast one day compared to a rest day, they found that it took approximately 6 hours for cortisol to decrease to normal levels: 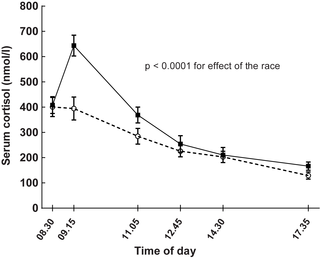 As mentioned the increase in cortisol results in increased blood sugar: 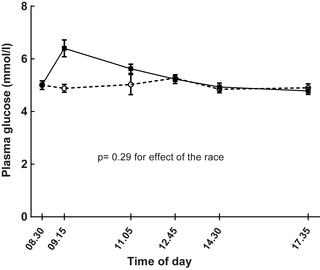 If your issues with sleep is caused by too high cortisol levels the best thing you can do is probably to workout as early as possible in the day (but not fasted).

Another solution could be to try to avoid depleting the glycogen. You could workout less intense or for shorter duration. Instead you could work out on more days.

Eating carbs causes an increase in insulin. Since insulin and cortisol are antagonists this will reduce cortisol. Therefore you should eat a meal rich in whole carbs immediately after working out. Also a low-carb diet is problematic with respect to cortisol. This study on 7 men on either a 10 day high protein-low carb or a 10 day high carb-low protein diet (sum of calories being equal) found that cortisol levels was approximately 50% higher on the low carb diet. The reason for this is that a low-carb diet leads to smaller and easier to deplete glycogen stores in the muscles. Therefore you should also consume carbs before your workout. This article advice to center carbs around workouts if you are on a low-carb diet.

This article discusses further some nutritional strategies to avoid this problem.

The body has 3 energy systems:

You could try to workout more in the two other energy systems, since these do not increase cortisol. That is do less HIIT, do some walking and or lift some weights. Weight training is also a effective way to reduce bodyfat. The body spends a lot of energy rebuilding the muscles and increased muscle mass leads to increased energy expenditure.

Try not to do anything like HIIT in the evening, as it can interrupt sleep patterns

Also don't do just the HIIT but combine it will other exercise. Consider more complete and lest taxing practices , that don't interfere with sleep such as tai chi and yoga

Not the answer you're looking for? Browse other questions tagged sleep hiit stress or ask your own question.

12
Can I workout six days a week with only 6 hours of sleep a night?
19
For better muscle growth, how many hours' sleep are recommended after doing a workout?
13
What is the best time of the day for High Intensity Interval Training (HIIT)?
4
What is the optimal sleep schedule for bodybuilding?
1
What work/rest timings should I use for my HIIT workouts?
2
Biochemistry of working out while under psychosocial stress
3
What is the difference between rest and sleep? Can inactivity replace sleep?
2
what kinds of HIIT do/can you do on the treadmill
5
When doing HIIT, should one be aiming for maximal effort, or maximal effort that can be supported over the time period?