Does drinking water during a workout really help me?

I used to do a lot of long distance running but have since switch to biking for lower impact but when I ran I would never carry water even on hot summer days doing long, hard runs and have kept this habit through my biking.

Now I am not one to drink very much water in general but it was always emphasized by my trainers that if you wanted to be hydrated for a race, most of your hydration was done 12 to 24 hr before the race and chugging water right before won't do you any good. So to me this begs the question;

Does drinking water during my workout actually benefit me or is it more of a comfort thing?

Also I have referenced this post but didn't quite answer the question and it is worth noting that I don't crave water during workouts like it seems a lot of people do. Any advice on this would be handy.

There is no doubt that hypohydration negatively affects performance, both independently of thirst and independently of knowledge of our hydration status. Recent blind studies (here, here, here, and here) confirm the results of earlier research, whilst addressing its proposed methodological issues. There has long been, and remains, considerable question about the precise mechanics behind the loss of performance observed, with cardiovascular, metabolic, neuromuscular, and temperature regulatory factors being considered. The latter remains the prominent theory due to our knowledge of the relationship between core temperature and muscular exhaustion, but it is likely a combination of all of those factors.

We begin to feel thirst only once our dehydration has reached around 2% of our body mass. By that time, the data suggest that we have already lost approximately 10% potential power output. And by the time we have lost 5% of our body mass, our performance has suffered by more than 30%! There exists variation between the differences of mean and peak power output, as well as between different studies. However, the trend is clear. It is recommended, therefore, that hydration be programmed or otherwise done ad libitum to match fluid losses. And this has become standard practice amongst elite athletes in all endurance sports. 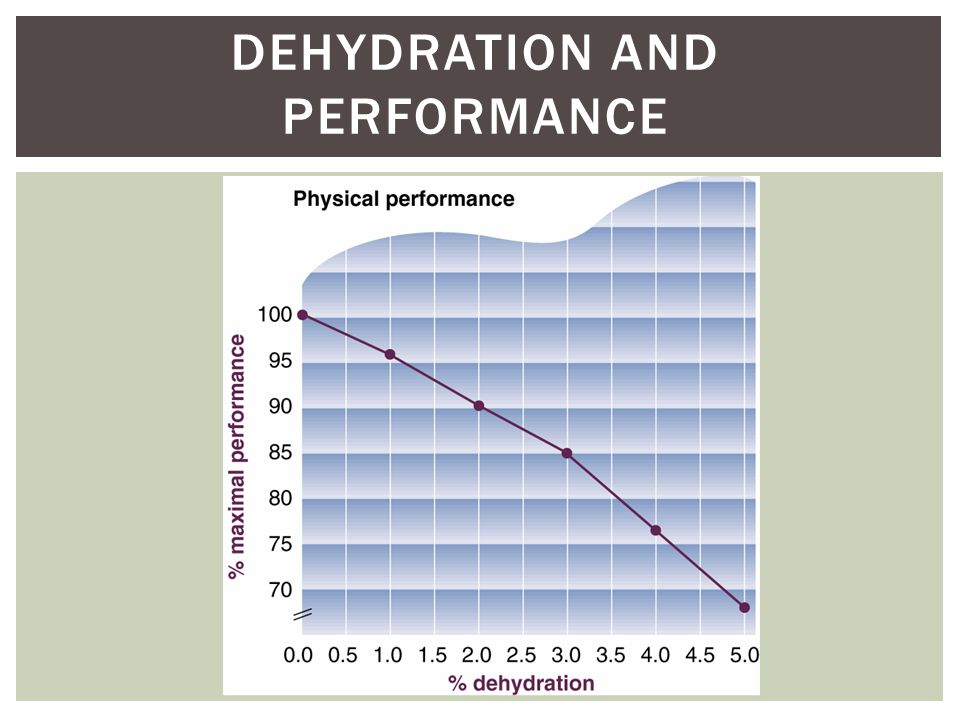 Rates of dehydration vary enormously based upon the individual, their physical output, and environmental conditions. One of the easiest and most practical ways of monitoring this is by calculating our own sweat rates during different exercise bouts. (These rates will vary with the type of exercise we are performing, typically being the greatest with those in which we are most proficient.) This is done by taking our scale mass immediately before and after the bout of exercise, and monitoring our total fluid intake during the course of the bout.

Typical values range between about 0.5-3.0 litres per hour. Ideally, we would replace our fluid loss with at least the same quantity being lost, gradually and at intervals during the course of the bout.

I hope that is clear and helpful.

You're asking a seemingly straightforward question, and most people would probably imagine that it had a well-known answer. The reality is that this sort of thing is controversial and difficult to test scientifically. Historically, there have been all kinds of varying and inconsistent scientific claims about the need to drink fluids during endurance sports. A lot of the perceived need to take fluids during exercise is basically the result of advertising that started when Gatorade was introduced.

Studies with large samples of athletes in real-world conditions have found that post-race body temperatures were not reduced by drinking more water (Noakes et al., "The danger of an inadequate water intake during prolonged exercise," European Journal of Applied Physiology and Occupational Physiology 57 (1988) 210).

Here is a nice article written for EMTs that references a lot of interesting scientific papers. Some studies have found that people who won running races were likely to be the ones who tested as being more dehydrated at the end. Evidence does not seem to support the notion that fluids protect against heat stroke. Pop culture has convinced many people that they should drink huge amounts of fluids, and in some cases this leads to hyponatremia, which is extremely dangerous.

Fatigue is a very complicated physiological phenomenon that is not well understood and includes a huge component from the central nervous system. There are various scientific models to try to explain observations about fatigue, but a lot of the underlying mechanisms are still not known.

For endurance sports in the hot temperatures you describe, you should be careful about heat stroke, which is really dangerous and insidious. It affects your brain, so you may not realize anything is wrong, and then you die. As described in the emsworld.com article, hydration won't protect you. Basically you can do two things: (1) not do the activity if it's too hot, and (2) be with someone else who will be able to tell if you start acting loopy, stumbling, etc., and take appropriate action.

18
Should I drink water during my workout?

4
Reduce water consumption during race
1
How do I keep my body well hydrated?
0
How to keep my leg muscle from increasing in volume while still exercising?
1
Upper groin hurts when riding stationary bike (Experienced cyclist)
3
Sub 1:30 Half Marathon in 36 Weeks
3
Summer running is slow. Am I getting slower because of this?
4
How and why should I use walking breaks for running long distances?