Does "Greasing the groove" work and if so why?

"Greasing the groove (GtG) is doing approximately half the number of repetitions that you are capable of, with 15 or more minutes of rest in between, troughout the day, every day, with an occasional day of". Pavel describing this. Here he mentions doing 2 reps when one could have done 4.

However this article mentions using it for push-ups. Sounds like what is done in the military where you have to do 10 push-ups (when you can do 20) many times a day. A problem with this is that according to Henneman's size principle one must come close to failure on every set in order to recruit all motor units. The last 5 reps from failure makes sure all motor units are recruited. When you are only doing 10 push-ups where you could have done 20; muscle fibers that accounts for 25 % of your strength are not trained. That could mean that if you do huge amounts of push-ups you can do more push-ups but you are not getting stronger. However this mini study comparing GtG and another training method called Density for improving reps of push-ups and pull-ups simultaneously found that GtG worked very well and better than Density, at least for 3.5 weeks. From the data GtG seems to work for everyone but especially in the more technical exercise of pull-ups and especially for people who can not yet do many pull-ups: 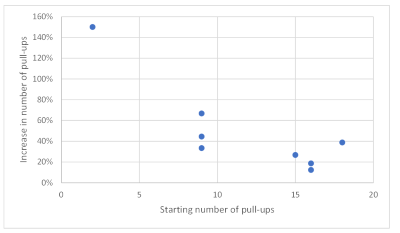 This seems to indicate that increase in skills is partially why GtG works.

In this video Pavel explains that GtG makes your nerves become "superconductors" possibly trough synaptic facilitation or myelination. This article explains myelination as "a fatty white substance forms a sheath around the axons of nerve cells that allows the nerve impulse to move more quickly." Sounds good. However same article also mentions: "There’s little to no carry over in benefits to other exercises. So if you grease the groove with pull-ups, you’ll notice an improvement on the number of overall pull-ups you can do, but you won’t see much of an improvement in other exercises." This is not good and seems to contradict the theory that your nerves become "superconductors". If the nerves troughly became "superconductors" there would be a huge carry over since the nerves do not care if you do pull-ups or deadlifts.

Some exercises such as the pull-up has a huge skill component. I wonder if GtG has little to do with improving the efficiency of the neural signalpaths, but instead works by learning the skill faster trough frequent repetition. If so it makes GtG less great since the "strength" (in fact skill) you acquire does not have carryover.

Your general analysis of the approach and its claims seem pretty accurate.

Without direct evidence supporting such claims, we can fairly take them with a grain of salt. The term “superconductor” is clearly being used as psuedo-scientific jargon (unless, of course, Pavel is suggesting that he has observed true superconductivity at room temperature). And the rest, I gather, is pure conjecture.

Has the method been subject to any kind of academic study? If not, we should look at it in the same way we might look at any trademark. That is, the term Greasing the Groove is suggestive of what it is: a self-promotional sales gimmick. But that does not suggest, necessarily, that there is no value to it—only that we may not have any clear evidence that it works, let alone how it works.

I agree. It is just high-frequency training. However, what Thibaudeau is probably describing is neural fatigue, and this is why commentators (Bompa and others) recommend periodising strength training to allow the nervous system time to recover.

I personally disagree both with Thibaudeau and Bompa. Essentially, the criticism of high-frequency training that is being made by Thibaudeau is analogous to the criticisms of overload that Bompa has made throughout his career to justify periodisation. The problem with each, I believe, is that there is an underlying assumption about with what volume and frequency we should train. And thus, when the body fails to keep up with the workload placed on it, those commentators are dismissing the methodology rather than recognising the importance (and difficulty in achieving) the work-recovery balance.

It is worth noting that high-frequency training has its origins in the Eastern Bloc at the time of its dominance, and it remains a staple amongst weightlifters and other world-class strength athletes.

A problem with this is that according to Henneman's size principle one must come close to failure on every set in order to recruit all motor units. The last 5 reps from failure makes sure all motor units are recruited.

That is only true, I believe, when examining any particular set. That is, if we were to perform just one set with such protocol, I think such a criticism would be entirely reasonable. However, we do not; we perform many sets, regularly, punctuated by relatively short periods of rest. And although we have rested, that does not imply that our motor units have fully recovered. Thus, rotation is guaranteed through repetition at high frequency.

I am not aware of any specific research on the topic, but given the effectiveness of the method itself, I think that in the absence of conclusive evidence one way or the other, it is reasonable to assume that such abstraction of the theory holds.

If the nerves truly became "superconductors" there would be a huge carry over since the nerves do not care if you do pull-ups or dead lifts.

Neural development is highly specific, and even the orientation of the body can alter its ability to repeat a skill. However, you are correct in suggesting that there would be a degree of skill transfer to other similar exercises—the more similar the exercise, the greater transfer. Thus, pull-ups will never improve the performance of dead lifts significantly—they are entirely different even mechanically and muscularly—but they will improve the different variations of rows to some degree.

Some exercises such as the pull-up has a huge skill component. I wonder if GtG has little to do with improving the efficiency of the neural signal paths, but instead works by learning the skill faster through frequent repetition.

Yes, frequent repetition does improve strength through skill learning and coordination. Indeed, early/novice strength development has been shown primarily to be a function of neural (skill) development, with hypertrophy playing a far lesser part. However this, like everything, is subject to limitations. As the movement is perfected, the benefits of practice alone has diminishing returns.

Due to the extreme level of skill required of their sport, Olympic weightlifters continue to practice their lifts throughout their careers—the tiniest deviation from the ideal often meaning the difference between a world record and a failed lift. By contrast, most developmental exercises are far less complex, and are generally mastered within 3-6 months.

So in summary, by its first interpretation, Greasing the Groove should be seen as synonymous with high-frequency training, and thus can be expected to be just as effective, since it delays central nervous system fatigue and excessive muscle damage, and hence permits greater neural development. But by its second interpretation, we should only expect gains with for novice athletes, or with extremely complex movements.

I hope that is thought-provoking.

this answer is only an anecdote

Greasing the groove as a concept sounds great but the only time it worked was when implementing it into learning and not training.

I had more success learning foreign languages by splitting my studies across the day, but I believe this is mostly because I was accumulating more hours in total and results might have been similar with a different system but weekly hours of study remained the same.

As for training, I never found any use to it for specific reasons.

When doing one exercise at random points I wasn't actually doing that much work but I ended up doing maybe 4 or 5 sets extra daily and this made no difference considering i had the strength to do all those total repetitions in 2 sets only.

I also tried setting an alarm every 20 minutes for 10 hours, and it was working but at this point it was not greasing the grove but only a deload workout with long rest days.

In my eyes it seems useless for everything except learning, maybe it might grant faster results for people who seek to learn complex gymnastic movements like the manna, victorian or double standing backflips since such things have more to do with the brain than the muscle.

My understanding of GtG was in regards to the amount of volume you can cram into a day with proper rest times inbetween - 2 hours of rest inbetween say a strict press or front racked squat. While less science and more mental, the school of strength is big on never training to failure. If you train to failure you train the brain to fail. If you don't train to failure your brain doesn't associate a failed lift with a certain weight. Example - someone training for the 5 rep 24kg (if that's your weight class) SFG1 strict press does 2 presses per side every 2 hours 8 times in the day. That's now 16 successful reps performed throughout the day. The person in question has now performed 3x the 5 reps and is mentally ok with the weight.

Not the answer you're looking for? Browse other questions tagged strength muscle-growth or ask your own question.

3
What is most important for strength: frequency or volume?

6
Exercise for shoulders strength with no special equipment
5
What is the simplest way to measure strength?
9
How do I know if I'm training too hard?
2
combining Greasing the Groove with regular strength workout
10
How does superhuman strength work?
5
How long would the training plan from this answer take to get to the level wanted in the question?
0
What does "genetic potential" really mean? Does it really mean anything?
1
Rep Range Cycling Daily, Weekly, or more
5
Can I increase flexibility by strengthening muscles?
3
Proper way to start exercising after long gap