When I first started training, I did not know how to kip. I had no clue how it worked. People said it was instinctive, and that everyone knows how to kip without training it. Well—I don't!

How does kipping work? And why does everyone feel it makes exercises easier?

For example, shouldn't a kipping muscle-up require greater strength than a normal clean muscle-up? When you kip up, your arms need to balance you so that you don't swing around at random. By contrast, when you do a muscle up without kipping, you are already in a stable position. The arms only have to work on moving you up and down, and there's no need for balance.

So if jump squats are harder than normal squats, why are kip-up pull-ups not harder than clean pull-ups?

It should be understood that unlike squats and jump-squats, pull-ups and kip-ups are two distinct exercises. Yes, they both elevate the chest to the bar, but the mechanics and muscular activity in performing that movement are entirely different. And it is this difference that makes kip-ups muscularly easier to perform, but technically more difficult.

Consider the 12 frames below, which illustrate an athlete's performing the full cycle of a kip-up. 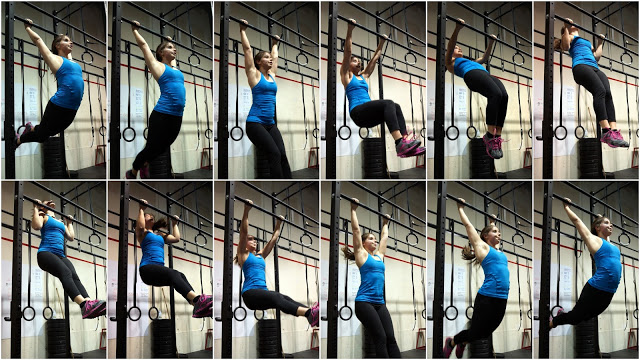 From Frame 1 in the top left corner, the athlete begins with hyperflexion of the shoulders, hyperextension of the spine and hip, and flexion of the knee. (Of course, this is a dynamic posture, which can only be achieved after swinging.) Her centre-of-mass, which lies posterior to the navel, is forward, thereby creating a moment around the pivot point—the bar.

At this time, she engages the pectorals (pectoralis major), abdominals, (rectus abdominis and external obliques), hip flexors (iliopsoas, tensor fascia latae, and rectus femoris), and knee extensors (remaining quadriceps femoris), simultaneously accelerating her centre-of-mass backwards and central mass (that is, the mass of the torso) backwards relative to the mass of her periphery (arms and legs).

Once directly underneath the bar (between Frames 3 and 4), she flexes the hips and knees, raising her centre-of-mass. This is an important step, since the body is essentially elevated without exertion from the arms. The swinging moment elevates the body further, and shifts its mass behind the bar. Towards the end of the swing, the body is entirely realigned such that the bar is forward of the chest, and at little more than forearms' length. See Frame 5.

From here, she pulls backward and slightly downward (Frames 5 and 6) relative to the alignment of her body, simultaneously kicking outward—that is, extending the hips and knees—in order to employ the momentum conserved in her legs to help lift the torso. The pull, itself, is more akin to a t-bar row than a pull-up.

The kip-up is a dynamic, functional exercise—its function being to lift the chest to the bar efficiently and by any means necessary. And it employs mechanics, as described above, to do this with minimal effort from any single muscle group. This is why it is ‘easier’, per se. However, whilst the lats (latissimus dorsi) and biceps (biceps brachii, brachialis, brachioradialis) are activated less in a kip-up than they are in a clean pull-up, activation of the abdominals (rectus abdominis and external obliques) and hip flexors (iliopsoas and tensor fascia latae) are greater.

By contrast, the clean pull-up is intended for pure (isolated) strength development and demonstration.

As always, the choice between these exercises comes down to fitness for purpose. What are we trying to achieve, and why? If we want to be able to pull ourselves up to, or above, a bar using full-body athleticism, a kip-up is a more appropriate exercise. However, if we want to develop muscle mass and raw muscle strength, a clean pull-up is more appropriate.

The short answer is that "kipping" for a muscle-up may involve more overall muscular effort, but detracts from the area you wish to train. If your goal is to perform a single muscle-up (say, just so that you can start when you can't even do one, or because you need to do one in the field because you have wild dingos biting at your heels), then there's some virtue to it because your only goal is to get up. When you're doing it as an exercise goal, however, you're sabotaging yourself because the goal of the exercise is to train specific parts of your upper body to get stronger, but you are, instead, using other parts of your body to bypass the exercise in question.

So someone doing "kip up" muscle-ups is basically training for the (as you admit) less efficient movement rather than training their body to do the proper, more efficient, movement. If the goal is to just get it done, then you're there. If the goal is to learn to move efficiently, it's counter-productive.

To use another movement dear to my heart, when I started training spinning kicks in Capoeira, I'd wind up my arms to make my leg movement faster, which let me do the complete kick at a reasonable speed. With better training, I now only move my arms in a way that properly guides the kick, which means I can do multiple spinning kicks with precision, and with less effort, although I now know that I have the option to do larger arm movements if I need to adjust my balance, or perform the kick at a different speed than when I started launching it.

Not the answer you're looking for? Browse other questions tagged exercise-technique biomechanics or ask your own question.

22
How do I avoid straining neck muscles when doing pull ups?
7
Is engaging your core really about posture?
12
Adding power to my pull-ups?
2
How far can you go with eccentric body exercises?
1
Why does one swing the arms backwards in a Hindu Squat?
1
Underhand press ups
6
Going on your toes when doing landmine squats or thrusters
4
Why are chin-ups harder than pull-ups?
3
Power Clean Form Check (and technique questions)