Back lever, what muscles does it work?

So back levers are kind of basic bodyweight exercises, not to the level of doing a push... Where most people who never trained in their entire life can still pull off a few push ups...but usually only people who have an history of playing various sports can do a back lever on first try.

So it's not the easiest movement ever but doesn't look impressive and doesn't require an impressive strength to pull off.

Some suggest that the back lever trains the shoulders and chest.

But I think it doesn't happen, I believe the chest and shoulders are literally at rest when holding a back lever because if one has any level of latissumus dorsi developed the lats, their size and volume will get in the way and will work like scaffolding where the arms rest in that position blocking the body from falling down.

So the effort of back levers come from the spinal muscles keeping the torso in a straight line and not the chest or deltoids.

At least this is how I explain that many people including me can hold a back lever for really long without having ever trained for it. Because wide lats block the body from falling down, but beginner athletes who want to train the back lever struggle to achieve it because they lack the size on their backs.

Is that the case or am I missing some really important details here? Maybe the lats don't really work as scaffolding because they block the arms but maybe it comes natural to people with wide backs to use this method? But sincerily I know no way to tuck my back in and make it thinier.

For any readers who don't know what a back lever is, here's an image from Wikipedia. 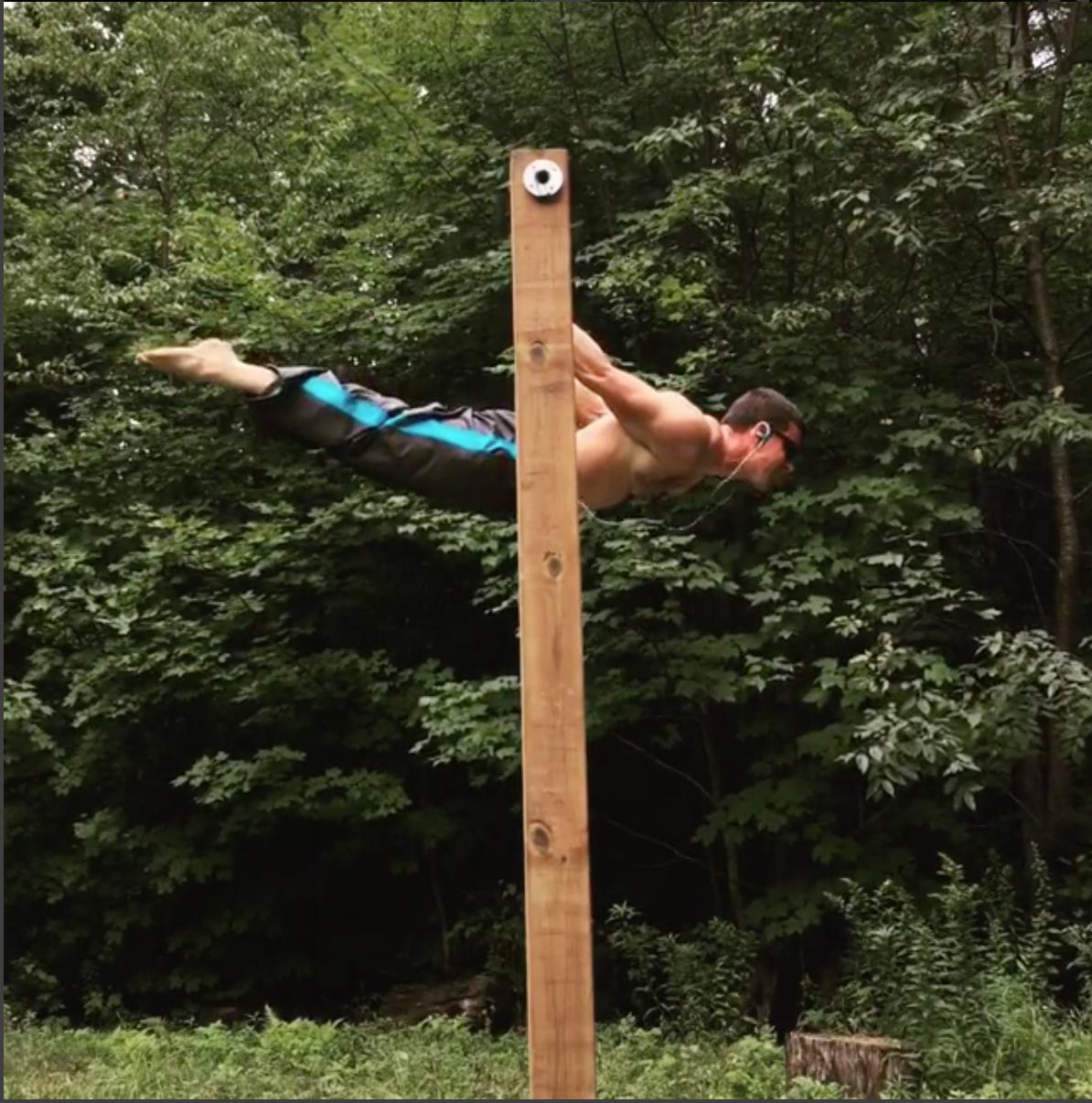 In its most basic form, you simply hold this pose statically.

I believe the chest and shoulders are literally at rest when holding a back lever because if one has any level of latissumus dorsi developed the lats, their size and volume will get in the way and will work like scaffolding where the arms rest in that position blocking the body from falling down

I would disagree with this. The back lever is quite a chest-intensive position, because your arms are being pulled backwards (relative to your body), and you need to engage the chest and front delts to pull your arms forward to keep from collapsing.

In order to train for this movement, you can lay on a high bench with a couple heavy dumbbells in your hands, and lower the weights to below the bench, and try to pull the dumbbells back up in a sort of front raise movement with almost straight arms. Almost like a fly, but instead of sending the arms out away from you, you raise the arms along, and close to your torso. The weights should come up to bench level near your hips.

This is true. It certainly requires a decent amount of core strength - spinal erectors and glutes included - in order to maintain a straight posture. But that's not to say that this is mutually exclusive with the muscles required to stay attached to the bar, and keeping a static position between the bar and torso.

It's nice to think of this move as a two-parter in that sense. Keeping the chest in a static position relative to the bar (chest and shoulders), and keeping the body straight (core, back, glutes).

Because wide lats block the body from falling down

That's an interesting take. I suppose if you have well-developed lats, it would have an effect on how this "fly" is performed, since the arms will be travelling along the side of the torso. Large lats are known to be a colliding factor in exercises that do this. That said, I don't think it trivializes chest engagement, unless the lats are so large and firm that they act as straight-up walls that you can lock your elbows behind. But again, that's an interesting view. I'd love to see someone with particularly developed lats do this.

In examining any posture, it helps to imagine what would happen if there were no muscles or fasciaeŌĆöthat is, in this case, if there were just a skeleton hanging in a prone position with its arms held laterally and posterior to the spine, with the spine hyperextended, and legs held straight. We can thereby ask ourselves, what would happen to the skeleton?

The centre-of-mass of the body, which typically lies around the navel would immediately cause the humerus to hyperextend, extend/abduct horizontally, and externally rotateŌĆöand it would cause the shoulder girdle to retract and elevate. The spine would flex, and the mass of the lower extremities would further cause the hips to flex and pelvis to tilt posteriorly.

It follows, therefore, that the muscles involved are the humeral flexors and horizontal flexors/adductors (pectoralis major, anterior deltoid, and biceps brachii); the shoulder girdle protractors and depressors (serratus anterior and pectoralis minor); the spinal extensors, which also tilt the pelvis anteriorly (erector spinae); and the hip extensors (gluteals and hamstrings).

The body cannot ŌĆśrestŌĆÖ on the muscles as you have hypothesised, but in such a stretched position, it is assisted by passive tension of the structuresŌĆöin particular, elastic tension held in the highly-elongated humeral flexors and horizontal flexors/adductors. The bulk of the latissimus dorsi could theoretically offer some support, but such support would be negligible since its fibres and fasciae are positioned at the posterior of the torso. It could , however, potentially contribute some active and passive tension from such a hyperextended position.

6
Should I train all muscles or concentrate on some muscles in each session?
4
Workout Split - what's a good 4 day split routine
3
Does it affect one's stamina to take a long break from gym?
0
How to tone without losing or gaining weight
1
Rest time and training other muscles
1
Exercises to reduce waist width
0
Working Biceps and Triceps the next day after Chest and Back
2
Leg Exercise Volume being way higher compared to Upper Body?
1
Beginner work out routine review & questions