I have started my fitness journey a month ago, by not drinking sodas any more and after that I have started to add more exercises to my life and a bit healthier diet. I have started to lose some weight (orange on the picture), but suddenly one morning my body fat percentage (green line) jumped from 25.8 (at 82.9kg) to 30.8 (at 83.2k) compared to previous morning and stayed above 30% ever since. I bought my scale in april and nothing seems to be broken and the weight is seemingly being shown correctly.

EDIT: The answer to how is this possible is that the scale at some point changed settings to a woman, after setting them back to a man, it shows again values around 25%. So why does the same weight shows body fat % different for men and women? 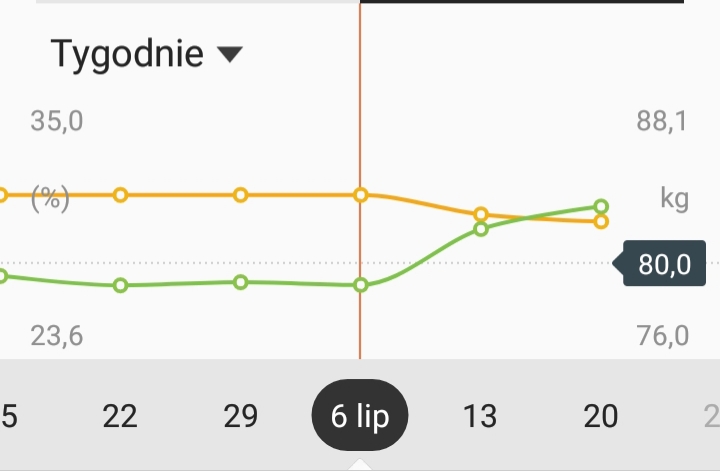 Actually there are 2 reasons this is occuring..

#1 let's assume your scale is accurate.. then this means you're losing muscle mass, if you're losing weight but Bodyfat goes up. Bodyfat is a percentage of your total weight, but muscle, fat, and water account for your weight.. so make sure what your losing is actual fat. See below how to.

#2 the scale is inaccurate.. the most accurate way to measure Bodyfat without going to get a dexa scan or something is using Bodyfat calipers and measuring your Bodyfat using the 3 point or 7 point test and plug your measurements into a Bodyfat calculator online. Be sure to be persistent with the same method, as it is most accurate if you keep doing the same thing.

try measuring your waist, stomach, or fat measurements using the method in #2, and keep track of your measurements rather than actual bodyfat

The fact that the impedance scale can't tell your bodyfat whether your a man or woman shows how inaccurate they really are.

Bodyfat impedance scales work by sending an electrical pulse through your body. It measures the amount of resistance that the pulse encounters. It then performs some analysis to determine who much of that resistance is caused by fat, muscle, water, etc.

Since everything in your body produces some form of resistance, the scale can't determine what is causing the resistance very well. It just guesses. Woman typically have a higher bodyfat percentage than men naturally. Men typically will naturally have more lean mass than women. The scale just assumes that men will have lower body fat percentage and more lean mass so it assumes that some resistance is caused by lean body mass rather than fat. It may in fact be very wrong.

I've also seen scales where you have to put your activity level. If you say that you're "very active", it would just subtract the body fat percentage because it assumes that a very active person has more lean mass.

The best use of those scales is to track progress over time. It's a very cheap and quick solution. The errors that it produces will be there same each time you use it (unless it automatically changes your gender), so you can see if you're gaining or losing fat. The number itself should not be taken seriously.

Not the answer you're looking for? Browse other questions tagged weight-loss body-fat or ask your own question.

56
What exercises should I perform to reduce fat on a specific area of my body?
6
What is the difference between swimming and running?
2
What is the difference between 'Burning Fat' and 'Burning Calories'?
3
Difference between cutting calories and cardio (with regard to fat loss)?
4
relationship between power and body fat
4
Lost 4 kg after 1st month of gym, then it stopped and I did not lose a pound after that. Was my second month of training a total waste? why is that?
1
sweating and body fat
1
Correlation between Sweat and fat burning