How do you keep the barbell close to your legs when doing the Romanian Deadlift?

In the Romanian deadlift, you must keep the barbell pressed against your legs, in order to minimize the stress on your lower back.

Now take a look at the below picture of the RDL being performed: 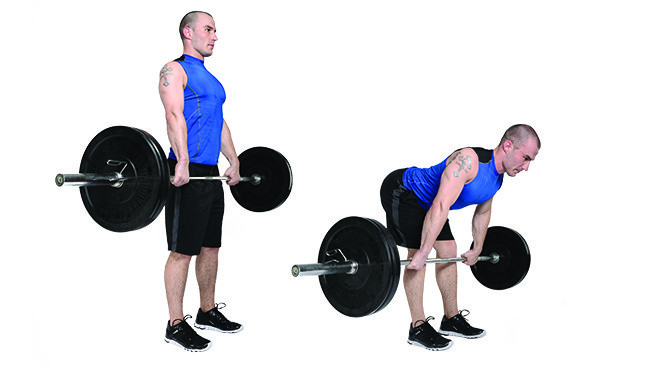 Is it just me, or does it look like the barbell is UNNATURALLY placed against this man's legs in the second picture? When I perform the RDL in this manner, the barbell naturally DRIFTS AWAY from my shins and hangs in free air, adding TONS of pressure on my lower back.

The only way that I can perform the RDL and naturally have the barbell be pressed against my shins is if I perform KNEE FLEXION, i.e. bend my knees a bit so that rather than pushing my hips BACK, I am also slightly sitting down. This will allow the barbell to be naturally pushed against my legs.

In fact, this is exactly why in the conventional deadlift, the barbell is always against your legs: because you have knee flexion. Now I am not saying I need to have as much knee flexion as in the regular deadlift ... just a wee bit more than the man in the picture above, whose legs are practically straight.

So my question is, how in the world do you keep the barbell close to your legs when doing the RDL? This seems to require a bit of knee flexion (although this may depend on your body type) but knee flexion is not ALLOWED by the movement itself!! It's an paradox

To provide evidence for my claims, look at this fella performing the RDL as I would perform it: notice the EXTENSIVE knee flexion that this fella has in order to keep the barbell close to his legs. This knee is flexed WAY MORE than the blue guy above. 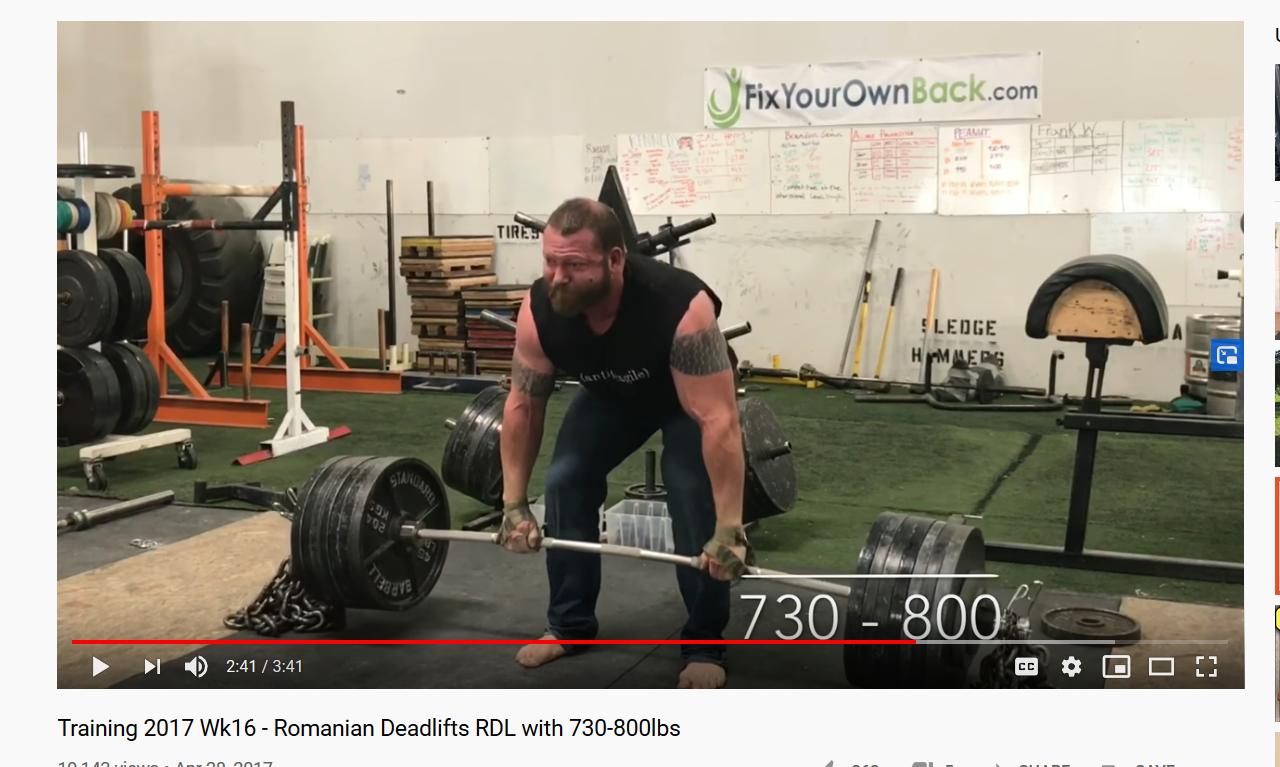 Romanian deadlifts are not synonymous with stiff-leg deadlifts. In the Romanian deadlift, we hinge at the hip and rock backwards, allowing the knees to bend only enough to align our combined centre of mass with our base of support—that is, somewhere between our heel and forefoot, and ideally midway.

For large loads—those that are high relative to our body mass—the bar should be suspended over our feet. To achieve this, the knees should be supple, and tibias vertical or slightly aft-tilted. (That latter point is perhaps the key distinction between a Romanian deadlift and a conventional deadlift.) The hips do not fall significantly in height.

With relatively small loads, the bar may pass forward of the toes since our body mass counterbalances the mass of the barbell. In such cases, our combined centre of mass remains over our base of support.

To answer your first question, yes, in the stock image above, the lifter is pulling the bar towards himself unnaturally—something that could easily be corrected with a minor adjustment to either his degree of knee bend or the angle of his tibias. However, his posture and position are otherwise excellent, and it is likely, given how close the bar is to his shin, that there is in fact no need for adjustment. His combined centre of mass would likely be above his base of support without it.

In reference to the second image, the caption may read ‘Romanian Deadlifts’, but that is not really what Duffin is performing. He is performing what would best be described as a hybrid between a Romanian and conventional deadlift. Notable to his technique is the fact that his knees bend not only to centre the mass over his base of support, but also to lower his hips towards the floor. So really, it should not be considered in relation to this discussion.

Finally, though, it should be mentioned that names only exist to communicate a common idea. If, for example, Duffin and his colleagues understand that to be a Romanian deadlift, then the name serves its purpose. There is no ‘right’ or ‘wrong’ technique, only right or wrong for our agreed understanding, or for a specific purpose.

You're allowed to bend your knees in RDLs. I think if you look closely in the first image, you'll see the guy is bending his knees slightly too. Although he has short femurs so he doesn't have to bend as much.

You perform an RDL by unlocking your knees and pushing your butt back as you would a deadlift. It's about creating a hip hinge so that you can lower the bar while maintaining a flat back. You shouldn't be lowering your body as you would in a squat. If you push your butt back, you'll bend your knees, your femurs will move back with your hips and your shins will stay straight. If your knees push forward, then you are not performing a hip hinge. You are lowering down to position.

you either let it hang or contract the upper part of your dorsal muscles to pull the bar onto your legs.

the latter version puts the latissimus dorsi in a weaker position which causes more hypertrophy but also makes you lift less weight.

both versions train the latissimus dorsi because the same muscle can also extend the spine, but the latter has a double isometric hold, the lats are not just isometrically contracted to keep you straight but also to keep the bar glued to you.

haver you ever seen a front lever or a straight arm row? same logic, but with deadlifts. depending on who you ask, one version is better.

in your opinion what is better? lifting the most amount of weight possible or getting the strongest muscular contraction, activation and better control overall?

both are good and bad depending on your goals and sport.

Not the answer you're looking for? Browse other questions tagged exercise-technique deadlifts or ask your own question.

13
What is the correct form for a deadlift?
10
Help with deadlift technique - bruised shins and knees
5
Deadlift form and individual morphometry
3
Deadlifts - should my legs ache?
4
What is the difference between a Deadlift and a Romanian Deadlift?
1
Unable to keep lower back straight during Romanian Deadlift
3
Does the "stabilization argument" also hold for pull exercises?
10
At the top of the deadlift (i.e., when you have picked up the barbell), are you supposed to roll your shoulders back?
16
Why is "squatting the deadlift" bad?
2
Should the barbell touch my shins in deadlift?