Front squatting: sit 'back' or sit 'down'?

I've done plenty of front squats over the years, and a lot of those times were during PT sessions where I had a trainer to watch my form... and never really had any problems.

Lately I thought I'd film myself just to check what my form was like, as I've read guides online saying you shouldn't really sit 'back' into a front squat like you would with a back squat, and that you should instead focus on sitting 'down' so that you can maintain an upright torso.

Am I doing something wrong in either case? or should I just stick with how I've been doing it for years?

Edit: Below is a photo of me squatting by sitting 'down' as per the guides I've read online.

My back looks more neutral this way but notice me knees are tracking past my toes slightly. It also feels really weird having my quads do all the work, I worry it might give me knee problems 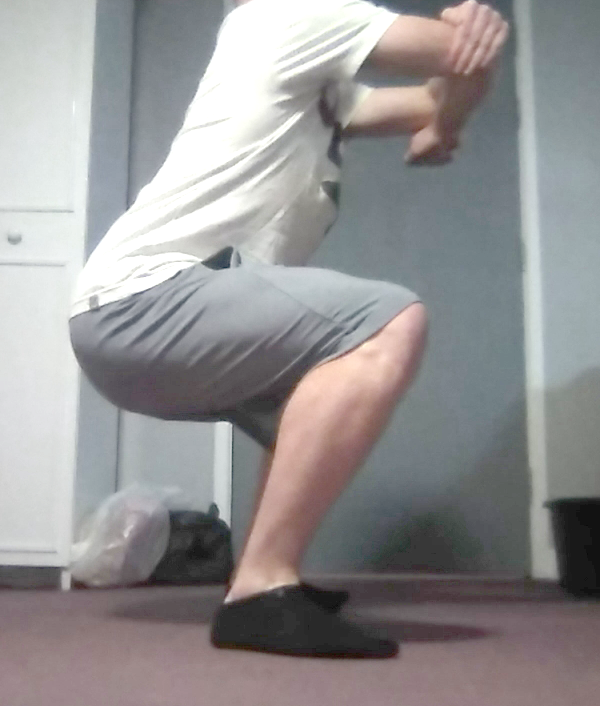 You should be sitting "down" rather than "back" in a front squat.

"Sit back" is a cue used in powerlifting for the low-bar style squat, especially in equipped powerlifting, where using maximal hip flexion (and hence strong forward lean of the torso) and minimal forward knee travel helps get the most assistance out of the lifter's squat suit. For a front squat, the aim is generally to keep the torso upright so that the weight of the bar can rest on the shoulders, rather than needing to be held up by the hands. This necessitates a lot of forward travel of the knees. If a heavy front squat were performed with minimal forward knee travel and a strong forward lean of the torso, the weight of the bar would shift to the hands and the bar would most likely then be dropped.

Note that there is absolutely nothing wrong with your knees moving forwards beyond your toes. In fact, Olympic weightlifters wear shoes with elevated heels designed to allow increased forward knee travel! 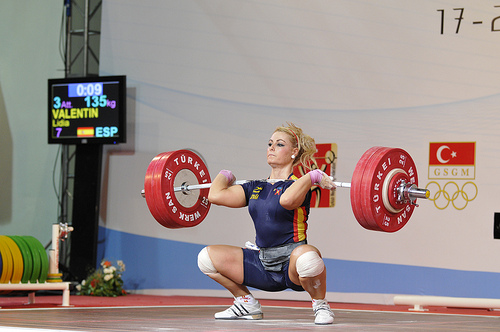 The quads and upper back muscles are typically the limiting muscles in a front squat, so you can expect to feel fatigue in those. You should not worry about developing knee problems, because the only consequence of a squat style that puts the demands primarily on your knees is that your knees will be the limiting factor in how much weight you can lift. There is no more potential for causing knee problems by performing a knee-dominant lift than there is potential for causing elbow problems by doing bicep curls, or shoulder problems by bench pressing. Overuse injuries are caused by excessive volume, not exercise selection.

Finally, if you want to develop your glutes, front squats are not a great choice. Consider adding deadlifts, RDLs, or hip thrusts to your routine for that.

If you were to sit back in a front squat, you may lose balance as the weights are now acting in front of your centre of mass. I would also like to highlight again that there is nothing wrong with the knees coming forward, as long as it is not excessive. It is just how we move biomechanically.

You can see this great article by Squat University on the front squat: https://www.google.com.sg/amp/s/squatuniversity.com/2017/08/08/is-your-squat-quad-dominant-or-hip-dominant/amp/

7
strengthing and improving flexibility in heels
4
My leg pinches in to my hip when squatting
15
Why am I falling back when I am squatting?
5
Should I squat ass to grass before adding load?
1
evidence based 'how to squat guide' and gym more generally
1
Why isn't barefoot squatting recommended?
2
Squats: point feet forward and externally rotate hips?
1
How to correct muscle imbalance in front half vs back half of my body